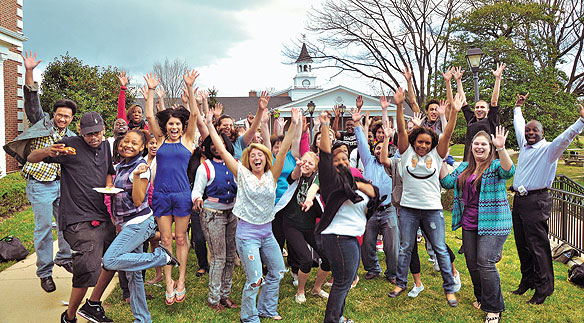 Palm Sunday – occurring on March 25 this year – always reminds me of a radio-interview I heard during the 1990s, when we lived in New Jersey. The interviewee had witnessed the events that he related. He didn’t name the college or the year, so I can’t verify his account. But I have recorded it here approximately as he told it.

Some have called this an “urban legend” – a myth whose frequent retelling gives it a patina of truth – but I disagree. There is too much about this account that rings true. The reader will judge for himself. Here’s the way I heard it –

My college chemistry prof was Dr. Harris (as I’ll call him). He was a good chem teacher, but a very cynical man who was hostile to all religion – particularly Christianity. He liked to ridicule any students who seemed religious. Girls wearing the cross as jewelry were often targets of his sarcasm. Ditto for anyone displaying the Star of David. They learned not to wear such symbols to his class. Carrying a Bible into that class would have constituted “academic treason” and resulted in expulsion into outer darkness. No student would have dreamed of answering back to the prof on “the religion thing.”

Part of Dr. Harris’s atheist-shtick was an annual classroom demonstration he called “God is Dead” or “God is Powerless.” He would fill an Erlenmeyer flask – the kind with a narrow neck and wide bottom – with water and hold it aloft before the class. Then he would invite any “believers” to come forward and pray for the flask’s deliverance when he dropped it. No one in living memory had ever taken the challenge. Of course, the flask would smash to shivers when he let it go.

Prof Harris obviously thought this was intellectual high comedy. The class would laugh at his wisecracks about the stupidity of belief, and religion being a “social opiate” – something Lenin said, I believe. We would then move on to the day’s lessons.

One guy in our class was different. He seemed like a country boy – unhip and plain-spoken, not cynical and profane as we were. Joe was always genial and pleasant, but my crowd didn’t hang out with him. He wasn’t really our kind of guy. We knew he read the Bible every day.

The whole campus knew the “God is Dead” show was coming up in Prof Harris’s class. I saw no indications of anything unusual, being too busy ogling the girls in our class. But a couple of my buddies later said Joe looked “intense” as we took our seats on Der Tag.

When Dr. Harris held up the flask and asked if anyone wanted to pray for its survival, Joe stood up. Obviously surprised, the Doc simply gestured for Joe to come forward. We were all shocked. A hush fell over the class. The comedy had gone completely out of the shtick.

Joe closed his eyes and said a simple, one-sentence prayer in a firm voice – not dramatic or contrived, as I had heard some ministers pray. He seemed to be talking directly to an important person he knew. To me – not a believer in much of anything at the time – his words seemed like the sudden flare of a match in a dark, dark place. Goose-bumps arose on my arms and neck. A palpable presence was there. In retrospect, I believe it was God’s Spirit.

“Lord of the universe, Maker of heaven and earth and everything in it,” Joe prayed. “I ask you to show this wicked and ignorant man the power of the Living God.”

When Joe finished, the class was very, very still – as if holding its breath – and Dr. Harris had a most peculiar look on his face. Without a word he let go of the flask.

But the whole process of Joe standing up, coming forward and praying had taken just enough time so that the neck of the flask must have stuck slightly to the prof’s thumb, as can happen with a glass container. So instead of falling straight down, the flask flipped toward him, hit his knee, and fell onto his shoe. It rolled, intact, onto the floor and the water began to spill out. 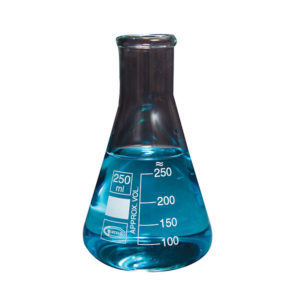 What happened next was even more incredible. There was what I would call an “electric moment.” Then, a great cheer went up from the class. Laughing and yelling, we surged forward and surrounded Joe. Guys who had barely spoken to him in the past clapped him on the back and tousled his hair. Some girls were crying. Others embraced Joe and kissed him. It was like nothing I had ever seen – not like celebrating a football win, but joyous and very personal. Later, when I knew a little of the Bible, I thought the raising of Lazarus must have been a similar scene.

An irresistible procession then swept Joe along and carried him out into the quadrangle amid more cheering and lusty singing. Heads popped out of windows around the quad, and soon scores of people joined the celebration, which lasted for hours. It was probably the closest thing to a revival that college had ever seen.

In the wake of the Miracle of the Flask, Dr. Harris was much subdued about the campus. He never repeated the “God is Dead” demonstration, and he seemed to have lost all interest in taunting Christians. Eventually, he moved on to another school.

Joe seemed puzzled by all the hoopla. Once, I heard him insist that he hadn’t really done anything. But one of his buddies said, “You did do something, Joe. You believed. And you stood up when God needed someone to stand up!”

Gradually, the event faded away. We went on with our lives and careers. Wags joked that Prof Harris probably smashed the offending flask to prevent it from becoming a religious “relic.” And cynics later said the “celebration” was just college kids skipping class and horsing around.

Maybe so. But we who witnessed the actual events had a distinct sense that we were celebrating our liberation from whatever dark spirit had been haunting Dr. Harris and, by extension, ourselves. Later, convicted by Scripture, I became a Believer, too. I came to understand what the God of the Flask, as I sometimes called Him, was capable of.

For that brief time, Joe was God’s Man on an obscure college campus that needed to be freed by God’s power. And we saw something of what the Triumphal Procession of Jesus might have been like. I doubt if any witnesses, including Dr. Harris, ever forgot it. I’ve lost track of Joe in the years since, but the thrill of that simple event and its amazing aftermath has never left me. I hope the faith Joe showed that day has never left him. God bless him!

Every Palm Sunday it all comes back to me. In my mind’s eye I see Joe standing there. A match flares up suddenly in the darkness. Water spills from a flask. And students dance and laugh and sing and weep because they felt the Breath of the Lord as He passed by… 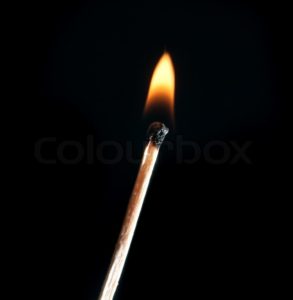 This myth/legend/farce goes back almost 50 years and it has no basis in fact. Sometimes it’s a beaker, sometimes it’s a piece of chalk. There are many versions. Not one person has even attempted to attach it to an actual professor or college. Ever.

For the love of God sir, have you no shame in your blind adherence to the world of Brietbart, Fox and Trump?

Here’s the Snopes article on this nonsense, just in case anyone here is interested in reality:

God is good, all the time.

Thank you WZ, just what the doctor ordered heading into Holy Week. The Living God is a God of miracles – just look around you at the created order. His fingerprints are everywhere.

I love this story!! Thank you so much for sharing.

Miracles can be very simple things or really profound. Atheists, unfortunately for them, seldom see the miracles around them and cannot admit they exist even when confronted with them.

There is actually another miracle in this story and that is what happened to the professor. He was confronted with an unexpected miracle and had no explanation for it. His “faith” in secular humanism was utterly shaken – and he will never really be able to shake what happened unless he turns to God. What a dark place to be in when there is so much light around.