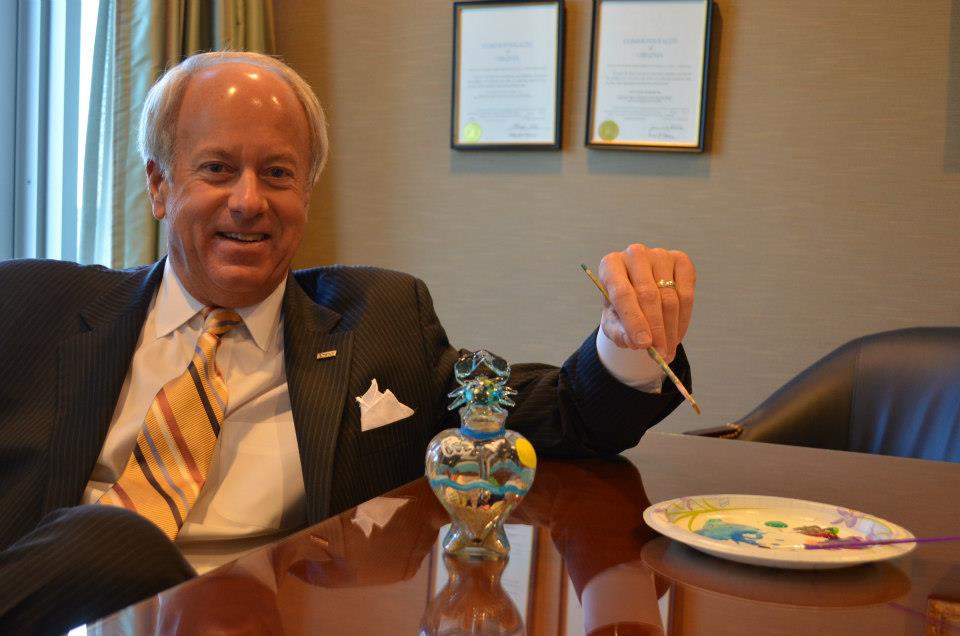 Virginia Beach Mayor Will Sessoms appears to have violated provisions of state law designed to keep public officials from taking official actions where they may have a financial conflict of interest. This revelation comes just weeks after this man, who poses as a Republican, extolled the virtues of the “Virginia Way” when he endorsed Mark Warner over Ed Gillespie. [read_more]

According to the Virginian-Pilot, Sessoms—who also serves as president of TowneBank—has on numerous occasions voted on the Virginia Beach city council in ways that benefit his bank, usually by providing benefits to developers using loan proceeds from TowneBank:

In all, Sessoms voted at least 60 times on actions involving businesses, developers and individuals who received TowneBank loans. He rarely recused himself from voting and never disclosed that he was personally named as a trustee on more than $90 million worth of the loans…

Sessoms is prohibited by state conflict-of-interest laws from voting on any issue in which TowneBank has a direct financial interest, a point he acknowledged in at least 15 disclosure letters he filed while abstaining on votes. He pledged in a March 24, 2009, disclosure to “thoroughly review each City Council agenda” to identify TowneBank clients who may pose an “actual or potential conflict.”

Diligent readers of The Bull Elephant will recall just what kind of “Republican” Will Sessoms is by his whole-hearted participation in the Virginia Beach slating controversy. As we have previously written,

[A]ccording to eyewitness testimony, well over 100 municipal employees were provided transportation to the mass meeting venue, and during the proceedings appeared to blindly follow the signals provided by their boss, Virginia Beach Mayor Will Sessoms. I am not a fan of the term RINO, and think it is ridiculously overused (most times improperly), but in the case of Sessoms, the shoe fits.

If this is the “Virginia Way,” then Republicans should have no part of it.

Luckily, there is a bit of a bright side. Because Sessoms executed a statement of intent to support the GOP nominees this election when he participated in the March mass meeting where he helped to slate off hundreds of real Republicans, he is now barred for 4 years from official membership, according to Article I(A)(2) of the Republican Party rules. So, while there may be little we can do to keep him from calling himself a Republican, we don’t have to worry about him trying to slate again in 2016, or vying for the Republican endorsement for mayor. [UPDATE: Reader Max Schapiro indicates the position of mayor is non-partisan, and that while this kind of thing might be new to people not from Virginia Beach, these issues have been raised for years about Sessoms.  Read his comment below.]

Regarding the statement, “we don’t have to worry about him trying to slate again in 2016,” I ask, “why not?” One did not need to be a member of the party to attend and vote at the mass meeting, which makes no sense to me, and which is how some organizers were able to bring in busloads of people.

Has he actually been charged with anything or are these accusations?

Sessoms for Mayor , Obama for President… With Republicans like Sessoms, who needs Democrats?

The rest of us

There is no Republican nomination for Mayor, we have non-partisan elections in Virginia Beach. This information about him is nothing new, both the corruption and the supporting Democrats. He should have already been banned for 4 years for supporting Warner in 08, and McAuliffe and Northam in 13. He quit the City Committee in Mid-2013, he never should have been allowed in the Mass Meeting to begin with.

Back in 2012 Rigell and Sessoms’ campaign operations heavily overlapped and he allegedly raised close to $1 million for Rigell. Should be interesting to see how he handles this.

And just because, here’s a video that Jared Hendrix and I made in 2012 for Kenny Golden’s campaign that highlights some of the best Will Sessoms/VB City Council conflicts of interest.

Thanks for the clarification, Max. I’ll update the post accordingly.