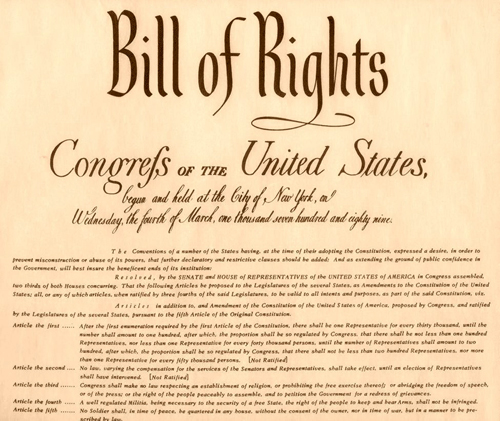 Antifa hostile to the Bill of Rights

The ANTIFA movement has issued a declaration of war on the Constitution and Bill of Rights.  Let’s look at each element of the first two amendments and see how Antifa has proceeded to date:

Against Freedom of Religion:  Mainly underreported is that Antifa has disrupted and threatened to attack Christian events.  Recently, Antifa threatened a Catholic Men’s Conference in Michigan.  Within the past few days, vandals, most like Antifa members, defaced the statue of St. Junipero Serra across from Mission San Fernando in California.

Against Freedom of Speech:  Antifa has shut down conservative speakers on campuses around the country.  The Antifa violence at the University of California Berkeley is very well documented.  Often, because of the fear of such violence, college administrations impose exceptional security requirements on those organizations that invite conservatives to speak.  This permits a left biased “heckler’s veto” to dominate events.

Against Freedom of the Press:  The Antifa propaganda has been accommodated by the leftist press.  CNN and MSNBC, among other news organizations, have interviewed members of this violence prone organization and have tended to favorably report on or excuse them. (CNN revised the title of an Antifa expose’, eliminating the phrase “seeking peace through violence”.  Antifa objected and threatened violence against CNN if this was not done).  Not surprisingly, many Democrat Party representatives excuse the Antifa actions and blame everything on President Trump and his supporters.

Against Freedom of Assembly:  During the run up to the presidential election, Antifa struck with violence against Trump supporters.  Most notable in this regard was the violence in Chicago but similar violent incidents occurred in Blue States wherever Trump supporters tried to rally.  These disruptions have also focused on “Freedom of Speech” events around the country.  The Antifa threats caused cancellations of such events.

Against the Right of Self-Defense:  Antifa invariably attacks the police.  As seen in Charlottesville, the police give way either to protect themselves or under orders not to intervene.  As seen in Boston, when police try to separate opposing sides, they end up being assaulted or injured by rocks, bottles, sticks, urine, and feces.  Antifa comes prepared to fight opponents even when neo-Nazis are not present.  This violent intention has led opponents of Antifa to come armed as well.  The likelihood of injury and death increases with every incident.

The Constitution is what makes us Americans.  The Bill of Rights is what gives us our freedoms.  Antifa is a direct and deadly threat to both.

Antifa hostile to the Bill of Rights was last modified: August 23rd, 2017 by Dr. Robert Warren

Antifa is going to rock this Nation.
And beating down the Dumba$$es on the alt white is something that should have started in 16.
The Fat Bastard is going down in flames. And the right is to ate up to know what to do.
Actually, beating the sh¡t out of dummies dressed in plastic Power Rangers outfits, sounds like a great weekend!

Antifa? Righto! That’s the biggest threat we face, apparently, or at least the only issue discussed here, fiddling while Rome burns.

It’s a distraction. Of course we oppose violence and lawlessness. Arrest the perpetrators! We have police for that, but stay focused on the killing and the maiming, right? Or do you leave that to the left?

1. Bank Runs Dry: Our government is running out of money while POTUS drains the budget. Took over with $350 billion in the bank, and that’s close to gone, $85b remaining with a $70b military pension payment due 29 Sep. Solution proposed is printing more cash and building a wall POTUS swore the Mexicans would fund.

2. Health Insurance Disappearing: Some Virginians are about to lose access to any health insurance at all thanks to POTUS failing to meet ACA promised payments to insurers. Of course they’re pulling out of markets! POTUS will not meet the committed funds to cover losses, totally by Republican design.

3. Russian Interference with Elections: Good conservative prosecutors have raised the alarm: There is clear evidence of Russian attempts to interfere with otherwise free elections. Where will Mueller go? That shoe is dropping every day, but little discussion because … well, antifa? Anti-fascists? Arrest them and move on. Charge them with their crimes.

Why continue this list? Isn’t there a government to run? But, no, antifa … antifa … Warmac9999 says the killer didn’t kill as many as he coulda, antifa, and he says if you watch Death Wish and learn from bernie Goetz and study the OJ trial … antifa … antifa … SNORT! those were no assault rifles!

You fiddle while Rome burns. Oh, and meanwhile POTUS hopes and prays for war hero John McCain’s death, dumping on Republican Senators Flake, McConnell, even his buddy Paul Ryan. Has he no sense of shame?

What a pile of snowflakes. Arrest the miscreants and please, run the government.

You are not a republican and have admitted as such. Your consistent refusal to condemn antifa activities or blame shift makes you a leftist and likely a perfect antifa.

I condemn violence and law-breaking from any POV and specifically call for the investigation, arrest, prosecution and long sentencing of Antifa. Make it happen, but stop talking about it as a substitute for doing something about it. Otherwise its fake news and a distraction from the problems at hand.

I am not your kind of Republican. Indeed, I find both parties lacking. I am conservative, however. I’ve voted for many Republicans. How many Republican parties are there? Which one ought I support?

If sycophantic support for any of the many Republican parties — and they are a very divided bunch — is a criteria for TBE involvement, no one will be allowed to post here. No one. This place has opened my eyes to the origin of anti-Republican unity attacks.

You have met the enemy and it is you.

You refuse to define yourself. Claiming to be a conservative is really quite a stretch. You are more in the anarchist libertarian camp and, today, that is antifa in general.

Can you not walk and chew gum at the same time? Yes, some of what you mentioned are issues, but Antifa and the similar groups are also a legitimate concern. Perhaps you should do some research on said groups before dismissing concerns.

And while I agree with you about our overspending, healthcare, etc., you wrote as though these are all the fault of POTUS. The last POTUS doubled the debt, and put us on the path to far more debt with the ACA. And the ACA was already imploding prior to Trump’s election because of it’s very design.

Russia has attempted to interfere in our elections for years (just as we interfere in theirs). We knew about this in prior elections, and in this one long before election day. Why was this only news after Trump was elected?

Oh, now you are full of insults. Fine. It will be reciprocated.

Are you too stupid to read the law and determine who is responsible for the budget? Or did you fail civics? How did POTUS do that by himself? Perhaps you should do some research.

You are soft on Russia. You might be a Russian. How would we know when you have a fake profile?

How did POTUS do that by himself?

Now that’s an excellent question, and is exactly the point I was making. However, in your original comment, you claimed POTUS was responsible for everything. Do you change your position, just for the sake of arguing?

If a private profile makes me Russian, then you are clearly a Russian as well.

No, I look for inconsistencies, amongst other things, and that one is glaring.

We’re both Russians! Welcome, comrade! Russian cats are the best!

“Inconsistencies” is not specific. What exactly do you believe? Which of the two stances you’ve taken is what you truly believe? Do you have any core values?

About this I am curious because I do not recall saying POTUS “was responsible for everything.” I do now believe Republicans own the federal government, controlling as they do both house of congress and the White House.

POTUS has continued to spend, spend, spend like a teen with a credit card. Build a wall, for example, or draining the Secret Service budget. It seems irresponsible. Why not actually cut back day one and not seek a debt limit raise? Now that would impress me, but the opposite is happening. And to think tax cuts are on the table while spending is on the rise seems completely irresponsible, cart before the horse.

If you want to see your own words, just follow the thread above.

I disagree that POTUS has continued to spend, spend, spend as badly as prior presidents. More than I wish, yes. More than others, absolutely not. Everywhere that he has proposed budget cuts, he seems to get criticized. Spending less also means that some agencies will be cut back. The State Department is one agency that he has cut. He’s enacted a hiring freeze for most agencies; he’s cut other agencies as well. He wants cuts to the ACA payments to insurance companies, but there’s an uproar over that too.

You cannot only cut discretionary spending. We must also cut entitlements, and healthcare in particular. The Medicare age will have to be raised; the expanded Medicaid that the ACA created will have to go. At a time when we already had budget issues and debt, Obama expanded Medicaid by quite a bit, which is unaffordable. Unfortunately, we will need to offer Medicaid only to those who were previously eligible. Offering Medicaid to the middle class is unaffordable.

The tax cuts are intended to stimulate the economy, which would result in increased revenue. If businesses grow, more sales mean more tax payments; growth in business means more employees who then pay more taxes. It’s a cycle that actually does increase revenue to the federal government, although it’s unlikely in the first year. However, you cannot avoid tax reform because of a temporary deficit. Tax reform is needed for simplification as well as to stimulate the economy.

You complain that POTUS is spending too much, but then complain that he’s cutting payments to insurance companies – all in the same post. If we are going to cut spending, it has to come from somewhere, and you aren’t always going to like where the cuts are made. Someone will ALWAYS complain about budget cuts. I suspect it will be you.