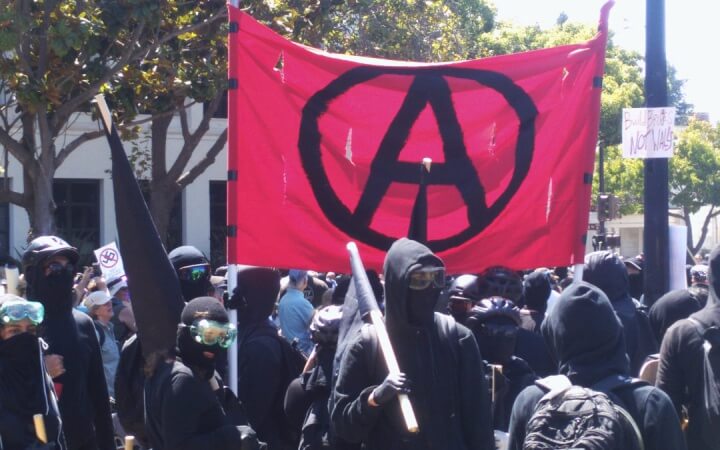 ANTIFA Then and Now

Over the past couple of years, I have written articles about ANTIFA.  My purpose was to warn about and also note their violent anti-Americanism.  Significantly, ANTIFA isn’t something new.  In one form or another, is about 90 years old.  Here is how it got started and continues today with much the same ideas.

ANTIFA was founded in the early 1930s by the Stalinist Communist Party of Germany.  Its purpose was to help the communists combat other political parties, in particular the Nazis.  At the time, ANTIFA favored the disestablishment of nation states through any and all means.  With the rise of the Nazis and then World War 2, ANTIFA basically ceased to exist.  However, ——-

ANTIFA ideas did not die.  In the 1980s, they resurfaced as a Marxist organization supposedly opposed to authoritarianism.  They allied themselves with violent guerilla organizations in Germany and around the world.  Within America, ANTIFA’s ideas and tactics are little changed from its 1930s beginning and from its German communist roots.

Under the guise of black liberation and anti-white supremacy, ANTIFA and its allies committed (and still commit) bombings, robberies, murders and riots.  They claim that all of these violent criminal acts are to right what they see as the wrongs of white supremacy.  (ANTIFA operates under the assumption that the United States was founded and still operates on the basis of white supremacy.  As such, ANTIFA views every American institution, most significantly law enforcement, as part of what needs to be destroyed.)

Over the past few decades, ANTIFA has wormed its way into the news, academic, entertainment and elements of the government.  Most recently, they have made inroads into Attorney General’s office thus given them much more freedom to violate criminal law with impunity.

With access to the internet and the modern transportation infrastructure, ANTIFA’s violent members can show up virtually anywhere and take advantage of peaceful protests associated with injustice.  They can very quickly turn a First Amendment protest into riotous chaos and anarchy.

ANTIFA is difficult to deal with because they operate as a very loose knit organization.  ANTIFA’s fluid leadership style supports guerilla tactics and helps develop relationships with similarly motivated groups.  This structure allows ANTIFA members and its allies to overwhelm governmental weakness – and Portland’s 90 day riot is among the most extreme example.

It is unlikely that ANTIFA will cease to exist any time soon.  In Democrat run cities and states, ANTIFA members are given the freedom to loot, riot and assault without fear of prison time.  Law enforcement in these cities has been neutered, and this is significant because many ANTIFA members are felons.  (In a number of cities, it is basically useless for the police to arrest because the courts will simply put those arrested back on the streets within hours or days.)

It is obvious that the Democrat Party sees ANTIFA as a mechanism for both suppressing Republican opposition and the national interests of the American citizenry.  Up until recently, the Democrat leadership said virtually nothing about the violence affecting the country.  What is now obvious is that the evil genie of ANTIFA can no longer be contained by its supposed Democrat masters.  It is now an openly hostile revolutionary force intent on destroying America, the Constitution, and anything that constitutes American exceptionalism.

If ANTIFA wins, communism and socialism will be instilled – and the USA will suffer the same fate as virtually every country that embraced totalitarian and authoritarian government.  Under the current circumstances, saving America is up to its citizenry.  ANTIFA will strike at any American’s livelihood, home and family.

ANTIFA Then and Now was last modified: September 2nd, 2020 by Dr. Robert Warren