We love the month of April at our house. My wife and I met on April 1, 1961. I tell my offspring that I was just a broth of a lad minding my own business on the bus of our college’s touring choir, when this beautiful babe “threw herself at me.” (My mother had warned me about this, but did I listen?) The wife tells the story a little differently, of course. But all turned out well. We were married sixteen months later.

But April is my favorite month for more than these romantic reasons of yore. I also love April because it is “tax month.” Yes, it’s true. I love that festive season of the year when we all spend many hours – or else pay tax consultants lavishly – to prepare our tax-returns.

Like most Americans, I approach the annual task with a distaste bordering on nausea. Why, then, do I “love” tax season if I hate doing my return, like anyone else? The answer is that as a political conservative I love the season because it’s one of the few times when all Americans must actually confront our ponderous, extortionate income tax system, as well as the reason we have it. That reason boils down to Envy. How envy spawned the ongoing nightmare of the Income Tax is a cautionary tale for all of us. With income tax policy again being hotly debated, I present a brief review of how we got here.

In the early 20th century a gold dollar bought far more than today’s inflated greenbacks. But earning a buck was pretty tough. Many workers earned just a single dollar for a long day of toil. Maids and other servants made less. Orphanages and poorhouses housed people who were destitute, but there was nothing like today’s “safety net,” which provides significant income and in-kind services for prolonged periods. Without work, circa 1900, you were in deep trouble. Many people in such circumstances, including thousands of children, lived on the streets of great cities without shelter or wandered about as vagrants.

By that time, a few industrialists, miners, bankers and railroad tycoons had made vast fortunes in emerging industries like steel, oil, railroads and manufacturing. In that severe economic environment, the spectacle of rich people ostentatiously displaying their wealth in mansions and kingly living styles generated resentment among the millions who were just scratching along. Populist politicians began to fan the flames of envy to gain political advantage.

This produced two political initiatives. The first was “trust-busting” – a government-led effort to break up monopolies which could threaten the economic health and security of the nation. Those monopolies caused some prices – which now seem low from our inflated vantage point – to be very high. Gasoline, for instance, seems expensive now. But its price early in the century was actually far higher than today’s. The price of gasoline, if translated from 1910 into today’s cost of living and wage levels, would be around $10 a gallon. At a time when people earned $1 a day, a man could spend a whole day’s pay filling his tank with 20¢ a gallon gas – if he had a car, which was unlikely if he earned $1 a day.

The second initiative launched against the “malefactors of great wealth” (as the rich were popularly tagged) was the income tax. Conditioned, as we are, to having a quarter of our pay “withheld” as tax, before we even see it, we can’t grasp that this was not always so. At the dawn of the 20th century, people actually took home their full earnings on payday. The man on the street could imagine nothing else. (They didn’t know when they had it good.) Major funding for the federal government came from import duties and excise taxes.

Thus, a few high-profile rich people, like the Carnegies, Vanderbilts, Rockefellers, Goulds, etc., had accumulated fortunes in the hundreds of millions without paying a farthing in tax. This is impossible to imagine today, and was becoming unpalatable then. People who complained that others had made so much money without paying any tax failed to notice that they had not been taxed, either. Voila! “Envy politics” had been born.

An income tax was imposed during the Civil War, but it was phased out in 1872. In 1894, farm- and labor-discontent spurred enactment of a peacetime income tax. Pressured by trade associations, Congress passed the Wilson-Gorman tariff bill, which included an income tax. Soon after enactment, however, a conservative Supreme Court ruled the tax unconstitutional (Pollock v. Farmers’ Loan and Trust Company), pronouncing it a “communistic threat” to property.

But the dogs had been let loose. During the Progressive Era, political sentiment for the income tax grew so strong that in 1909 President Taft proposed amending the Constitution to permit it. An amendment was drafted giving Congress authority to impose taxes on the proceeds of any lawful business without apportionment by population or equal treatment of all taxpayers.

Support for the amendment came from a coalition of:

By February 1913 the Sixteenth Amendment had the approval of the required three-fourths of the states. The nose of the Income Tax camel was under the tent.

Of course, those original rates, which seem idyllic now, didn’t last very long. The top rate quickly leapt to 77% during World War I. By the 1950s – within my working lifetime – the top tax rate was actually 92%. Naturally, very few incomes were subjected to that rate, since people earning at this level could buy advice on how to shield their income from taxation.

Data from the Congressional Joint Committee on Taxation shows that income tax rates have been adjusted (by my informal count) no less than 56 times over 100 years. An abbreviated table of tax rates in the lowest and highest brackets is furnished below.

Wars or not, however, the Democratic Party clearly favors “soaking the rich,” while Republicans tend to lower rates whenever possible. In 1988, rates reached their lowest levels since 1930 when just two income brackets were established, with rates of 15% and 28%, respectively. As few as two rate-strata had never before been established in the entire 75-year history of the income tax. (Naturally, it was too good to last.)

The years 1954-’63 represent the longest period of stability in the tax rates. Tax-withholding – previously mentioned – was first established during World War II. President Roosevelt vetoed it, but it was passed over his veto by a savvy Congress that realized half of the country would be in tax-default at year-end, unless taxes were pre-collected.

Although tax legislation of recent years has exempted increasingly higher levels of income from taxation, the fact remains that millions of non-rich citizens today are taxed at rates reserved for zillionaires in the early years of the 20th century.

Many inferences could be drawn from the data. Suffice it to say, the April Fool joke is on us for thinking we could establish a tax that would touch only “the rich.” We shouldn’t have done that. The Bible says Envy is a sin. The Income Tax amounts to visitation of the “sins of the fathers on the 3rd and 4th generations.” We need to learn from this and not repeat the error. In this vein, the signs and portents we see today are not encouraging,

Even reckoned in strictly secular terms, envy-based public policy usually comes round to bite us in a painful place. Keep the income tax in mind the next time you hear a politician say he’ll make the other guy pay “his fair share.” The “other guy” will eventually be You.

We should know this by now, but a hundred years on we still haven’t learned it. 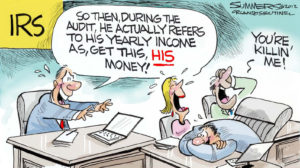