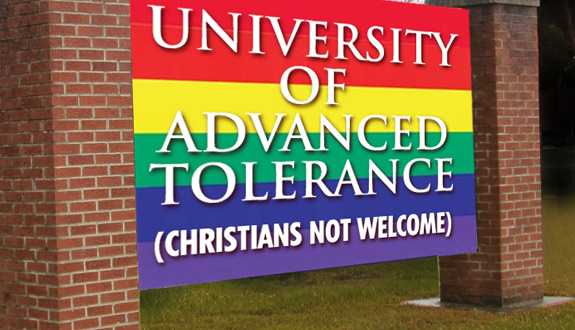 Are Democrats becoming the anti-Christian party?

Republicans are more likely to express suspicion and a dislike of Muslims than Democrats according to this poll during the 2016 campaign.

Republicans fear the encoroachment of sharia law in our U.S. common law.  By contrast, Democrats fear the influence of “The Christian Right” – not just on abortion, marriage and gender issues, but even bills that seek to ban the extreme Muslim practice of female genital nutliations (FGM).

Below are some examples of what some rank- and-file Democrats are saying and posting on Facebook.

One Democrat posted an outrageous column from a British group ChurchandState.org, entitled:

“Its time to start calling evangelicals what they are – the American Taliban.” 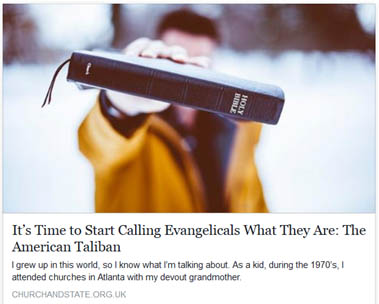 I took the analogy to task.  How can one compare every evangelical to the onetime rulers of Afghanistan, which would round up women accused of adultery and kill them before cheering crowds?  I wrote:   “That’s like people who compare the IDF (Israel Defense Forces) to Stormtroopers.”

“I found the Evangelical! (meaning me) …If you are looking for proof of the power of Evangelicals, look no further than AIPAC. [American Israel Public Affairs Committee).”

When I told her I was Jewish and a staunch Zionist, she was silent.

Another Democrat friend posted this on his page:

“The idea that we could lose our freedom by succumbing to a wave of religious hysteria, I am sorry to say that I consider it possible….there has been a sharp rise in strongly evangelical sects in this country in recent years, some of which hold beliefs theocratic in the extreme, anti-intellectual, anti-scientific, and anti-libertarian.”

I asked if he felt the same way about extreme facets of sharia law creeping into U.S. common law and he said that the whole sharia law concerns of Republicans was unfounded.

I agree that the fear of sharia is overblown, but shouldn’t legislators and judges be vigilant in ensuring some extreme practices of Islam  are not codified into our laws?  Haven’t more people been murdered in the “name of Islam” than in the name of Christianity in recent years?

One of his compatriots disagreed, writing that there are divisions in Evangelicalism citing, “The ‘grace alone’ folks and folks who wish to mandate your breathing pattern…  The fact that their largest sect is pretty seriously split we are safe for now.”

“Safe from what, may I ask?   Christians aren’t blowing people up and chopping off heads? No. its Muslim extremists, yet you say nothing about our “safety” from jihadists that abuse the good name of Islam.”

I used Nigeria’s Boko Haram in Nigeria as an example.

Well, a feminist and abortion rights chimed in:  “For every Boko Haram, I can point to a  Children of God cult.”  This is a cult that was sexually abusing children for years, which is awful, but Boko Haram has killed about 6,000 and captured girls to be sex slaves.

As for genital mutilations, she wrote:

“I’m wondering how you would feel about a similar law banning circumcision? It’s similarly barbaric, done without consent, and nearly ubiquitous in this country. Why is it considered different from FGM?”

I could not believe what I had just read — A feminist equating circumcision of an infant boy with destroying a female’s genitalia.  Then, another woman said this about Boko Haram:

“I think the problem of Boko Haram has more to do with the instability of West Africa (due to climate change and fighting over oil resources) and less to do with religion. If you are desperate in life, then all your actions become desperate…”

I thought Liberals were supposed to be smarter.  🙂

A day later, the same person posted an article about a  Christian man killing his daughter for dating  a Muslim.  I inquired again “do you post about Muslims killing Christians and Jews?”  He had no explanation.

The reality is that despite some 40 years of lobbying by Christian groups to ban or curtail abortion, abortion is still being performed in all 50 states and gay marriage is legal in all 50 states, too.  Evangelicals, while influential in the Republican Party, comprise just 29% of the U.S. population.

So, what is to fear about Christian activists on Capitol Hill and in state capitals?

First, “Progressives” are brainwashed by the secular forces of the media, Hollywood and academia such as writings like this  secular elitist columnist in the Washington Post or this  Harvard Law prof who compares conservatives to Nazis.  This leads liberals to believe Boko Haram is the result of “climate change” not Islamic extremism and that conservative Christian denominations are bastions for intolerance.

Second, Christian teachings are a threat to  multiculturalism, secularism, centralized governmental power and the valueless entertainment industry, which funds a lot of Democrat campaigns and liberal groups.

Fortunately, a few liberal writers and academics have stepped forward to try to change the elitist attitudes of their brethren.  There is even this new book:   “White Working Class: Overcoming Class Cluelessness in America” by Joan C. Williams.

But the comments of Democrat rank-and-file voters are disturbing for the country.  It seems the one-time post-9/11 bipartisan consensus to fight the “War on Terror” (i.e. War on Radical Islam) is gone.  Liberals went to court to block the administration’s travel restrictions and they cannot bring themselves to face the fact that Islamofascism is a bigger threat to world security than Christians pressing to ban transgender bathrooms in state houses.  Liberals still bemoan the murders of gays at the Orlando disco last year as a “guns problem,” not an Islamofascist problem.  We have no consensus on how to destroy ISIS either.

Republicans also have a problem attracting Muslim voters, which does not bode well for us in the upcoming Virginia state elections or in other states.  A new Pew Research poll  finds 59% of Muslim Americans believe the Republican Party is hostile toward their religion.

However, national security should trump politics.  We can’t let up on fighting Islamic terrorism in order to get Muslims to vote for us.

The No. 1 threat in the world today (other than North Korea and Iran having nukes) is Islamic terrorism, not Christians, Jews, Sikhs, Hindus, Buddhists, or even atheists lobbying politicians.

When Democrats can’t understand who the real “enemy” is, it’s a serious problem for all of us.