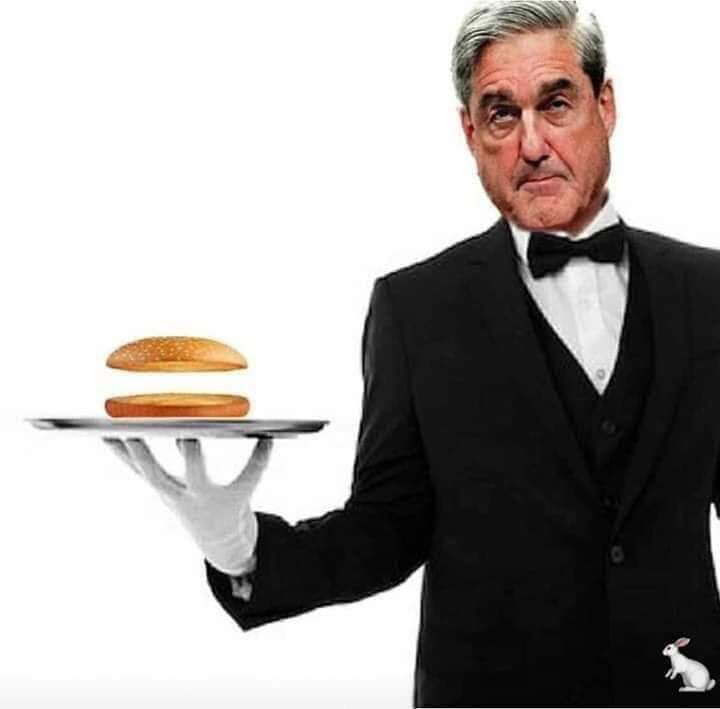 Robert Mueller and his big nothing burger

Are you happy, Democrats?

For 675 days this country has been treated to a political circus, the character assassination of a sitting President, courtesy of the Democrat Party and its advertising department, the “mainstream” media.  Well, after lionizing and nearly sanctifying Robert Mueller, he has delivered the proverbial “nothing burger” first divined in 2017 by that Democrat stalwart, Van Jones.  Are you happy, Democrats?

Mr. Mueller and his 19 lawyers with help from 40 FBI agents issued 2800 subpoenas, asked questions of 500 witnesses, and found…..NOTHING!  All this after being given a mandate not to investigate any specific crime but to investigate until he found something. This has cost We the People over $25 million and counting. Are you happy, Democrats?

The country has been made a laughing stock for the way one political party so hated the leader of the other party that it would say anything, anywhere, anytime a camera was near.  The Russians loved it! You have distracted a man entrusted with keeping America safe in a dangerous world, who is trying to negotiate nuclear disarmament of a lunatic in North Korea. You have turned neighbors against neighbors. You have ruined the reputations of CNN, CBS, ABC, NBC, MSNBC, NPR, the Washington Post, the NY Times, and so many other local TV, radio, and print “news” organizations.  Evening newscasts’ coverage of President Trump has been over 90% negative since the investigation began. The NY Times alone ran nearly 500 separate stories (tall tales is more like it) on non-existent Russian collusion. In addition, ABC, CBS and NBC evening newscasts aired a combined 2,284 minutes of “collusion” coverage, most of it after Saint Robert Mueller was appointed Special Counsel on May 17, 2017.  They are now the fake news media. Are you happy, Democrats?

You started a witch hunt, alright, but kept failing to mention that the ridiculous dossier composed by who knows who in Russia, presented to former (thank God) British spy, Christopher Steele, and peddled by Sen. John McCain was, in essence, an opposition research paper paid for by your Party! Simple oversight, I’m sure. And what about those emails that your candidate, Hillary Clinton, wiped from her computer with a cloth or something? You were happy with former FBI Director Jim Comey’s statement that since Hillary didn’t intend to break the law, the FBI would not investigate, even though Comey said the Russians probably did gain access to classified materials. Nothing to see there, either. And were you happy with those 2 middle of the night SWAT team raids on the homes of Paul Manafort and Roger Stone?  What about the phone taps on Trump Tower? I know, I know, nothing to see here, move along.

But, it hasn’t been a total loss.  Michael Cohen has been exposed as the lying, subversive, incompetent lawyer and traitor…a rat, in street talk…that he is.  Paul Manafort will be spending almost 7 years in jail for tax evasion, George Papadopoulos spent 14 days in jail for false statements about something or other, and Gen. Michael Flynn has pleaded guilty to false statements before President Trump took office.  Not a bad haul for $25 million (so far), hmmm? Are you happy?

As a side note, that other Michael, Michael Avenatti, had his 15 minutes of fame trying to blackmail President Trump on specious charges of having an affair with a pornographic actress.  In a testament to Avenatti’s character, he was indicted just this past Monday for trying to extort $20 million from sporting goods manufacturer Nike. I would ask whether you were ashamed of attaching yourselves breathlessly to him but I’m sure you are missing the embarrassment gene in your DNA.

This whole spectacle has done two other things: cemented Donald Trump’s reputation for honesty and united his voter base like no other President has seen.  That makes US happy. Now, let the man get on with Making America Great Again and why don’t you start a GoFundMe account to provide psychiatric services to Crazy Maxine Waters, Adam “pencil neck” Schiff, Nancy Pelosi, Chucky Schumer, the entire CNN staff, and all the NY Times editors/reporters. See you in November 2020 after President Trump gets reelected in another landslide.  I can’t wait.