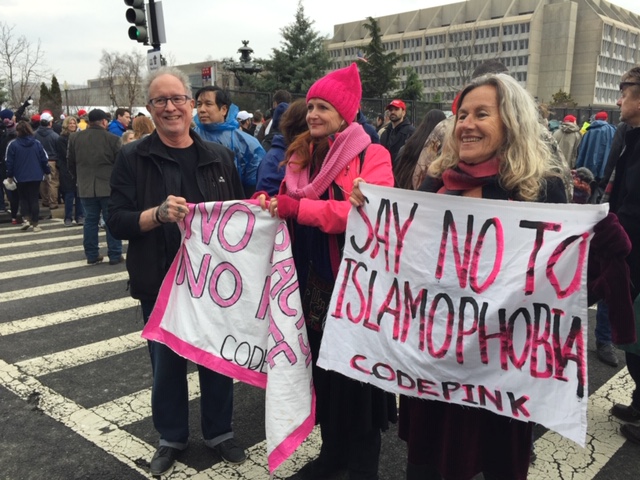 Bill Ayres and Bernardine Dohrn on Inauguration Day 2017, in the middle of Independence Avenue

We’re five days away from Election Day on November 6.  Are you feeling nervous? Unsettled? Tumult is in the air.

Suspicious packages are delivered to homes of prominent politicians, while Members of Congress are harassed in public places and outside their homes.  Thousands of migrants are being transported somehow from Central America and heading for our southern border. Only a few weeks ago, screaming mobs pounded on the bronze doors of the Supreme Court in defiance of a new Justice.

Where is this turmoil coming from?  Our country has experienced upheaval in its past, but this time something feels different.  Or maybe, it’s a replay of the 1960’s when the Weather Underground planted bombs (which actually detonated), anti-war protesters wore masks while rioting in the streets, and a whiff of anarchy hung in the air.

Masked protesters are back in vogue.  We’ve seen them at Antifa-inspired events, Black Lives Matter rallies, on college campuses when the mere presence of conservative speakers sets off rioting and the smashing of windows.  Women’s marches suddenly spring up in orchestrated fashion around the country, seething with rage and uniting around corporeal pink hats. Free speech is condemned and suppressed on the pretext of “hate speech” simply because someone or some group says they are offended.  Intolerance is on the rise from the very people who demand tolerance.

Like the proverbial frog in a pot of warm water, has the heat slowly been turned up around us to the boiling point without our realizing it?  To paraphrase popular slang, are you ‘Woke’ to what’s happening?

It wasn’t long ago when President Obama told Americans to get in each other’s faces and argue with family members around the Thanksgiving dinner table about health care.  While a candidate in 2008, he admonished a campaign audience about their enemies, “If they bring a knife to the fight, we bring a gun.”

In January 2017, the Resist movement was birthed with pre-Inaugural demonstrations and disruptions.  On Inauguration Day itself, I walked past Bill Ayres and Bernardine Dohrn, standing in the middle of Independence Avenue with resistance signage.  Ayres and Dohrn were members of the 1960’s Weather Underground. They also gave then-IL Senate candidate Barack Obama his political start at their home in Chicago.

Fast forward to a few weeks ago when former Attorney General Eric Holder spoke at a political event and declared about political opponents, “When they go low, we kick ‘em.  That’s what this new Democratic Party is about.”

Two days later, Hillary Clinton made this ominous statement during an interview:  “If we are fortunate enough to win back the House and/or the Senate, that’s when civility can start again.”

Before you head to the voting booth next Tuesday, take some time to reflect upon the political Left.  It takes many forms, wears different faces, but a common thread of violence runs through it. Violence takes hold when political persuasion does not.  Political persuasion depends upon civil society. We cannot have a civil society when we allow forces in our midst to tear us apart by violent means.

When candidates tell you to get in people’s faces, fight in the streets, and go harass your opponents when they’re dining in restaurants, shopping at malls or going to the movies, they’re turning up the heat. Be the frog that jumps out of the pot before it’s too late. Get ‘Woke.’

Are You ‘Woke’? was last modified: November 2nd, 2018 by Guest Contributor Catharine Trauernicht