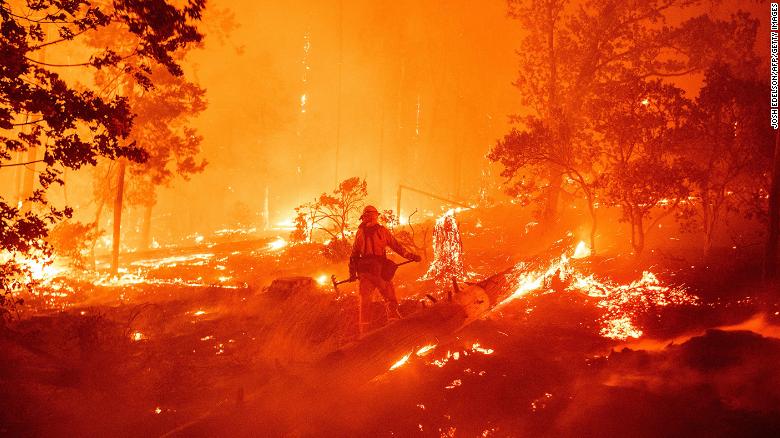 For months now, riots by ANTIFA, BLM and other domestic terrorist have ravaged cities in the West and throughout the nation.  The most notable of these riots has occurred in Portland, Oregon where rioting, including arson, is a nightly event.  Molotov cocktails, industrial fireworks, and gasoline incendiaries are constantly used against government authorities and law enforcement.  Unfortunately, it appears that the arson violence in Portland’s democrat afflicted city is now spreading to their sparsely populated towns and rural areas.

It should be noted that arson is part of the international terrorist playbook to damage America.  Al Qaeda and ISIS specifically mention that setting fires is an appropriate way to attack their enemies.  Leading members of ANTIFA and BLM have traveled to mid-east training camps to learn violent and disruptive strategies and tactics – including arson.

There is no question that manmade fires are being set in Oregon.  A number of the arsonists have been caught.  Most appear to be relatively young men or women with a prior criminal record or brush with the law.  Most of the fires have been set close to roads and not in remote locations where escape is difficult.   Strangely, none of the West Coast arson attacks have crossed the border into Canada.  (Many democrat officials have said that climate change is to blame – but the fires are not from lightning strikes or other natural phenomena.)

The FBI and other law enforcement authorities have been quick to disconnect these remote arson events from ANTIFA or BLM activities.  They say there is no evidence to support a connection, and that folks are floating unsubstantiated conspiracy theories.  However, the fact that the FBI can’t find a direct connection doesn’t mean there isn’t a connection.

There are a few of possibilities here.  First, the success of the Portland rioters in setting fires has encouraged unaffiliated malcontents to set fires.  Essentially, the malcontents are independent “crazies” using the ideas of ANTIFA and BLM to terrorize the general Oregon population.  Second, ANTIFA and BLM riots have spread beyond the cities and into residential neighborhoods.  Individual ANTIFA and BLM members could be acting on their own without specific organization sanction.  (ANTIFA and BLM are loosely managed and freelance terrorism is encourage.)  Third, the FBI and other law enforcement authorities don’t yet have enough information to make the domestic terrorist connections.  Or, if there is ENOUGH information, the FBI and law enforcement are withholding it until they round up the bad actors.

Arson and wildfires in the West have destroyed millions of acres of land and forest as well as thousands of homes.  These fires have killed approximately 50 people.  As a result of the growing number of arson attacks, groups of armed citizens are now patrolling their towns and rural roads.  They are “arresting” anyone who appears to be in the process of setting fires.

What is obvious now is that the failures of democrat mayors and governors to stop the riots when they began has metastasized throughout their states.  Individual cancers stopped in their early stages are generally curable.  Apparently, that lesson has not been learned or applied to a growing and violent cancer of violence spreading throughout the nation.