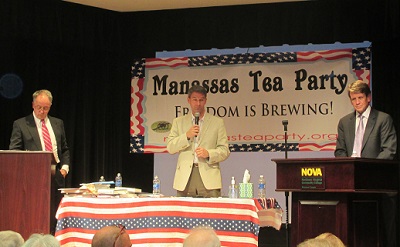 Last Thursday, â€œThe Article V Great Debateâ€ brought a standing room only crowd to hear Dr. Michael Farris, FOR and Delegate Robert Marshall, AGAINST a potential Convention of the States. Special thanks go to these two for espousing their beliefs and the Manassas Tea Party for hosting the debate. [read_more]

Article V of the U.S. Constitution allows two methods to propose amendments. The only method that has been successful 27 times is when Congress proposes the amendment and the states ratify it. The other method to amend the Constitution comes when the States call for a convention to propose an amendment. Then the States would ratify it (or not). This second action would essentially by-pass the Congress. They would have only administrative functions, but no voting authority.

Here’s a summary of the pros and cons of the Article V Debate. Mike Farris believes that the Government is out of control. The only way to fix it is to create structural changes to the Constitution — like term limits for Congress and Judges. He argued that certain contextual text needs clarification, like the Commerce and General Welfare clauses.

For those who want to heard the case against an Article V Convention, Convention of States or what ever they call it now.

Although more people are beginning to understand the seriousness of the problem, there is still too much disarray, too little consensus about solutions.
The convention method would be much faster and more efficient, but it is important to organize well first or it might get derailed as noted.
We should build a more dependable and broader base of support for well thought out changes, then proceed with any convention.

Yes…without a defined conservative consensus going into something like this, the outcome would almost certainly be a disaster.

I would agree with Delegate Marshall on this one. Can you imagine what we might get with a liberal hijacking of such a process?? Pro-gay, pro- choice, gun control, even more watered down border control. It would be a disaster.

Also…Is it me, or does it look like Cuccinelli’s fly is down in that picture?

I took the picture and his fly is not open. I’m with Delegate Marshall too, at least for now there are simply too many unknowns about what might happen at a Constitutional Convention.

A non-working lapel mic is setting on the table in front of him. The foam cover on the mic is what you are seeing.

We attended the debate and I agree with Shak’s comments. We need leaders right now who will abide by the Constitution and use it to save our nation.