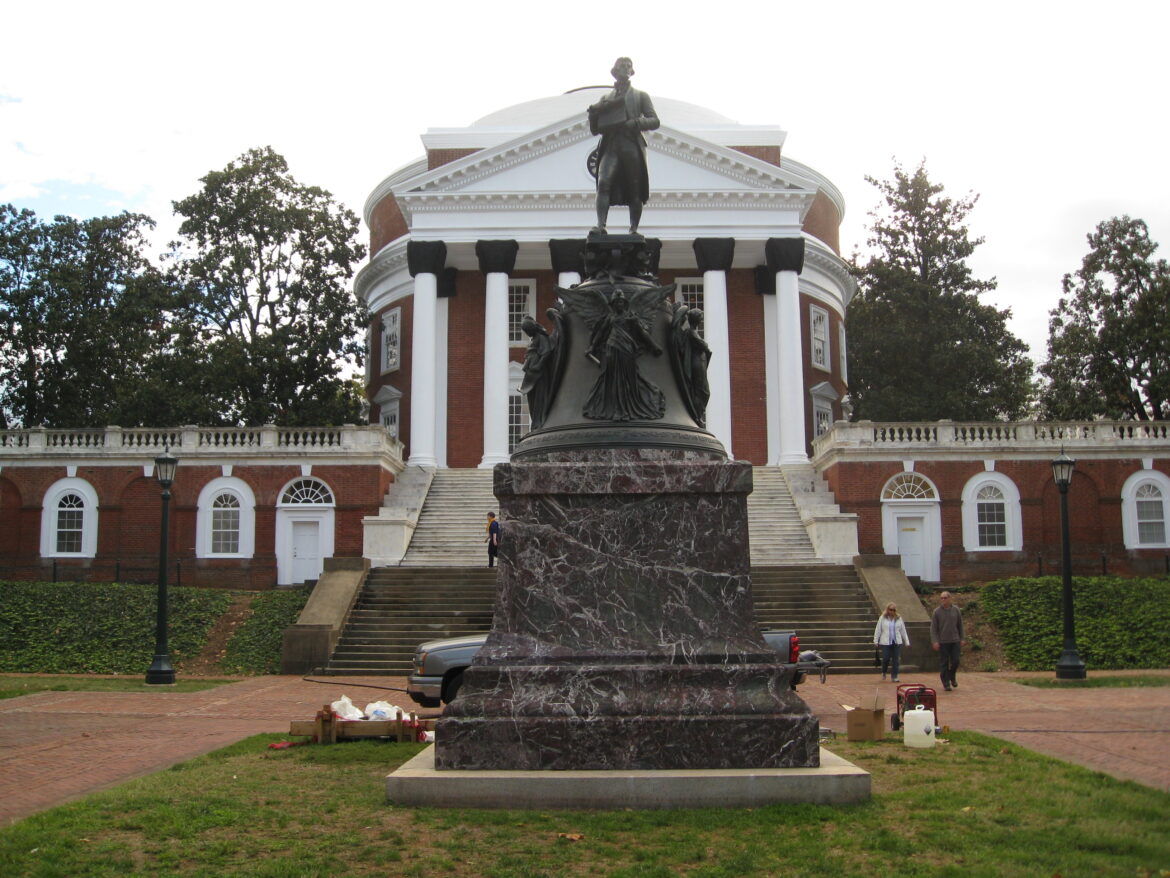 Here is what passes for logic at The Cavalier Daily, the student newspaper of the University of Virginia, a university once reputed for the excellence of its education:

We reject how the University’s physical environment — one that glorifies racists, slaveholders and eugenicists with statues and buildings named in their honor — upholds an enduring culture of white supremacy. There is a reason why Charlottesville’s local Klu Klux Klan Chapter hosted its inauguration ceremony at Jefferson’s Monticello tomb. There is a reason why white supremacists gathered with torches around Jefferson’s statue on the north side of the Rotunda. There is a reason why they felt comfortable marching through Grounds. Our physical environment — from statues to building names to Jefferson’s overwhelming presence — exalts people who held the same beliefs as the repugnant white supremacists in attendance at the “Unite the Right” rally. These buildings must be renamed and memorials removed.

The CD editorial writers use the rhetorical device of guilt by association to tar Jefferson. Notably, this particular circumlocution holds Jefferson guilty by virtue of association with the Ku Klux Klan, which did not exist in Jefferson’s time, for activities undertaken some 200 years after he lived! The mystic chords of White supremacy, it seems, transcend space, time and causality.

Ordinarily, such incoherent thinking in a college publication would not warrant commentary in a blog about Virginia public policy. But the irrational animus against Jefferson exhibited by the CD editorialists is by no means limited to the student newspaper. Hatred of Jefferson is widespread in the university he founded, and the Ryan administration has permitted the virus to spread uncontested.

This intense loathing first came to the attention of UVa alumni a couple of years ago when a resident of the Lawn posted her infamous “F— UVA” sign on her door and subsequently referred to Jefferson as a “slave-holding rapist.” As shocking as alumni found that sentiment, we were dismayed to find that it was not an outlier. A significant body of thought at UVa, we discovered, postulated that the sin of being a slaveholder was so egregious as to obliterate all other considerations.

This view became institutionalized by the Commission on the History of Slavery and the University, which began as a commendable effort to broaden and enrich the university’s history by exploring the role of African Americans, but quickly hardened into a leftist orthodoxy that drew a straight line from the institution of slavery, Thomas Jefferson, Jim Crow-era segregation, eugenics, and massive resistance to modern-day White supremacy, omitting much along the way. The UVa-as-a-white-supremacist-institution then propagated through various courses, seminars and other channels such as the university student guides who give tours of the Lawn and Rotunda as adjuncts of the Admissions Department.

The Commission was launched during the tenure of former President Teresa Sullivan, it would not be fair to lay the entire blame for the current state of affairs upon the administration of President Jim Ryan. However, it can be said that Ryan and his entourage have been remarkably detached in the face of the upwelling of anti-Jeffersonian rhetoric and uncooperative with those who would defend the university’s founding.

One is tempted to conclude one of two things. Either President Ryan is largely in accord with the anti-Jefferson radicals and seeks for pragmatic reasons to hide his sympathies — perhaps to avoid offending alumni and donors — or he is simply unwilling to bring down the wrath of powerful internal constituencies by uttering a full-throated defense of the university’s founder.

As a member of The Jefferson Council, an alumni association organized to uphold the Jefferson legacy, I find myself increasingly leaning toward the former view: that Ryan and his coterie harbor negative views of Jefferson but do not state their beliefs openly for fear of alienating alumni and compromising the flow of donations.

Two recent incidents reinforce my conviction that this is so. First, the Jefferson Council sought to place an ad in Virginia, the UVa alumni magazine, reminding readers of Jefferson’s great accomplishments as well as his record of opposition to the slave trade, the geographic expansion of slavery, and, despite his status as a slaver-holder, to the institution itself. The ad also alluded briefly to the fact that Jefferson’s paternity of his slave Sally Hemings’ children was contested by reputable scholars. The alumni association turned down the ad. When we tried to appeal to the Board of Managers, we were obstructed at every turn and denied a hearing.

Now, the alumni association is independent from the university on paper (even though it works hand-in-glove with the Ryan administration on numerous matters). But Virginia Sports Properties is not independent. When the Jefferson Council tried to run a full-page ad in the fall football guide, our request was turned down flat… without explanation, and without even an answer to the question of who, up the chain of command from the ad salesman, made the decision.

Whatever the thinking of President Ryan, the practical effect of his administration is to give free reign to scholars and students eager to trash Jefferson’s historical reputation and erase his memory while blocking any effort by the Jefferson Council to defend him. Thus, the original offense of failing to respond to the calumnies against Jefferson has been compounded by another: the silencing of those who would contest the emerging orthodoxy.

UVa today would be unrecognizable to Thomas Jefferson, the champion of free speech and open inquiry. Apparently, that’s just fine to the people in power.

“When the tailgate drops, the bullshit stops.”

Anyone who knows a coon hunter understands the meaning of this quote. For those not familiar with it: Growing up in south Mississippi, I spent a lot of time with my Granddaddy and uncles (my father died on Iwo Jima), I did a bit of coon hunting. To this day, even at my advanced age, I return to the Delta and occasionally go coon hunting with my redneck Mississippi cousins. So — what does this mean? Coon hunters love to talk about their dogs and the dogs’ abilities to find and tree coons. Much of the talk is friendly bullshit. But when you take to the woods, drop the tailgate on the truck releasing the dogs, the bullshit stops.

By the same token, within the past 24 hours, tailgates have dropped and the Trumphumper bullshit is about to stop.

FIRST: Biden’s inflation reduction and jobs plans are working — US and foreign manufacturers have announced plans to build billions of dollars of plants in the US, bringing thousands of jobs home.
https://heathercoxrichardson.substack.com/p/august-30-2022

On the legal front, DOJ has released photos of many of the highly-classified documents removed from Trump’s illegal possession. Meanwhile, the 40-page DOJ response to Trump’s demand for a special master shuts the door on Trump, his fourth-rate lawyers, and his lifetime of lies.
https://www.rawstory.com/trump-top-secret-documents/

And for those promising “violence in the streets” when the Godfather in indicted: Don’t even think about it.

Biden is good at creating misery – that is what socialists do. And, if you bothered to watch his speech, he promised misery for all Americans who disagree with him. As far as violence in the street, I expect your ANTIFA thugs to ramp things up shortly as Biden issued the call to violence.

Rep. Cartwright: Was there a header on the three documents that we’ve discussed today that had the little “c” in the text someplace?

Director Comey: No, there were three e-mails. The “c” was in the body in the text, but there was no header on the email or in the text.

Director Comey: That would be a reasonable inference.

In addition, the State Department spokesperson made clear yesterday that these emails, which discussed call information for the Secretary, included these “c”s by mistake, and the information was not in fact classified

Well… I guess at this point what does it matter? Is Jefferson really relevant to this polyglot boarding house with no border, and a party Team Blue that uses identity politics and black grievance to win elections? A shallow tiktok culture… weirder than hell.. is Jefferson relevant to it? And the millions of Central Americans who stream across the border… what does old white Tom have to do to their reality… Like tearing down the statues on Monument Ave… I will bet you Mr Bacon cheered that on…you are pretty Bearing Drifter… Well now they came for Tom… George Washington and even Lincoln…
Like the flag article written by Dr Warren… at this point what does it matter if they tear out Jefferson and memory hole him? You have a government that is crapping on any idea that Jefferson advanced and Team Piglosi and Team Turtle cheer on that state.. got to Keep us safe from Trump!!! Or Russians…

That is not true. While it is possible, it is also possible that any of a substantial number of Jefferson’s relatives at the time could have fathered the child. The problem with your statement is that it is intended to further an ideology rather than further facts.

Did not Mr. Jefferson end the slave trade involving the Barbary pirates and ended the importation of slavery during his second term as President of these United States?
Virginia’s Mr. Jefferson has always been a threat to authoritarians. He is one the greatest beacons liberty. I am grateful that he has touched all of our lives.
“for I have sworn upon the altar of god eternal hostility against every form of tyranny over the mind of man.” – Thomas Jefferson to Benjamin Rush, September 23, 1800

If you are going to attack white people for slavery, then you should attack the source of slaves – namely African tribes that preyed on other African tribes. You might also want to condemn the African Muslim run clearing houses that sold millions of all races into slavery. Then again, you might want to condemn the black man who got the courts to declare that his black slave was enslaved for life – happened in a Northeast state. Or you could condemn the nearly 5000 free blacks who held slaves. You might condemn indenture which often became lifetime slavery for whites.

How convenient to pick who you want to condemn when you perpetuate the racism that led to slavery for thousands of years.

Helen Dragas, a “reasonable democrat”, to her credit saw the downward trend that hard left leadership was taking UVA and attempted to do what was in the best interests of the institution and decouple political ideology from the Jeffersonian ideals of a UVA education. Ryan is merely Sullivans force multiplier but this trend away from Jefferson is the will of the board. https://www.youtube.com/watch?v=Sh6VsLByAXE