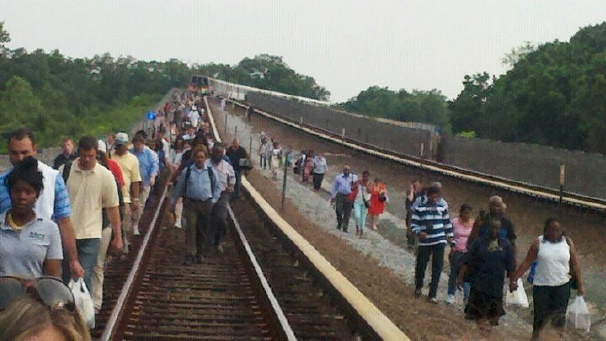 The Washington Metro’s largest union has sent letters to political leaders in Virginia, Maryland, and Washington, D.C. outlining the contract issues behind the union’s veiled threats to conduct an illegal strike. The demands, according to the Washington Post:

“Our demand is simple: get [General Manager Paul] Wiedefeld to follow the law, abide by the collective bargaining agreement, and bargain in good faith on all matters under his obligation,” the union wrote in its letter.

Seventy-two hour notification for sick leave? That sounds strange. I don’t usually know 72 hours ahead of time that I’m going to be sick, and I don’t expect most union members do either. Otherwise, management seems to be making entirely reasonable demands. The number one priority of the union, of course, is to preserve union jobs and maintain union dues revenue — priorities to which, as a taxpayer and occasional passenger, I am utterly indifferent. But the particulars of the contract are not the issue — the prospect of a strike is what should concern us all.

As Metro management and the union play chicken, Del. Tim Hugo, R-Centreville, has urged in a television interview that Governor Ralph Northam and Attorney General Mark Herring to prepare for a possible strike and the transportation anarchy that will inevitably follow in Northern Virginia:

We’ve called on the Governor to make sure he says something, make sure he jumps into this fight. They should move to challenge it in federal court to uphold the compact, the Governor and the Attorney General, because we have to protect the thousands, literally tens of thousands of people in Northern Virginia who rely on Metro to get to get to work everyday.

The instant a strike is called, the guv and AG need to be ready to file suits, seek injunctions and pursue other remedies to keep the trains and buses rolling. Moreover, they need to let the union know they are ready and willing to act forcefully. Politically speaking, the stakes are much bigger than looking out for the tens of thousands of Virginia Metro riders. Turn those passengers loose on the roads and highways of Northern Virginia, and the entire transportation grid will freeze up. Everyone will be affected. An illegal strike must be shut down as quickly as possible.

I used to be concerned about Unions until I witnessed Virginia Republicans for the past 12 to 15 years allow a sunami of illegal aliens flood the Virginia Construction Industry.
I have even witnessed Va Republicans bring forth legislation that protects the illegal labor and vote against legislation that would end illegal labor.
Illegal labor is not only exploitation but contributes to low wage growth across the board that is eventually subsidized by the taxpayer.
Union Labor produced enough money for Delta Star and Republican Senator Newman to contribute to Senator Vogel (who voted for Med Expansion).

Metro does not effect me except for tax dollars it takes so privatize the NOVA’s ride to work or drive yourself, a personal responsibility thing.
Until Va. Republicans and those here at TBE desire to combat fraudulent and santuary employment I will stand aside and let all Unions screw you any chance they get. Turnabout is fair play.
Yes,
For many here it is oh no the Union yet are complicit to Santurary Employment.
When you wish to discuss Right to Work as a whole then you will have credibility until then Strike Unions Strike!
FYI,
I drive my own self to work in a Truck that made right here in Virginia.

Any Metro employee who strikes should be fired unceremoniously.

Norham, Fairfax, Herring, Warner and Kaine will own this one. And if it turns out bad I would simply remind NOVA who they voted for..