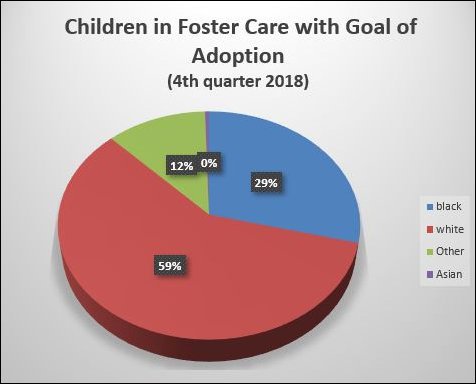 A few days ago I posted data showing that â€œAsiansâ€ in Virginia are a diverse group whose country of origin include India, Pakistan, China, Vietnam, Korea, the Philippines and many other nations. Some groups are very well-to-do, some middling. But none, regardless of the circumstances of how they arrived here, are poor.

In the past, I have attributed part of the superior educational and income performance of â€œAsiansâ€ to the strong, family-oriented culture of the diverse immigrant groups lumped into that broader racial classification. Recently, while poking around Virginia adoption data, I have uncovered one measure of how Asian family values make life better for children.

While â€œAsiansâ€ constitute more than 5.5% of Virginiaâ€™s population, only 8 of 1,751 children in Virginiaâ€™s foster care system are classified as up for adoption. Thatâ€™s less than one half of a percent â€” or less than one-tenth the rate of the non-Asian population. In the pie chart above, Asian children are visible only as a sliver.

Children enter the foster care system when they have been abused or neglected. While some Asian children of Tiger Moms might complain about the stress of high expectations, they arenâ€™t being beaten, starved, or sexually assaulted, as happens all too often in other ethnicities. â€œAsiansâ€ in Virginia have done a better job raising their children, at least as measured by this metric of social pathology.

What is the reason? Are â€œAsiansâ€ unique? Or have these groups just not resided long enough in the United States to fully absorb our corrosive culture? Will future generations of â€œAsiansâ€ be as dysfunctional as other Americans? Weâ€™ll see.