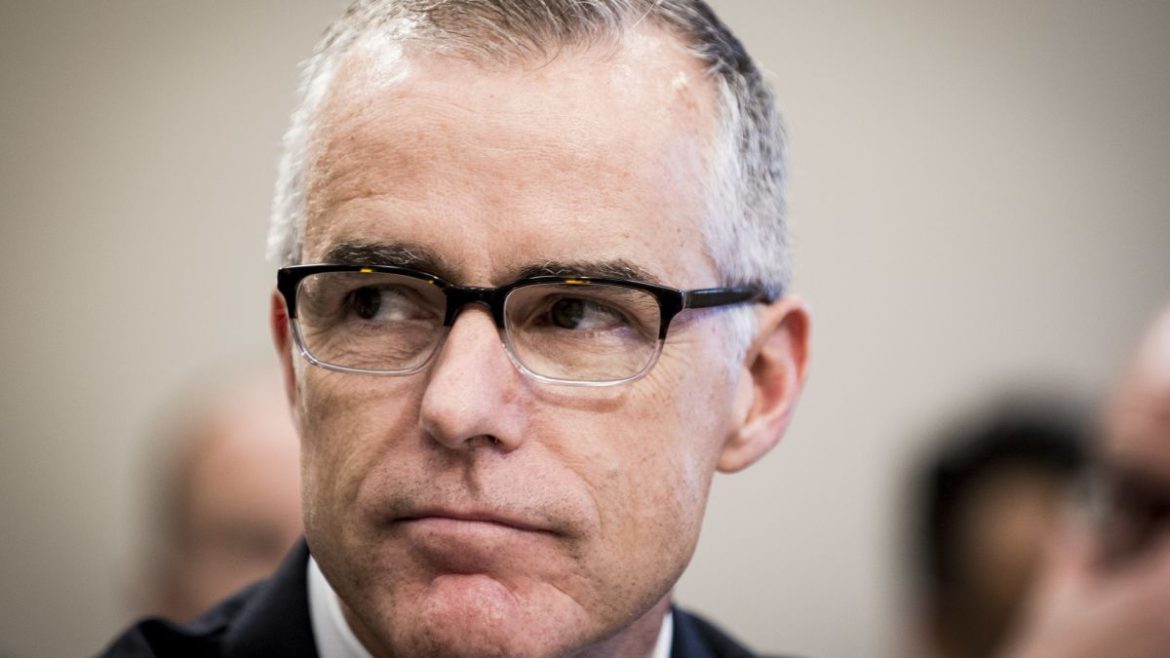 Sessions announced the decision in a statement just before 10 p.m., noting that both the Justice Department Inspector General and the FBI office that handles discipline had found “that Mr. McCabe had made an unauthorized disclosure to the news media and lacked candor — including under oath — on multiple occasions.”

He said based on those findings and the recommendation of the department’s senior career official, “I have terminated the employment of Andrew McCabe effective immediately.”

On Thursday McCabe went to the Justice Department to plead to keep his job until Sunday when he would be eligible for full retirement after 22 years with the FBI. That didn’t happen and his pension is now in jeopardy.

It was very stupid for the Establishments to even fire up this investigation. It blows back too hard on what scum lead the government in the political and bureaucratic ranks. I get it, they wanted to eliminate Trump, cover up for a lot of Democrat party issues, like rigging the primaries for Hildabeast, and attempt to turn the government back unto the swamps control which Trump represented a threat to their way of life. But they open up too much of the rottenness of their nasty home.

By the way McCabe lists himself as a Republican… did y’all good ol Establishment Republicans know that? You guys are as useless as Democrats.

What took so long? Finally, Mr. Sessions worked up the courage to do something that should have been done at least a year ago. Rosenstein next?

If AG Sessions had been proactive and appointed an independent investigator to pursue the Hillary/FBI investigations as well as the FISA warrant and Steele/FBI involvements as many expected (Sessions has known what was in the IG report for some time without a doubt) this would be the guy to leverage. He was directly or indirectly involved in all those actions in some form as Deputy Director (remember he left the agency a month ago on leave until retirement when he realized what was coming). But Sessions dithered and how that is going to be far more difficult to achieve.

You missed what Sessions said at the end of February: ” I have appointed a person outside of Washington, many years in the Department of Justice to look at all the allegations that the House
Judiciary Committee members sent to us; and we’re conducting that
investigation.”

“Well, there you have it. There is already an appointed person, likely a prosecutor, from “outside of Washington”, in place prior to the recent request for a Special Counsel by Goodlatte and Gowdy. That was exactly what an objective analysis of the events previously outlined – and we previously noted.
Attorney Jeff Sessions is noting the existence of an outside prosecutor who has been in place for quite a while, exactly as we thought.”

I was actually aware of his claims but find it still odd that this individual remains as far as I understand unknown and/or anonymous. Perhaps I may have just missed it but I have never seen a name attached to this claimed appointment. I find it difficult to believe you could carry out much of an investigation in stealth mode minus any issued subpoenas which the left would have splashed all over the media in outrage if they existed. I still have my doubts.

7 sealed indictments in last two weeks in Mueller’s venue. The cake is baked. Nothing Trump can do about it now.

Your failing as a spin troll friend as even the Dems have given up on the free range Mueller investigation to produce any Trump impeachment damaging evidence. You are on the Storm Daniels decade old sex scandal now. Try to keep UP! Don’t you guys have weekly meetings to ensure you are all on the same DNC (we are going to get him) talking point. We expect a higher level of commitment from our trolls here at the BE! Get it together!

Don’t doubt me. The cake is baked.

Stormy is just the icing on the cake. Should you right wingers ever try to claim the family values party title again in future runs. You have been shown to be nothing of the sort.

You really need to go back to troll class ASAP but let me try to help you out. Most hard core right wingers actually reject Trump (they are your fellow travelers which seems to have flown over your head) it’s the working and middle class voters (many actual Dems sick and tired of the left’s idiot rants) that are his growing base. I realize facts to trolls are like sunlight but trust me they actually work better than just spouting easily substantiated ignorance or left wing what if web articles. But I guess if that is all you have, that is all you have, but here is an update it’s not working fo you.

If trump’s base keeps growing at its current rate the dems will win every single house seat in the 2018 election. He’s not exactly helping the Republicans any.

I have no idea what you are talking about but that is OK because it’s pretty clear neither do you. Check back post midterms and look at this idiotic comment again and see how it holds up. Meanwhile you and Eric the troll can commensurate in the months ahead though he may in fact be a little more grounded than you.

It’s odd that you pay no attention to politics, yet comment on a political blog. Republicans are experiencing beat downs in every election they face, check back after the mid terms if you don’t see that you clearly are lost.

I’ll be here for every single second through the mid-terms. T’will be great to watch the implosion!!

Just block this annoying A hole, his partner, Arthur Olson and That Chris K.

Yeah, right wingers don’t like Trump. That is truly funny. Of course, I am not surprised the rats are fleeing the Trump ship. He is clearly floundering. Heard he had to get “whisked away” to Mar-a-lago today – needed some golf time, I guess. ?

Didn’t one of your very own Ne’er Trumpers write an article bout how Russia is stealing our democracy.. How does Staton feel about taking away McCabe’s pension? Wasn’t McCabe a warrior in the fight against Russia?

Too bad Hillary didn’t win the election because we’d be safe from Russia!

Hopefully many more firings (and ideally prosecutions) of swamp creatures to follow.

The use of the ABC agencies to attack Trump is truly chilling and dangerous… but not to the two dipshts who post here with Democrat talking points.

It won’t matter if they take away McCabe’s pension… he’ll be working for some firm connected to the Dems in no time, making more money than that pension would ever get him. Do you morons know that his wife got funded by the Clinton machine when she ran for office in VA via Terry Scumbag MacCullife?

One of you TBE columnists should look into what he does next.

You all do realize that your guy is going down (and I don’t mean that in the Stormy Daniels way) – he certainly gets it.

Very mealymouth statement on firing. Nothing about corruption. The pressure to fire forced McCabe out but there is no strength of conviction – just more deep state bureaucratic linguistic twists with hems and haws. Doesn’t anyone in a government other than Trump have courage? Apparently not. Gad!!!!!!

Real life is not always so cut and dried as blogs, social media, movies, and TV. In the old days, fear of public shame reinforced behavior with personal honor and quiet resignations. The swamp has no shame. We don’t need to witness the dimensions of the iceberg to know the Titanic is going down.

I’m sure the treasonous McCabe has an army of lawyers ready to go. he’ll end up getting his pension, but I hope his legal fees dig deeply into that…he needs to experience more of what Flynn has experienced.

Civil suit on the way.

He’ll be defending himself criminally for quite awhile. The FBI internal investigation already concluded McCabe committed the same crime that Flynn was forced to plead guilty to, i.,e., lying to the FBI.

There’s more than that. His loyalties and a “non-political FBI employee” had him involved in more than just lies.

Bring it. Bring it all into the open, teach we electorates the nuances of well-connectedness.

He’ll be working for some sort of firm connect to the Democrats in no time. Yes he will file suit for a show trial for the Democraps to harp upon, UNLESS of course the candy ass GOP is willing to go to the mat to expose McCabe’s actions. The Democrats might throw his butt under the bus if it could hurt them… But i doubt it. The GOP is generally a clown car operation.

It’s only a clown car operation because we let them into the car — more non-clowns will lead to an overall clown reduction (except those facilitated by open-party processes).

One of those clowns facilitated by the open party primary is Lindsay Graham unfortunately. This swamp creature wrecks of the gunk of DC badly and is in key positions having to carry the investigations. He surprised me with a couple of things, but he is going to protect the Swamp.

The 10th is a very ‘clown-rich’ environment.

Oh I hope so. Any lawsuit will mean Discovery. Gosh and Golly, how much more will we learn about his crimes and that of his compatriots?
Please oh please sue!

Should not have taken so long

“Dalton: I want you to be nice until it’s time to not be nice.”

Can honestly say I’m surprised McCabe was actually fired. I had no idea Sessions had the stones to do it.