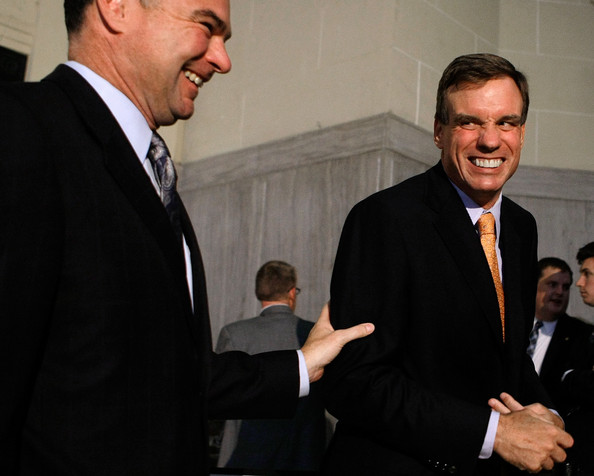 Senators Kaine and Warner laughing at their constituents

A few years ago in my Right From The Start column, I opined that Virginians have no representation in the US Senate. The long and short of it was that Senators Warner and Kaine vote overwhelmingly with Senator Schumer and against the interests of the citizens of Virginia and the country as a whole.

I can support that in nearly every issue, but today let’s look at the President’s handling of US/China trade relations. President Trump is the only world leader who is holding China to account on trade, military expansion, currency manipulation, intellectual property rights, the environment, and global responsibility.

Warner said, “..my fear is that this president is so anxious to claim a victory that he may sacrifice the long-term interests of our country to claim a short term political victory,”

Senator Kaine said additional sanctions would only “magnify the pain” for Americans, especially farmers, whose livelihoods depend on the products that have been targeted by Chinese retaliation.

“Who’s the trade war on? Is it on our own people, or is it on China?” Kaine said, adding that presidents shouldn’t have the authority to raise tariffs without a vote in Congress.

According to the Virginia Department of Agriculture and Consumer Services, China is Virginia’s number one agricultural export market for soybeans. In 2018, Virginia exported more than $58 million soybean products to China.

Virginia’s Senators should be carrying President Trump on their shoulders to China negotiations. But they are not. Why? Because they are charter members of the #Resist movement. Resist, obstruct, and deny this president any successes.

While there may be a hardcore of anti-Trump #resist at all costs faction in the Democratic party, allowing China to inflict harm on American farmers in order to deny Trump a “win” would likely be a politically costly move for Democrats, solidifying Trump’s hold on the farm vote and endangering Virginia Democrat House seats in rural districts. Voting against farm aid would make it harder to blame Trump for the costs to farmers from the trade war.

The United States is in a multidimensional competition with China. While this is unlikely to involve military conflict, although there is a military dimension to it; the primary competition is technological, economic, political, diplomatic, and ideological.

The Trump campaign believes that China can be a winning issue in the 2020 campaign. They are already leaping on Joe Biden’s off-the-cuff remark that China “isn’t in competition with us.”

But Democratic political strategists rarely talk about foreign policy, seeing it as a loser. Democratic foreign-policy experts generally agree that relations with China are becoming more difficult, but they divided about how much emphasis to place on it.

Kaine feigned concern for constituents by deflecting the general success and leadership from the president on trade issues by changing the subject: “We’re trying to reel back in the president’s power to just do this without consulting with Congress. If the president came and consulted with Congress, we would have told him, listen, here’s what our constituents feel about this, here are their worries about this. But there wasn’t that consultation,” Sen. Kaine said.

One thing is certain. There is no end to the number of Virginians our Senators would throw under the bus to appease Chuck Schumer and obstruct President Trump.

Like one Charlottesville protester said: “Democrats need to know that this Resistance is ready and willing to primary any Representative – of either party- who supports Trump’s policies. We are putting all Democrats on notice that incumbency will no longer equate to electoral success.”

Senator Warner and Senator Kaine got the message and are conducting themselves accordingly, party over constituents, every time!

AWOL: Senate Representation for Virginia was last modified: May 18th, 2019 by Frank McDonough