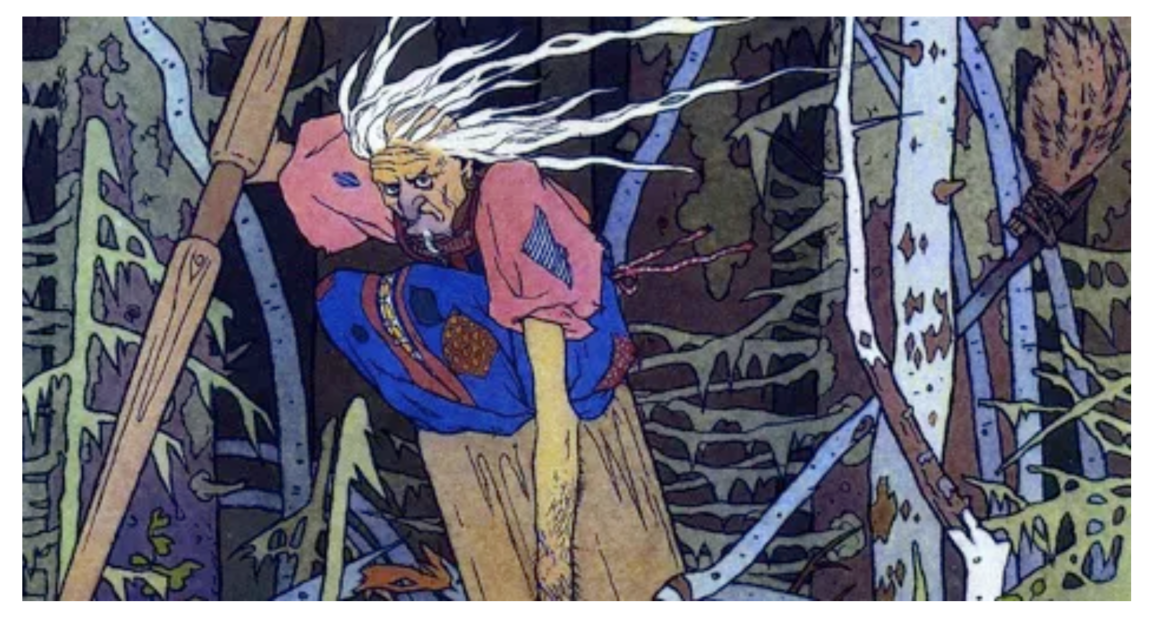 In the movie â€œJohn Wickâ€, the head of the Russian mob in New York City refers to Wick as the Baba Yaga or Bogeyman.Â  (The character John Wick is a legendary assassin with a superhuman tenacity and ability to kill.)Â  Certainly, Vladimir Putin can be looked at as a bogey man, but as a Baba Yaga, he is much more intriguing.

According to Slavic folklore, Baba Yaga is most often portrayed as a deformed and ferocious woman who lives deep in the forest.  She flies around in a mortar and wields a pestle.  She may help or hinder those who she meets.  She is enigmatic and often ambiguous.  So what is Putinâ€™s Baba Yaga like and what are his, not her, motivations.

Putin is driven by a burning desire to restore Russia to its past glory.  His goal is to â€œMake Russia Great Againâ€ and that requires territorial conquest â€“ particularly of those nations which were once under the Soviet Unionâ€™s dominance.  He uses his energy assets, natural oil and coal,  to both placate and dominate his enemies.  The velvet glove of energy and the mailed fist of military might are always in play.  The following quote from Napoleon applies, â€œTo know a nation’s geography is to know its foreign policy.â€

Putin is disgusted by the behavior of the Western nations who are abandoning their unifying cultural heritage.  Putin sees himself as the champion of Christianity and the ideals of Western civilization.  The Western nations, by failing to fight for their heritage, have discarded the stability and freedoms of the civilized Christian West and embraced an uncertain globalist future.

It is obvious that Putin has no respect for the Biden presidency.Â  He sees the current American President and his foreign relations and defense teams as fundamentally weak.Â  Putinâ€™s calculus is that Biden will not go to war to defend Europe or American interests around the world.Â  Not surprisingly, Biden has just admitted as much and stated that he and the NATO allies will employ sanctions.Â  Good luck, Ukraine people, you are on your own.

Putin is angered by the incessant personal attacks from the American government and media.  Rather than being respected as a player on the international scene, he is constantly treated with contempt.  This has taken a toll on his willingness to be geopolitically reasonable.  The following quote from Putin is instructive, â€œMaybe they have nothing else to do in America but to talk about me.â€

One final thought:  Putin is upsetting the great globalist reset by demonstrating that nations and territory matter.  In that regard, he is the Ð‘Ã¡Ð±Ð°-Ð¯Ð³Ã¡.

This war has far more reaching consequences than just to frame it in the various terms you get from idiot media propaganda machine… far more scary for your future millenials…. oh boy. Putin thought this war out better than our stupid government does. He now doubt knew that the Globalist were going to throw financial sanctions at him… and knew what they were…
And Powell said the other day in a remark of astounding stupidity that… the world can have more than one global reserve currency….
This government is one run absolute corrupt idiots… The day that you don’t have the dollar as the reserve currency is the day that the country is completely done. We have trillions in dollars of debt to run this shitshow that was hollowed out of productive industry… and is about as unified as a ten thousand piece jigsaw puzzle…
The kids are about to live in interesting times.. I’m glad Im old and not going to be here for them..

Gasoline went to $4.099 today in King William County today. A friend tells me it is $5.00 in Powhatan. This despite increases in production and no cuts in crude oil coming into the US. Big oil is profiteering like never before from this Ukraine deal. The Ukraines elected a comedian as their president. Now he has failed them. Putin refused to laugh at his jokes. Tanks and bombs trumpet jokes. They did not spend the necessary money on their own national defense, despite sitting on major natural gas reserves. I understand they also have oil reserves.

And now, via the lies and propaganda of the American media, they want me to finance their downfall. Would Ukraine be better of as part of Russia? They seem to be just to corrupt to handle their own affairs successfully.

We do not own Ukraine anything. They are getting their asses kicked, while the American media tells you otherwise. Kicked really badly. And so far, the American media hasnâ€™t been able to stop it. And, they are really pissed because they are so accustomed to having their way.

How long before people begin rooting for Putin? You can bet that big oil will make sure to give Congress their share of the loot regarding increased gasoline prices. All legal of course.

The Ukrainesâ€™s chose to elect an actual, genuine, comedian as their president. They did not spend the money or take the steps to build a sizable air force, build anti-aircraft sites, and much, much, more to stop or make it very difficult to overthrow their county. Elections have consequences. Americans should take note. Itâ€™s what corruption does.

Putin wants to restore Russiaâ€™s former glory, maybe so.
In the meantime his main purpose might be to destroy the international slush fund, that is the Ukraine. Zelensky is the puppet of the globalist elite that is destroying this country, Australia, and the West. No problem for the totalitarian crook Zelensky. Heâ€™ll move to his 35 million dollar mansion in Florida, and draw on the millions he has in his off shore accounts if Ukraine loses. I guess Ukrainian comedians make good money. I wonder who pays him? Not a friggin peep of this on the msm, and, as usual, the frauds at Fox; all in the tank for the Deep State.
Iâ€™m for reintroducing past American and European culture here, and in the West. How about you? Unless, of course, youâ€™re a proponent of Americaâ€™s cultural trajectory.

President Biden is doing an absolutely amazing job. Surely, you all agree.

Thereâ€™s a trillion bcf of gas under Ukraine territory that hasnâ€™t been touched since it was discovered. The areas that Putin took over years ago captured nearly half of the field. A couple days ago putins Crimea attack force blew up a dam the Ukraine built to block the main source of fresh water to Russian Crimea. Their next stop is Odessa to take possession of the remaining tract of Black Sea gas. And then itâ€™s off to Lviv to meet up with components of the stalled â€œ40 mile convoyâ€ and the final tract of gas. So are these type of internet stories true? Will the cities be nothing but an encircled trap? Only time will tell, and Absent nuclear war, the world has nothing but time to spend.

Why donâ€™t you tell us why Ukraine never bothered to harvest all that natural gas and build up a national military defensive force against invasion? I expect that there is far more to the story than in your comment. Why the the Ukraine people elected a comedian president? I do not doubt you comment. But, it opens the door to a lot more questions.

“Putin sees himself as the champion of Christianity”? That’s interesting from a former Stasi head, but I already knew about that curious metamorphosis. Natalie Grant Wraga, who lived on Furnace Mountain Road in northern Loudoun, told me Putin was finding religion. She died in 2002. She was described by journalist John Berlau as the “Grande Dame of Soviet Disinformation,” a well-earned distinction.
We were friends for many years, especially when she could no longer drive. I would take her shopping. She never believed in the “collapse,” to her an overstatement. We had many amusing lunches together where we talked how our press believed anything they were told about the collapse, no matter how questionable. She would not be surprised about Putin’s ambitions to recreate Soviet boundaries.
During our time together she wrote about the Soviets’ greatest disinformation operation: sustainable development that would be used to destroy our energy-dependent economy. They had great influence at the UN. Gorbachev, along with the late Canadian Maurice Strong, preached doom and gloom unless we lived in a “sustainable” world. The operation is now called Agenda 2030/The Great Reset, meant to replace private property (except for the elites) and capitalism in general. “Climate change (nee global warming) is the catalyst for the New World Order.
Sustainability requires that elites decide what resources (e.g., not fossil fuels) are to be used for production and who will receive that output. The latest wrinkle is your social credit score from your vaccine-plus passports will determine what you will be able to “rent” (remember, you will no longer own property). Freedom and privacy will be dead.
Red states are legislating vaccine passports that will become one’s ID (history) with social credit score.

Wokeness is the equivalent of social justice score. Many companies have already implemented it. As far as Putin and Christianity, part of establishing greater Russia is re-establishing the cultural heritage of its people – and Eastern Orthodoxy is a great pillar of Christianity. By the way, the Chinese Communist leader Xi is much more imperialist than Putin.

Correction – The states adopting vaccine passports reportedly are not “red.”

What’s the point of having a standing army if, when we are exposed to the naked aggression of our traditionally most threatening enemy, we sit on our hands? Unlike half a dozen military conflicts we have engaged in over the past 50 years, this is the fight we need to fight right now. We don’t have leaders in the West but, rather, we have bullies that beat down their own countrymen over the past 2 years but hide from a real adversary that needs to be vanquished.

Geopolitical weakness has always invited disaster. When we â€œelectedâ€ Biden, we invited disaster and we are beginning to see the first, and not the last, geopolitical disaster. The worst part of the Biden administration is that it has embraced an anti-American agenda that makes America less able to fight for truth, justice and the American way.

David, are you in Ukraine yetâ€¦?! I thought notâ€¦