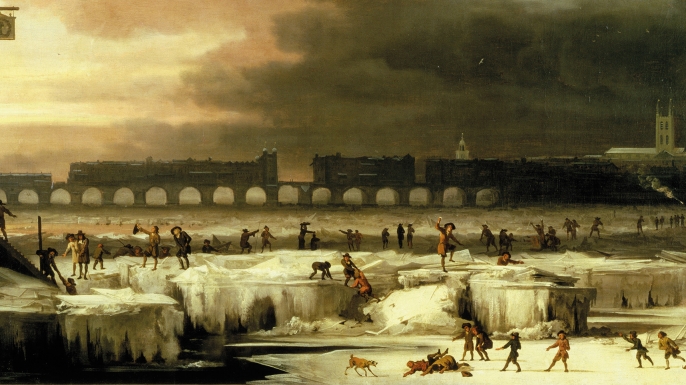 Bacon and a Year without Summer

I’m placing the thickly sliced uncured bacon in the pan and, when it begins to sizzle, the marvelous aroma fills the house. It is a memory from my childhood when Grandma Elena would render bacon fat into lard in her tiny kitchen. It was a preservative for chunks of pork she would seal with wax in glass jars that would feed us for an entire year. It was stored in the cellar, the dank, damp, and constantly cool place. We did not need refrigerators and could not have afforded one anyway.

My dad eventually saved enough money when I was in 12th grade and bought a small refrigerator for our tiny apartment in the city. It was empty most of the time because we did not have food to store, mom shopped daily and we ate what she purchased, no leftovers. We would cool a watermelon in the fridge in summertime or keep a small glass bottle of milk if we were lucky enough to have found the liter bottles sold in the government-run dairy stores.

Like everything else, shelves were bare as soon as the morning delivery was put on sale and the long line of shoppers dissipated with their laden expandable jute string shopping bags.  In winter time we had the window sill for cool storage with plenty of ice and snow.

I could have this bacon now every day if I wanted to but I don’t have to because I believe that I can find it any day in the grocery store and I don’t have to fight others for it like they do in socialist Venezuela.

We trust blindly that our local stores will always have a good stock of food every day. As a realist, however, I know that most grocery stores have enough stock for three days, but who wants to have negative thoughts when this country is so rich and the shelves are a cornucopia of abundance? We have fewer and fewer farmers, less than 3 percent, feeding 330 million. Nobody ever starves in America today but could they in case of terrible inclement weather?

What if we would experience another year like 1816, also known as the Year without a Summer?  Major food shortages occurred across the Northern Hemisphere due to the massive 1815 eruption of Mount Tambora in the Dutch East Indies, preceded by the 1814 eruption of Mayon in the Philippines. (Oppenheimer, Clive, 2003. “Climatic, environmental and human consequences of the largest known historic eruption: Tambora volcano (Indonesia) 1815.” Progress in Physical Geography. 27 (2): 230–259. http://journals.sagepub.com/doi/abs/10.1191/0309133303pp379ra

Volcanic winters are not something new, they have occurred across the millennia but nobody was keeping track then. Evidence of inclement weather disasters and probable food shortages can be found, among others, in studies of soil strata and in ice core samples.

Reports in the U.S. described a persistent “dry fog which turned reddish and dimmed the sunlight – it could not be dispersed by wind or rainfall.”  Scientists termed it a “stratospheric sulfate aerosol veil.” It affected crops, particularly at higher elevations such as Massachusetts, New Hampshire, Vermont, New York, and even the garden state, New Jersey. In early June snow fell in Albany, New York, and in Maine. New Jersey’s crops were damaged by five continuous nights of frost.

Those who push the idea of an anthropogenic global warming conveniently leave out the historical data of the Vostok ice core samples taken by Russian, American, and French scientists. Global warmists have now switched to climate change which all sides agree that it does occur but it is not necessarily man-made. We should not confuse deliberate environmental degradation and lack of conservation of natural resources with CO2 gases emitted by humans and animals existing and breathing. https://www.scientificamerican.com/article/ice-core-data-help-solve/

The Little Ice Age that lasted approximately 500 years is another important occurrence worth mentioning that the global warmists conveniently leave out from their narrative. It caused tremendous agricultural hardship and famine in Europe from around the thirteen hundreds to the eighteen hundreds, affecting the Norse settlers and even Napoleon’s campaign in Russia in 1812 where they encountered such an unusual bitter-cold winter and a lack of food for which they were ill-prepared.  The culprit of the severe cold stretching over centuries was the diminished solar flare activity, a solar minimum, not CO2.

Long winters are not unusual in Russia or in the United States for that matter, it is the inability to have a long enough and warm enough growing season in order to produce sufficient food for its population.

Climatologists who argue when this cooling period actually began, dubbed Little Ice Age by Francois E. Matthes, are more definitive that it ended around 1850-1870. https://www.history.com/news/little-ice-age-big-consequences

In our 20th century communist society, it was not the surprise of weather changes that we had to worry so much about but the unwise economic and agricultural central planning that bore no resemblance to reality or to the ability of humans to produce what was ordered and the fact that most food was used for export in order to buy industrial equipment needed for development. People starved, foreigners ate well, and the communist party had its factories that produced goods that nobody wanted to buy because they were so poorly made.

But we had bacon thanks to my grandparents who always raised a pig for Christmas slaughter, a beautiful animal that kept four-five families alive through winter, spring, summer, and fall until the next year.  If it was not for grandma raising this pig, raising chickens and ducks for eggs, keeping a cow for milk, and planting a garden, several families would have starved because there was not enough food provided by the government in groceries stores for the size of the population. Communists do not recognize the law of supply and demand and are not particularly adept at planning centralized economies based loosely on Marxist ideology.

The American success story is one of indivdual freedom and the creativity it spawns. The government welfare state inherently suppresses individual freedom and thus the creativity needed to expand the American success story. Trumo’s massive deregulation and individual tax cuts help, but there are far too many who find convenient ways never to participate in a positive future for America – or for that matter the western world civilization.