Metro off the tracks

Still off the tracks. Despite promising efforts by top-level management, the Washington Metro corporate culture is still dysfunctional. An audit of $1.9 million in blanket purchase agreements found missing and incomplete documents, reports the Washington Times.

“Auditors found that Metro employees failed to record $845,000 as BPAs in their accounting software, a problem the inspector general attributed to poor controls and lack of staff training,” the newspaper reports. “As a result, $1.8 million of the $1.9 million sampled contained internal control issues.”

Long and winding road. Southwest Virginia’s twisty, windy roads have been long considered a barrier to economic development because they are so inhospitable to commercial trucking. But local promoters in Tazewell County have turned Route 16 into a tourist magnet. The road, dubbed “Back of the Dragon,” provides gut-wrenching turns and spectacular vistas. Last year an estimated 60,000 motorcycle and sports car enthusiasts passed through the nearby 4,240-person town of Tazewell.

Chris Cannon, executive director of Friends of Southwest Virginia, told the New York Times: “We focus on natural and cultural assets” rather than coal, tobacco and lumber. The region has a bluegrass heritage trail, a crafts collective, and outdoor activities like ATV, riding, hiking, mountain biking, and river running. “We as a region are trying to diversify.”

Resiliency reminder. Former Hurricane Michael was only a tropical storm by the time it barreled through Virginia, but it still caused havoc. Some 585,000 customers in Dominion Energy’s Virginia and North Carolina service territory lost their electric power. As of 7 a.m. Friday, nearly 450,000 still had lights out. reported Dominion in a press release this morning:

Early reports of damage include broken poles, cross arms and downed wire in many locations, as well as transmission lines impacted due to tree damage. There were multiple reports of tornadoes within our service territory. In Northern Neck, a tornado touched down and damaged a Dominion Energy substation.

I hope Dominion is keeping good numbers. Legislators and the public will want an after-action report, with a particular focus on the efficacy of the utility’s undergrounding program. How many underground lines experienced disruption compared to the number that would have been predicted before the lines were buried? How much time did Dominion’s repair teams save as a consequence, and how many customer-hours of electric outages were avoided?

Who’s got the brightest rainbow? The city of Richmond scored higher on the Municipal Equality Index, a scorecard measuring municipal policies regarding the LGBTQ community, than the People’s Republic of Arlington and the People’s Republic of Charlottesville — and Mayor Levar Stoney is darn proud of it. “I am delighted that Richmond is able to progress at this level,” said Stoney in a recent press release drawing attention to the ranking.

“Diversity and inclusion are … cornerstones for attracting and retaining residents, top talent, and industry,” wrote Richard Florida, author of “The Rise of the Creative Class,” in a letter published in the MEI study. “Cities that do not guarantee equal rights to LGBTQ send a strong unwelcoming message to potential visitors, residents, and investors, stymying their potential for economic advancement. In short, many businesses and top talent consider LGBTQ discrimination a deal breaker. … It pays to prioritize inclusion.” 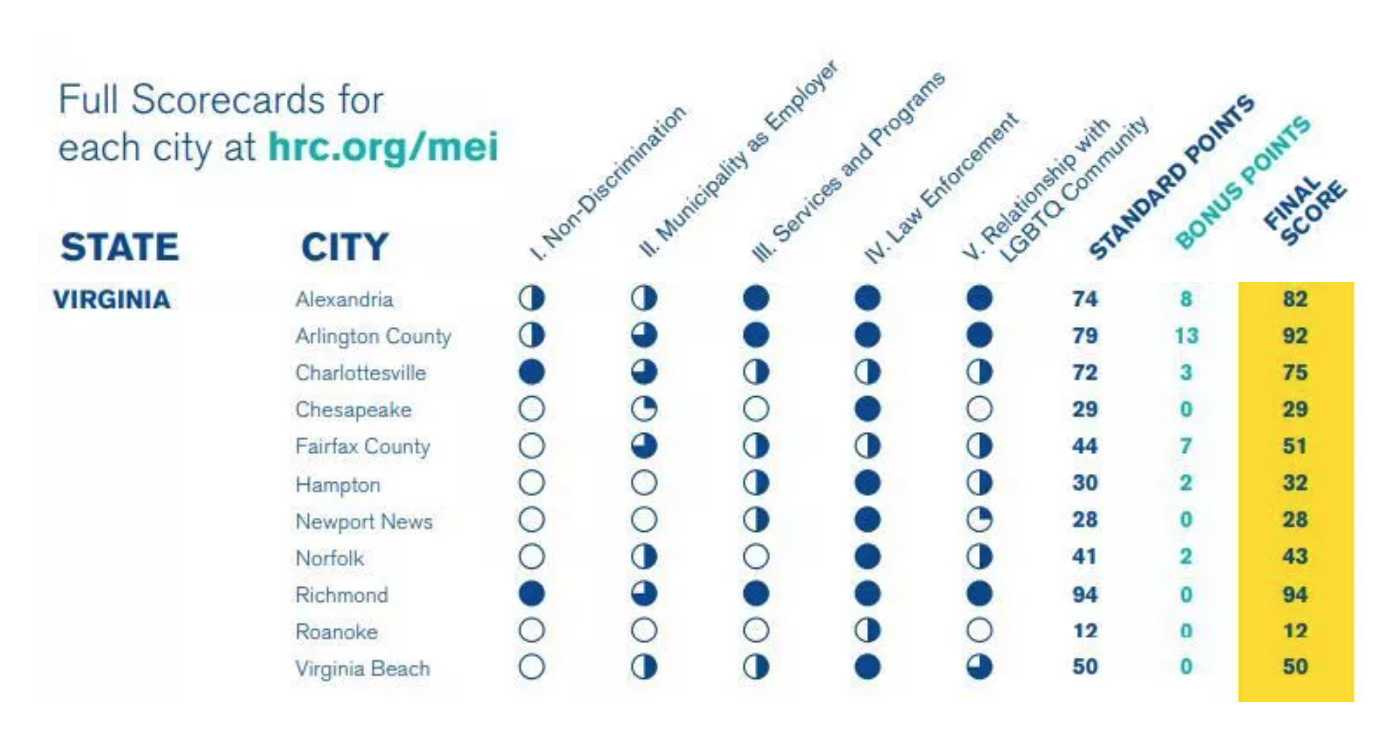