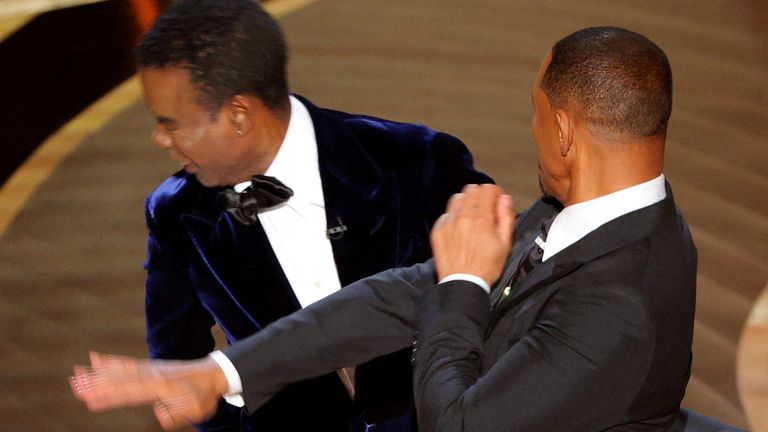 Bad behavior goes with the territory for celebrities

Entertainers, sports figures — and politicians – often think they can act on impulse and pay no consequences

Actor Will Smith’s live TV slap of Chris Rock on the Oscars for his GI Jane joke about Smith’s wife,  Jada Pinkett, is being analyzed and analyzed by every possible talking head in the media – some shows bringing in psychologists to talk about it.

The irony, here, is that Smith struck Rock in retaliation for a joke about his wife’s loss of hair due to alopecia.  However, Smith and Jada Pinkett apparently have an open marriage.  So, one can have sex with Smith’s wife but not make jokes about her.

The media were waiting if Chris Rock were to say something at his gig in Boston and what the motion picture academy, which bestows the Oscars, would do to sanction Smith (if at all).  Smith quit the academy on his own.

Conservatives know all-too-well about the violence inflicted on our opinion leaders and celebrities, but here, it’s celebrity vs celebrity vs. unknown ANTIFA thugs throwing cement milkshakes at Candace Owens and Charlie Hurt in Philadelphia, or students throwing a pie at Ann Coulter years ago when she was about to deliver a speech on campus.

And, then there are the hundreds injured and killed by roving ANTIFA/BLM mobs in 2020.  The number of people beaten up at Trump rallies or hurt at the Jan. 6 assault at the Capitol pales to the Leftist violence following the George Floyd death.

But one celebrity striking another on TV is rare, and so the news media can’t get its fill of it.

I disagree with Jabbar about the racial overtones.  I’ve scanned YouTube for celebrity-on-celebrity violence and it’\s committed by all races and nationalities.

This   “Slap Seen ‘Round the World”  has been seen before.  For example:

And, then there are the politician fighting each other!

Search YouTube on “politicians fighting” and you will see a number of physical squabbles from legislative bodies in Turkey, India, and Ukraine.  (In the interest of full disclosure, because I served in elected office myself for 10 years, I don’t recall raising a hand to anyone, but a few of my colleagues cane close to punching me out.  And threatening me.

Yes,  a number of these slappers were black, but the underlying reason for the bad behavior is arrogance.

Smith was asked to leave the Oscars after the slap and he refused.  Was he arrested and charged with assault?  No, because Chris Rock doesn’t want to press charges and wants this to go away (unless the agents for each actor are colluding to do a big TV special on this to get ratings and money).

So, Smith didn’t slap Rock because it’s “a black thing” but a celebrity thing.  Unfortunately, politicians, movie stars, sports figures and even some news media types get away with their peccadilloes.  That’s because they are treated like royalty or nobles … and in most cultures, royals and nobles are seen as above the rules.

This is why movie stars, politicians, singers and musicians, star athletes, and other famous persons are given more leeway for genuine bad behavior than others would be.

What’s more, celebrities can often benefit financially from bad behavior.  Politicians in Washington are known for this.   For example, Joe Morrissey had an illegal affair with an underage girl, ended up marrying her and getting a seat in the state senate!

But the bad behavior is reward on the GOP side, too. South Carolina Rep. Joe Wilson was rebuked by the House for yelling “You Lie!” during one of President Obama’s State Of The Union addresses – but he fundraised off it beautifully.  Thousands of conservatives lauded his actions.

Same with Marjorie Taylor Green and Lauren Boebert, seen shouting at President Biden during his recent SOU address.  I am positive their campaign war chests benefited.

Until and unless the consuming public turns off the celebrities who behave badly, and as long as corporate America is so willing to excuse those miscreants who are big rainmakers, we will see more and more of this in the future –especially when everyone has a cell phone to record it.

“Yes, a number of these slappers were black…”

Geez, Ken, you are not supposed to say that part out loud. Didn’t you get the Conservative Dog Whistle Blower’s memo…??

The interconnected world has become one giant Colosseum, much for the worse.

The only decent part of the Oscars was Smith defending his wife for an offense against her. It was so out of character for the actors and actresses who are so woke as to be partially insane, that it made and continues to make news.