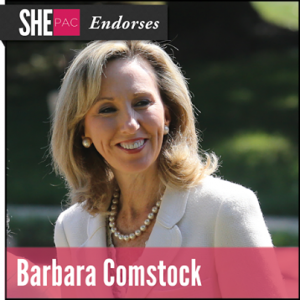 I’m a big fan of ShePAC and their mission and Barbara Comstock received their endorsement late last week.

Teri Christoph is the co-chair of ShePAC. I’ve known her for years and she is an amazing woman, entrepreneur and social media guru. Teri was a co-founder of Smart Girls Politics. I attended the SGP conference during my U.S. Senate campaign and got the wonderful opportunity to be a speaker alongside Andrew Breitbart for the unveiling of the Undefeated movie. It was at this conference that I really got to know Teri. When Teri told me about this new PAC she was helping to form a few years ago, I was very excited. It is desperately needed given the false ‘War on Women’ narrative that is so prevalent today. Heck, we even experience it on “our” side of politics!

If you’re like us, you’ve had enough of the liberal attack machine targeting conservative women with vile, demeaning attacks. Nothing threatens the left more than a woman who rejects their idea of “feminism” and embraces solidly conservative, pro-American values. Luckily, more and more of these kinds of women — principled leaders who are unapologetic in their views — are stepping up and running for office at all levels of government.

She·PAC was created to get more of these women into office. Not only will we make contributions directly to their campaigns, we will take to the front lines with the resources necessary to counter the smear merchants of the left. We know that conservative women will fight for us, now we need to fight for them.

ShePAC also endorsed the hog-castrating female senate candidate, Joni Ernst, I wrote about last week – so you can see that ShePAC believes in diversity when it comes to their female candidates. 🙂

I would never say that you should support a women simply because she is a female. That sort of high rhetoric is obnoxious! However, we do have a strong conservative running who is articulate, savvy, principled, hard-working, responsive to the grassroots, possesses a fantastic voting record (voted against tax increase and budget last year and strong advocate for life), has a well-organized campaign, can raise money, and has put together a very diverse coalition of endorsements . Oh yeah, AND she is also female. All these reasons make her the ideal candidate for a ShePAC endorsement.

Fantastic news, Jamie, thank you for a well-written blog. Like you, I met Teri through Smart Girls Politics.