Is Barbara Comstock Making the Right Call on Trump?

Tenth District Congresswoman Barbara Comstock has made it clear that she does not support the likely Republican nominee, Donald Trump, and she will not attend the Republican convention this summer in Cleveland.Â Â Comstock is not alone, Senators Roy Blount of Missouri, Mark Kirk of Illinois and Kelly Ayotte of New Hampshire have also said they will not be attending the convention and will not support Trump.

Only one quarter of voters agree with those elected’s position. Â A survey out this week shows 58% of Republicans believe elected officials should support the nominee, even if they disagree with him.Â Â 47% of Republicans said the stance of those officials makes them more likely to vote for Donald Trump. 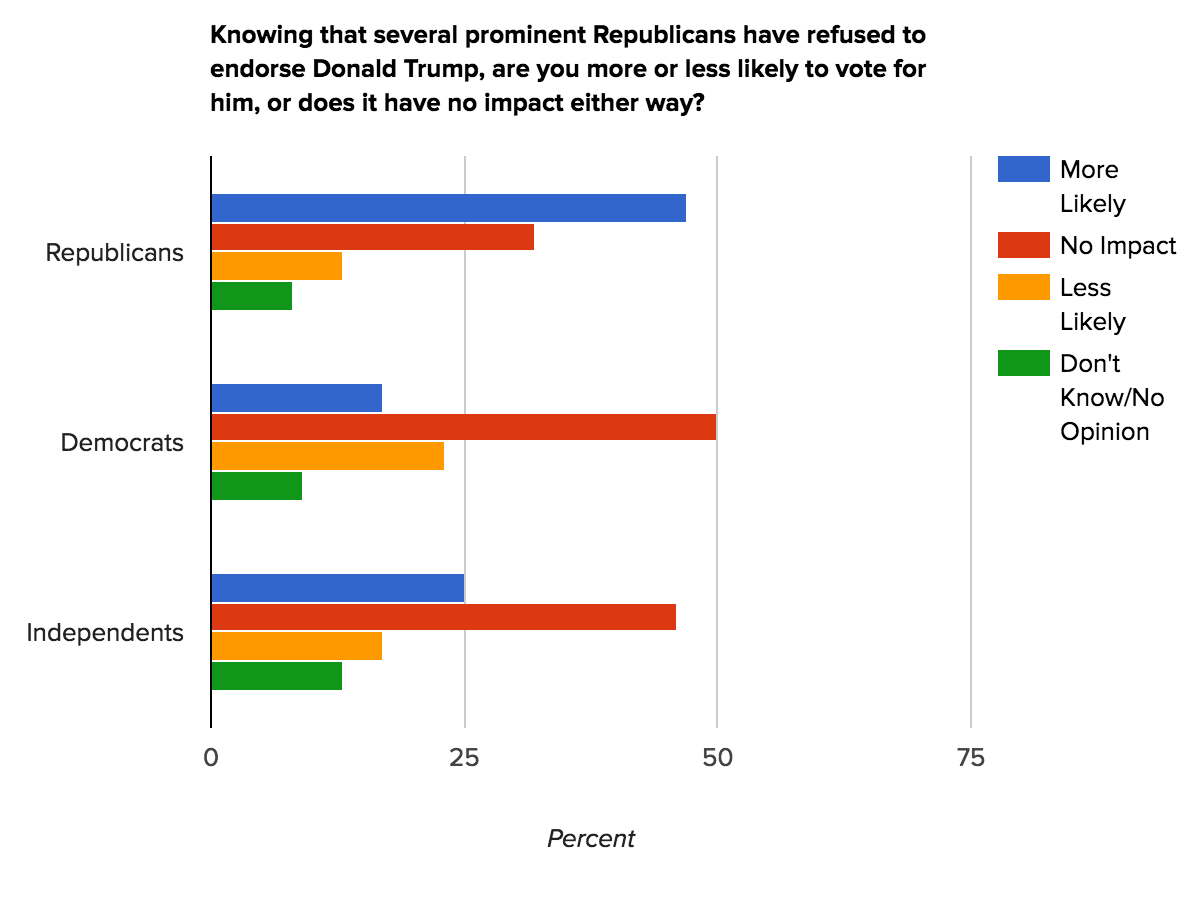 On the other side of the coin, in another survey, 49% of voters say they are somewhat less likely, or much more less likely, to vote for a down ballot candidate who supports Trump. Â Those numbers include 19% of Republicans, 46% of Independents, and 73% of Democrats. Â More details on this survey here.Â

For her re-election it would appear Comstock is making the right call in not supporting Trump while increasing Republican support for him at the same time. Â Pretty neat trick by our savvy Congresswoman.

Is Barbara Comstock Making the Right Call on Trump? was last modified: May 18th, 2016 by Jeanine Martin

Another RINO that needs to be Primaried.

She wasn’t Primaried, thus she is loved — The Conservatives and the Republicans in the party unanimously decided that Barbara was ‘Republican-enough!’ Just like The Donald! Perhaps she doesn’t like him because they are so much alike??

The 10th District Republican Committee fought hard and HAD the option for the party to select the process every cycle — YOUR party leadership decided it best to give that choice to Barbara — I understand it was a close vote. I’m sure it made sense to the party big shots — If there was a political check on the office holder, there might not be so many favorable ‘Puerto Rico-type’ votes???

Just watch, Trump will get her re-elected despite her savvy neat tricks.

I’d just like to know which demographic she is pandering to with this move? The democrat who will think that her rejection of Trump makes her worthy of a vote, or the uppity Trump voter for whom she is publicly expressing disdain?

She may have just blown her VP Slot — or does that cement it with TP Mitt?

Comstock will only last in the 10th District as long as the local Democrats can’t get their act together well enough to place a solid candidate in opposition. A Republican conservative won’t dislodge her today that is a pipe dream, but one of those “the door swings both ways” Republicans that haunt the halls of Richmond might be able to primary her out of the seat. Question is to what end? Swapping one chameleon for another? Sounds like a rather fruitless effort, when the battle could have been fought and won no one answered the drummer’s call and today’s composition of the Republican 10th District will just bump along until the axe drops.

Well said. She has alienated herself from her Red support in VA which is how she was elected in the first place. Her voting record is purple at best but perhaps that is the best until we put a stop to federal spending in DC and the leeches go back home.

Blunt has said he is “for Trump.” http://www.rightwingwatch.org/content/after-meeting-trump-roy-blunt-says-hes-him

I like(d) her once. My guess is that the DC bubble has consumed her, or maybe she was always part of its froth.

JFK airport has a bigger wall than what Trump has proposed. Unfortunately the JFK wall is meant to keep citizens from leaving NYC. TSA designed and built. Republican endorsed.

I thought Robert Moses was a Dem?

Tell me this, why does the establisment not make it official? How? Just go ahead and put Comstock’s picture on Wheaties cereal boxes?

You guy’s got no creditably or consistency.

Ah yes, another who in their time in DC, has only slowed down the Obama agenda from 70-to-65mph.

My post for another outlet, but it sums up the situation well. Her view is shortsighted as most #nevertrumpers will come around to Donny’s way of thinking come November.

You never earned my vote and I gave it to you anyway. After listening to your vacuous stump speeches in which you made no policy statements whatsoever but continually listed all the people that endorsed you I saw no real reason to vote for you. Del. Bob Marshal was far more learned than you and more deserving of the position. But you won the primary and I voted for you because even the worst Republican is better than the best Democrat. If you fail to recognize that, then I donâ€™t need to vote for you again. I will, however, vote for Mr. Trump because, like it or not, he won the primary fair and square. Those that donâ€™t like that fact have the opportunity to do something about it in 4 years.

PS There is more to being a congressman than raising money. Try voting like a Republican. You may find it a refreshing change.

I like Barbara and I understand that someone who reflects my views probably could not win in the Tenth CD.

Uh-huh….well Frank Wolf didn’t have a problem with it so that dispenses with that nonsense pretty completely. Maybe she should give him a call to see how it’s done. If not, I hope he’s working hard on training us a decent replacement for her and the sooner the better.

The more polite thing would be for us to help her by advising her, here’s a good start:

She, like Trump, is the best the party has to offer — Truly sad that Trump will end up being a better Republican than she could.

At this point, it really boils down to Hillary, or The Donald. Is she really saying she can’t support Trump, because that’s tacit support for Hillary. If Trump doesn’t win, Hillary does (or Bernie, maybe). I can’t believe the GOP is so short-sighted that they can’t get behind the candidate that won. You may not favor him, but he’s the guy. I think its attitudes like this that have lots of people ticked off about the GOP, and wanting change.

It’s just a play for support from her moderate voters.

She needs to poll the Washington leadership to discover her position.

My personal opinion she made a huge mistake. Why any politician up for re-election would want to anger the 35,000 voters in her district that supported Trump is a miscalculation. She already has the support of all of the Rubio supporters so now she has caused a fissure in her own district.

Barbara was already in danger with conservatives in her district because of some of her votes she has taken. Her dismissal of Trump as a real candidate, is demonstrating a level of intolerance towards the will of Republican voters not only in her district.

Her continued bashing of Trump even triggered a visit by Hillary into Loudoun County.

Below is a poll which states,”Majority of Republican Voters Trust Trump over Ryan.

I hope she changes her mind and jumps on the Trump train but I won’t hold my breath.

She’s only in danger if a conservative runs against her and that’s not happening.

What would make the electorate prefer the imitation to the real?

She won when she made her savvy neat trick with the Republican 10th District Committee — it was at that time she became THE nominee, not OUR nominee — only The Donald can save her fanny this election.

We can thank 10th district Chairman Jo Thoburn for making Comstock Congresswoman for life. Thoburn broke the tie (twice) assuring Comstock of a primary for life.

Primary for life or for the duration of sequential successful re-elections. (Assuming she doesn’t snatch defeat from the arms of her rescuer.)

One less democrat at the convention.

She’s entitled to her opinion but if she wants me to put her bumper sticker on my car this time she better understand it’ll be right next to the one for Trump already there.

It might be a savvy trick, but I hope she’s just doing the right thing without regard to political consequences.

Most of those who did ask for her support ended up losing their elections last year. Just sayin’

Either the support was toxic or her blazer has no coat-tails.