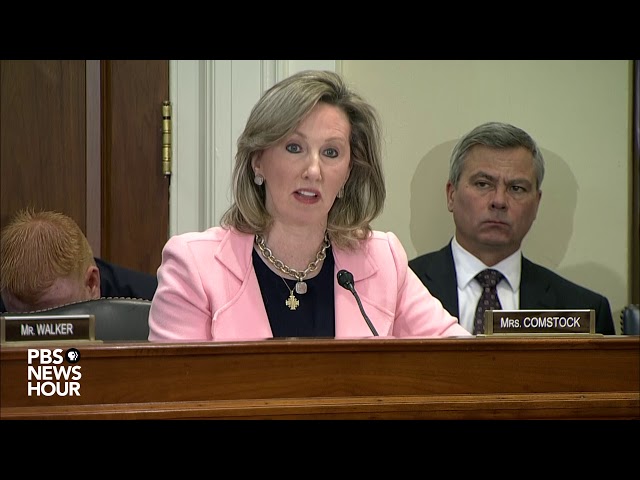 Barbara Comstock represents Virginia’s 10th Congressional District in the U.S. House of Representatives.  You would think she has her hands full serving her constituents and fending off a primary challenge next year.  So why is she tweeting about a special election Senate race in Alabama?

Last Saturday, Rep. Comstock took to Twitter to equate AL Senate candidate Judge Roy Moore with Harvey Weinstein, Anthony Weiner and Roger Ailes (now deceased).  During the closing weeks of a hotly contested campaign, Judge Moore has come under suspicious and withering attack.  Comstock declared, “Roy Moore should not serve in the U. S. Senate.”  What was her proof of his alleged behavior?  None.  But proof doesn’t matter when defeating a candidate who would help Drain the Swamp is what matters.

Judge Moore was duly elected by the citizens of AL in a hotly contested primary to be the Republican candidate in a special election; this December election will fill the Senate seat vacated by Jeff Sessions when he became Attorney General of the United States.  Senate Majority Leader Mitch McConnell worked hard to elect Moore’s opponent, who was the candidate favored by the Establishment (otherwise known as the “Swamp”).

Suffice it to say, the political Establishment in Washington, DC does not want Judge Roy Moore serving in the U. S. Senate!  He is simply too conservative.  Judge Moore has been in the public limelight for more than 40 years, and only now are lurid allegations being made against his character — allegations that are eerily reminiscent of other salacious political attacks against people not favored by the political elite.

Now back to Barbara Comstock.  As a member of Congress from Virginia, why would Barbara Comstock jump into the political fray of a Senate election in Alabama, where unproven allegations carry the whiff of political dirty tricks?  Might she simply be following orders from her Party’s leadership, who do not want candidate Moore’s conservative voice in Congress?

A fundamental tenet of our judicial system is that a person is innocent until proven guilty. Apparently, Rep. Comstock gives no presumption of innocence to a man whom the Swamp loathes.

One final observation.  Rep. Comstock seems to favor wearing a necklace featuring a cross, a symbol of Christian faith and one which memorializes the crucifixion of an innocent man …. a man not given the presumption of innocence.

(Also published as an LTE at FairfaxTimes.com)

Wow! Local nativist Cathy Trauernicht really knows how to go over the top.

First, she attacked Rep Barbara Comstock a few months ago for sponsoring a simple anti-hate crimes resolution that was already unanimously passed in the Senate. The resolution introduced by Rep. Comstock in the House was passed by all 100 Senators — including Ted Cruz, Mike Lee, et al. David Duke did denounce it — in case you need a sense of Ms. Trauernicht’s sensibilities.

Now, in her latest rant, Ms. Trauernicht compares the poor, put upon Roy Moore to Jesus Christ. Jesus Christ! And she attacks Rep. Comstock for daring to wear a cross when she won’t defend the sainted Roy Moore. The nerve!

You can’t make this up. Roy Moore has been universally denounced including by Senators Ted Cruz, Mike Lee, and Tom Cotton — all of whom have withdrawn their support. The RNC — which is controlled by the White House — has withdrawn their support. Yet, Ms. Trauernicht is standing by her savior Moore who himself said he “asked permission” to date teenagers and even Sean Hannity can’t defend anymore. As Senator Cotton said, “Roy Moore faces specific, credible allegations and he hasn’t offered a specific credible defense. I don’t support him.” I’m pleased that Rep. Comstock is in line with these Senators and not Ms. Trauernicht.

Now, calm down, Steve. And let’s take another look at that “anti-hate crimes” resolution. It passed the Senate, but there was no recorded vote and no way of telling if one or 25 or 50 or 100 Senators were on the floor at the time of passage. That’s one of those legislative sleight of hands that happens when citizens, let alone other Senators, aren’t looking. I was told by a Senate staffer that the resolution was brought up on the floor calendar unexpectedly, and passed without any record of who was there to vote. So the term “unanimous” is misleading at best, disinformation at worst. There were not 100 Senators on the floor for that vote. That resolution, and the Comstock-sponored one like it, are red herrings. It’s best to do your homework, and not be tempted to front for an aggrieved party. In conclusion, if you re-read what I wrote, you’ll see that I do not defend Roy Moore. I connect dots. Mitch McConnell spent $30 MILLION to defeat Judge Moore in the primary. It didn’t work. So now we witness the politics of personal destruction, after a 40+ year public career. The Swamp has a track record. It looks to me like the track record is repeating itself. That’s all I’m saying.

A track record of what, doing the right thing? They spent that money because Roy Moore is a simply appalling candidate. But even with that, Mitch McConnell would rather cut off his arm than give a seat to the Democrats, so he was going to support Roy Moore regardless of his racist past. And then Moore crossed another line. McConnell had no choice. How anyone is defending Moore is beyond me.

Let’s not forget that Mitch did not hesitate to spend millions to defeat the TEA Party candidate in Mississippi against Thad Cochran, long time Establishment lap dog for McConnell. Mitch and his crew did not hesitate to commit voter fraud in the Primary by paying poor Democrats with fifteen dollars cash in stuffed envelops to vote for Thad. He is not above creating a bogus character assination of anyone that is a threat to his power and position.

I was a North supporter and well remember what John Warner orchestrated to undermine North.

Do you mean Paul Ryan?

innocent until proven guilty is more a standard for legal issue than for one of perception. is Judge Moore under criminal or civil litigation? if not, the legal standards are a red herring.

Barbara voted for President Trump’s tax reform package on Thursday. The vote took courage, as many of her big donors and constituents itemize thier taxes and take the loophole deductions. That was her best vote ever. Give credit where it is due. The President wants to take the tax code power away from the swamp and give it to working people.

Is that one vote worth the millions that her and her office have cost us.

With all the accusations of sexual misconduct on the Hill, one would think Ms Comstock would want to clean up her own workplace before venturing off to Alabama.

Something seems off about Moore. That being said, I do find it to be a major double standard that while the Washington Post has been investigating him for months (arguments on both sides whether fairly or not), they publish an article today from a self-proclaimed “feminist” who thinks Al Franken should stay. There has not even been a chance to digest his actions from the not-too-distant past, or to see if other victims may come forward.

The standard for being unfit for office has to be the politician’s actions, with no consideration of whether there is a D or R next to their name.

Good luck with that!

Where there is smoke – there is usually fire. Particularly if lots of smokes are popping up. Given the overwhelmingly left tilt of the media, Republicans have to be squeaky clean to be competitive. Moore is apparently not – given the number of women coming forward. Barbara Comstock is the type of Republican candidate who can still win in northern Virginia and statewide. Too many members of the GOP electorate impose a socially conservative agenda as a litmus test. Comstock will give social conservatives about 70% of what they want. Democrats will give them 7%. Do the math.

I have personally witnessed a number of supposedly harassed women using the victim claims against innocent men. In the Moore case, there is only one claim supported by “evidence”. There are a couple of others that have been repudiated or called into direct question by family members or circumstances. As was the case with Trump and Cain, it is virtually certain that some of the anti-Moore women have jumped on the victim train for money, notoriety, revenge or politics.

If we keep going down this guilty because a woman screamed “victim” track, then everybody is in trouble – including you, me and Jeanine.

Whatever happen 4 decades ago is known but to God at this point. The only smidgen of “proof” is a handwritten note in a yearbook. Unfortunately for the accuser, there is considerable evidence that the handwritten note involves fraud. Thus, at this point, the allegations against Moore are political and constitute the very dirtiest of dirty tricks.

I accuse you of being an accuser. See how this works.