In a shocking vote today Barbara Comstock voted with the three democrats from Virginia to fully fund Department of Homeland Security through September 30, 2015.  Other than Comstock, all Republican Congressmen from Virginia voted against the bill. [read_more]Of course John Boehner voted for the bill, along with Debbie Wasserman Shultz.

“President Obama’s misguided foreign policy that rewards our enemies and slights our allies has created an unstable world. Israeli Prime Minister Benjamin Netanyahu reminded all of us of that today in the House.  I voted today to fund the Department of Homeland Security because we must continue to protect our borders, air travel, and ports with the dedicated employees that work tirelessly each and every day to keep America safe in this dangerous world.

The measure will not target Obama’s executive actions on immigration, giving Democrats what they have long demanded and potentially enraging conservatives bent on fighting the president on immigration.

It is maddening when a Republican Congressman gives the democrats what they have “long demanded”, and yes, conservatives are enraged. 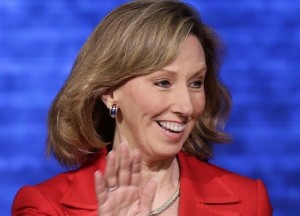 Congressman Comstock’s vote is appalling and an example of exactly why Republicans in Virginia need local conventions to nominate our candidates. If Comstock continues down the path of voting with democrats, and cozying up to Eric Cantor and John Boehner, Republicans in the 10th district will be able to choose her replacement in a convention in 2016. Barbara Comstock will be waving good-bye, as she is in the accompanying photograph.