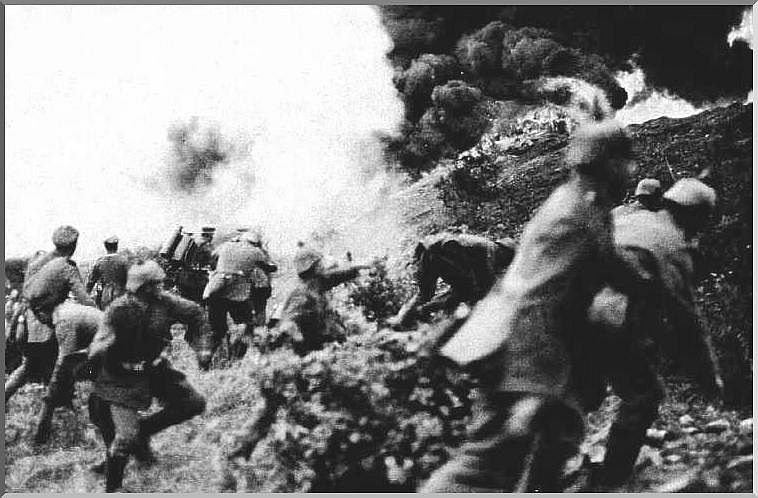 Battle for the Ages

100-year anniversaries of the Great War have been speeding by in the current decade, so I’d like to recall one more landmark event from that time before it all goes down the memory-hole.

The greatest battle in history commenced 103 years ago, on February 21, 1916. Verdun – the ghastly World War I battle that once resonated like a gong of doom in the consciousness of every schoolboy, but is now known to few – had far-reaching effects that are little understood today.

Near-term, the battle caused the deaths of hundreds of thousands (some claim as many as 700,000) French and German soldiers – plus twice that many wounded – in a death-struggle for ground around France’s ancient capital that French patriots called “The Soul of France.” After ten months of desperate fighting, the military situation was essentially as it had been before the battle began. Immense losses produced no measurable movement of the front.

The Battle of Verdun was conceived in late 1915 by German Commander-in-chief General Erich von Falkenhayn as a strategy to remove France from the War. Knowing that defeating Britain was the key to victory, Falkenhayn believed that if France were first defeated or rendered militarily ineffectual, the defeat of Britain would follow. He fixed upon Verdun because he believed it represented ground so sacred to the French that they would throw in all their forces to defend it. It would not be a battle to gain territory or achieve a strategic position, but would simply be a killing ground to “bleed the French Army white” – as Falkenhayn described it to the Kaiser.

Verdun was an ancient capital of France, dating back to the Fourth century. Militarily, it’s location made it the key to the Champagne Plain, and thus to Paris itself. It had been captured by the Prussians in 1792, and was the last stronghold overcome by Prussia in the war of 1870, in which France had suffered a humiliating defeat. The Prussian triumph led to the proclamation of the German Second Empire in 1871, when Wilhelm I was crowned as Kaiser in the Versailles Hall of Mirrors. Thus, the defense of Verdun was invested with enormous significance for the French people.

In the 1880s France built a double ring of a dozen underground forts around Verdun to ensure its protection. But by 1915 military engineers had lost confidence in fixed forts because German heavy artillery had so effectively destroyed the Belgian forts in 1914. By the time Falkenhayn devised his plan to attack Verdun, its forts had been mostly stripped of their guns and personnel for use elsewhere on the Western Front.

With great stealth the Germans prepared a surprise attack on Verdun, intended to begin on February 11, 1916. They would have achieved complete surprise, and would probably have taken Verdun and its forts, had they attacked on schedule. But after German forces were in position, severe winter weather delayed the attack. The element of surprise was thus lost, enabling the French to transfer two divisions to defend the position.

The attack finally began on February 21 with a stupendous bombardment from 1200 German artillery pieces, including the 420 mm mortars used against Belgium’s forts. In the greatest artillery fusillade in the history of warfare, Germany fired some 2 million shells on the first day of the battle. (Engineers later determined that the bombardment barely touched the underground forts, which had significant earth cover as well as heavy concrete and masonry construction.)

Following the opening fusilade, Crown Prince Rupprecht of Bavaria hurled nine of his 26 divisions at Verdun, achieving some initial successes and capturing the key fort, Douaumont – previously thought impregnable – on February 25. This put Verdun within reach. But as Falkenhayn had predicted, the French resisted desperately. Suffering appalling losses, they bought time to improve their fortifications as the battle raged back and forth through the spring and into June. The French Army was re-supplied via a continual stream of trucks along the legendary Voie Sacree (Sacred Way) – a nondescript road which was the only open route into the French lines.

Verdun was the first battle of the Great War in which phosgene gas was used. The Germans, who introduced it, fired over 100,000 phosgene artillery shells, causing thousands of French casualties. (When inhaled, phosgene turns into hydrochloric acid, causing irreversible damage to the lungs.)

When the British Army launched the Battle of the Somme (July 1, 1916), the Germans had to divert some forces to that salient. Thereafter, the inferno of Verdun damped down as the Germans shifted their strategic emphasis elsewhere. Later in the year, the French Army regained most of the ground they had lost at Verdun, including Fort Douaumont.

Falkenhayn was demoted from high command six months into the battle, but historians generally agree that he achieved his war aim of mortally wounding the French Army at Verdun. After 1916, the British Army took the lead in fighting the Central Powers. They were joined by the Americans in 1918.

The melancholy history of French arms since the Great War is plain to see: defeat in 1940 after six weeks of ineffective combat against invading German forces; encirclement and defeat at Dien Bien Phu, Vietnam, 1954; reversal at Algiers, 1958. Today, France is a hollow power, lacking the will or ability to fight for itself or for anyone else.

Many historians argue that the German attack on Verdun kept Russia in the war for two additional years. This theory is based on the known tension within the German high command between the Falkenhayn and Hindenburg factions.

General Paul von Hindenburg, aged 66, was already retired when he was recalled to service in 1914 to command the Eighth Army. The Eighth was positioned to repel an expected Russian attack in East Prussia, while the other seven German armies followed the Schlieffen Plan to deal a (hopefully decisive) lethal right hook against France.

The Russians mobilized and marched westward far more quickly than anticipated, reaching East Prussia with their First and Second Armies by late August 1914. Hindenburg and his able assistant, General Erich Ludendorff, exploited a gap between the two Russian armies to surround and destroy Russia’s Second Army at Tannenberg, East Prussia. It was Germany’s first great victory of the war. A series of follow-up battles destroyed most of Russia’s First Army as well.

This success elevated the stock of Hindenburg and Ludendorff in the German high command. They subsequently argued that Russia was fatally weak and could be knocked out of the war by a determined German effort in the east, while France and England could be merely held in the west.

Falkenhayn had argued for the opposite strategy. He prevailed, and Verdun was the result. As the Verdun strategy flagged, Falkenhayn was replaced by Hindenburg and Ludendorff. But the opportunity to force Russia’s early withdrawal from the war had passed.

Had the proposed Hindenburg-Ludendorff strategy been adopted in 1916, it might have succeeded, causing Russia to sue for peace without undergoing revolution (although many historians disagree). By attacking Verdun, however, Germany took the pressure off Russia and allowed her to stay in the war through 1918. After the Tsar’s abdication in March 1917, the Kerensky government continued the war.

By late 1917 the German high command saw the removal of Russia from the war as a critical need, but they could no longer wait for German arms to accomplish it. Instead, they made a deal with the Devil. They shipped Vladimir Lenin from Switzerland to Russia – like a “bacillus in a sealed train,” one historian described it – having secured from Lenin a promise to take Russia out of the war as soon as he seized power.

Lenin honored this agreement, as it was entirely in his interest to do. The 1918 Treaty of Brest Litovsk ceded over 300,000 square miles of Russian territory to Germany, including much of the Ukraine, Finland, Estonia, Lithuania, and Poland. And it freed German forces to strike a mighty blow in the west that almost succeeded in winning the war.

By March 1918, however, America had been in the war for a year, having joined the Entente in April 1917, after Germany resumed unrestricted submarine warfare. Two million fresh American troops in the field were too much for Germany to overcome. Her last-ditch St. Michael Offensive was repelled, and she sued for peace. The Armistice took effect on November 11, 1918.

Deeply impressed by the indestructibility of the Verdun forts, French War Minister André Maginot – a veteran of Verdun – convinced France to build a line of underground forts along the German border during the 1930s. Maginot believed that the interconnected system of sophisticated fortifications would give France time to mobilize and deploy her forces in the event of a German attack. They would stop the Hun, provided the Hun came that way.

But Maginot and his engineers did not anticipate mobile armored units, which were unknown at the time of Verdun. In May 1940, German Panzer columns drove through the lightly guarded Ardennes forests, blew past the Maginot Line, and sped across France to pin French and British forces against the Belgian coast. Britain mobilized a great flotilla of small boats to rescue soldiers of its trapped army at Dunkirk, and France sued for peace after six weeks of fighting.

In the final reckoning, the Verdun Strategy led to Germany’s defeat in both world wars. Germany’s failure to defeat Russia early in the war allowed Russia (and then the USSR) to emerge from the ashes of World War I as a great power. That strategic error had a profound effect on the 20th century.

In both the near and longer term, the Battle of Verdun –

Other actors in the drama of Verdun:

This brief treatment scarcely conveys the horror of Verdun. Americans today – peaceably working, studying, and playing in their clean, orderly communities – cannot comprehend the deafening, horrific, gas-filled wasteland of a field of slaughter barely ten miles square that chewed up the lives of three-quarters of a million men. Over a ton of high explosives fell on every square yard of the Verdun battlefield. Nine entire villages were destroyed and rendered permanently uninhabitable.

Most of that land is now off-limits to ordinary pedestrians or motorists, despite a century-long effort to clear it of unexploded munitions. When my wife and I visited the battlefield in 1987, our guide noted that someone is killed or injured nearly every year by explosion of an old shell or grenade. Just days earlier a picnicking family had found a live grenade beneath their picnic table on the edge of the battle area. Buried, unexploded artillery shells filled with poison gas are a particular concern. Officials know many still remain undiscovered.

The Verdun Battlefield is dotted with forty-three military cemeteries, each containing the graves of 10,000-15,000 German or French soldiers. The central monument at Verdun is the great, solemn Ossuary (House of Bones), with its high tower (reminiscent of an artillery shell) and its long, polished gallery. Vaults beneath the floor, at each end of the hushed gallery, contain the remains of unknown soldiers recovered from the battlefield since 1916. The great stacks of bones and heaps of skulls can be viewed through windows outside the memorial. The remains of 130,000 unknown soldiers of Verdun lie in these vaults. It is an appalling sight that stays with you for life.

Battle for the Ages was last modified: September 8th, 2019 by Woody Zimmerman
0 comment