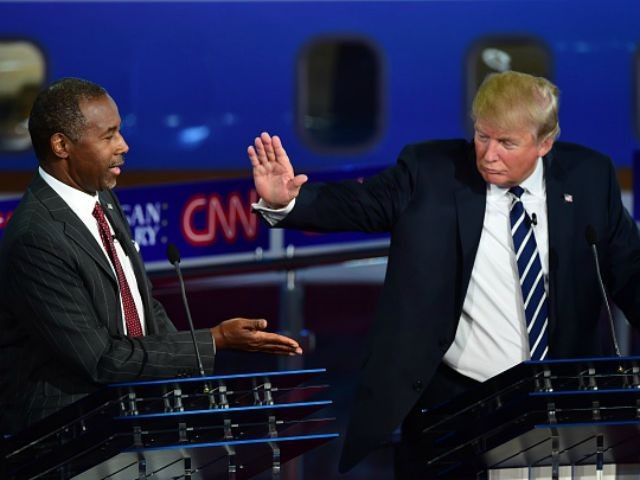 On Friday morning Ben Carson will endorse Donald Trump.  What a disappointment. More here and here.

Ok GOP e Light here at the Bull Elephant. Don’t support Trump. Go ahead and then say that when he loses… OH my it is because of his ideas to put up a border fence. We have to support endless immigration because you know… that will make third world people want to vote for the GOP e or Lite as you guys are.

Your stupid party is dead. It is too late. Virginia is going to be Democrat Socialist within ten years… Immigration, especially illegal immigration is surging here… SURGING you fools.
Go join the Bearing Drift fantasy boys who carry the Chamber of Commerce corporate message..

AND get ready to pay taxes for immigration on a massive scale. What do you think is happening to the Fairfax County School System… Obama’s million child march to the US is coming to Fairfax. RED INK everywhere.

America is the biggest business in the world.
I expect Trump to look at every agency as a subsidiary company in the parent corporation. As with a Christie Attorney General , Ben Carson will fit very nicely in my American Goverment Corporation. We just can’t always Tax and Cut , at some point we must be responsible and run the darn goverment , ” we will do things properly ” , Trump.
All the other canidates will appoint positions in these agencies and Depts. in return for work performed in the campaign , Trump will not.
Trump will ask what talent or skills do you bring to this position , a job interview if you will and about darn time.
We have elected previous Presidents { CEO’s } who have done nothing but sell out Americas’ Equity for personal financial gains , this will not happen in only a Trump Presidency.
I made my mind up in Dec 2014 { prior to political BS }bring me Trump or Republicans have nothing for America.
Do we really want to continue to layoff 50 engineers at Areva Lynchburg only to have McAuliffe celebrate 50 new box makers in a Botetourt County box maker expansion a week later ?
American Jobs
Defending the American Dream
Trump in 2016

Cruz is looking increasingly like a third cousin of the Bush family. We’re done with them, and we’re fully expecting Trump to vanquish the clinton crime family this November.

One fewer guy to pay any attention to. Carson will join Christie, Huckabee, and Santorum in my book.

I’ve been a Republican since I was 16. I would rather die than bear the same of voting for or supporting in any capacity, Donald Trump for President.

Dr. Carson, a very thoughtful man, obviously looked at the Republican field and decided who the thought should be the nominee.

Regardless, you shouldn’t threaten your own death.

Naw, Carson’s still mad about Iowa. And Trump’s always been nice to him. If Trump wins, Carson could be secretary of HHS.

Funny, I’ve been an active Republican voter since 2004 when I turned 18. Before I was of age, I supported them in other ways. I’m extremely tired of the GOP class not delivering on anything for the base, but only placating the dems. Trump is just what this country needs. Cruz is just another professional politician.

We want a Leader, not a Preacher (i.e. Cruz (though he’s not even carrying the evangelicals))

I’ve been an active Republican voter since 2008, when I turned 18. Trump isn’t what we need.

Trump supports PP, is supported by the KKK, and says that he loves Israel but he’ll leave them hanging. No. He and the Establishment are exactly the same, they both lie and then whine when you ask them why they’ve changed their mind and broken their promises.

Strength doesn’t mean good, isn’t that what Trump himself said? It doesn’t make a good leader either. He shot down his own supporter’s argument for his candidacy with that. The rest of us never thought he was strong in the first place.

I see, and what has Trump done to stop Obamacare?

To stop the Democrat agenda?