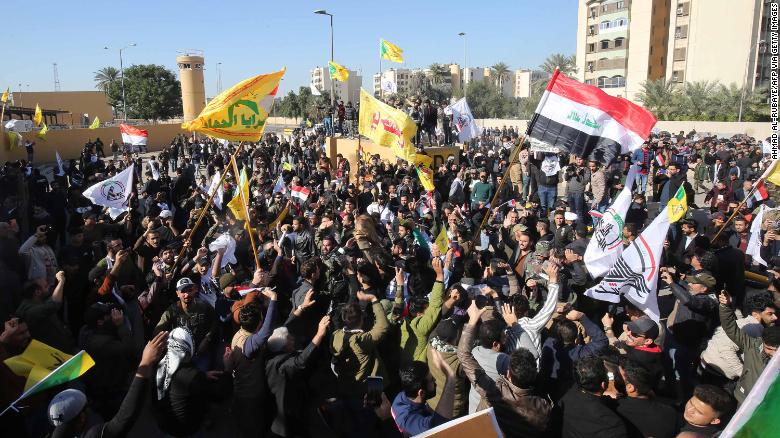 Protesters storming the US embassy in Baghdad (CNN.com)

It seems that the Benghazi attackers knew in advance that the response from the Obama administration would be weak.  Thus, the risk of retaliation from the American military would be minimal. (Four American citizens, including the ambassador, lost their lives in this attack.)

There are a lot of theories associated with why a minimal American military defense was mustered even though the ambassador had pleaded for help days before the attack occurred.  Most of these theories assume the use of the Benghazi embassy as cover for covert activities.

Contrast this with what happened in Baghdad.

It appears the Iranian government, seeing that President Trump was loath to sacrifice lives if property only was destroyed, decided to test this theory of restraint.  They sent a group of mainly unarmed pro-Iranian rioters to the embassy.  Embassy property was destroyed, but no American lives were lost – nor for that matter were any Iranian backed rioters harmed.

It appears that the Baghdad embassy attack was triggered by the American military’s obliteration of the Iranian backed kataib Hezbollah militia that had attacked and killed an American and wounded a number of American military personnel just a few days earlier.

The Obama response to Benghazi was to blame a would-be filmmaker who was trying to sell a new project to potential backers.  The trump response is yet to be fully seen, but he issued a threat and not a warning to Iran about their behavior.

The Obama response to Benghazi was weakness and blame shifting.  So far, the Trump response has been direct – immediately sending the marines to re-enforce the Baghdad embassy and adding thousands of military personnel to the immediate region.

Is there more to come?  I won’t speculate, but from my own experience, wargaming is taking place within the Pentagon.