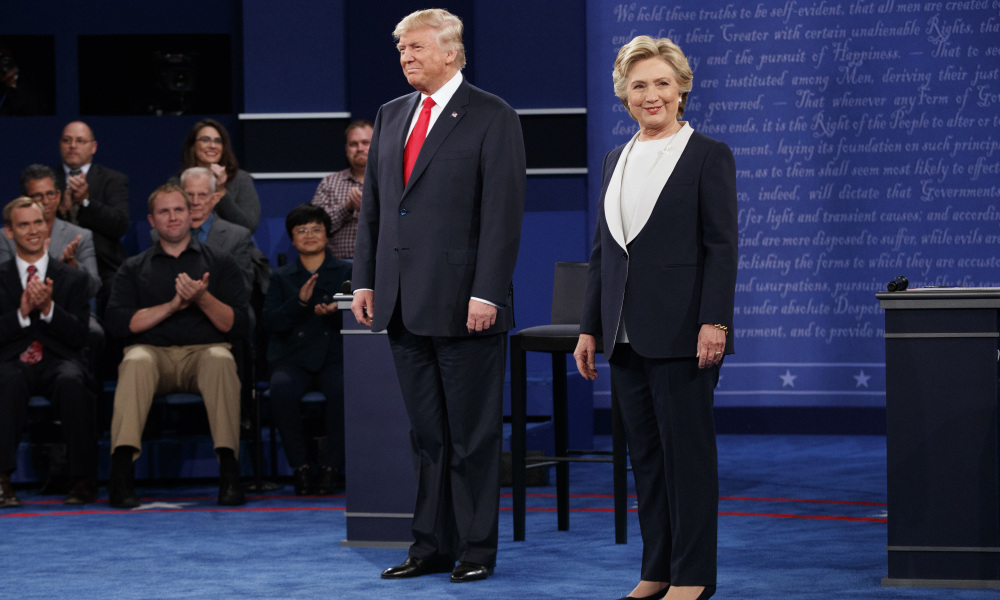 lol, so Melania’s choice of attire for the evening? A pant suit (FU Hillary) and what is known as a “pussy bow” top (FU everyone else) Coincidence? I think not. She’s a model, it’s not as if she wasn’t well aware of the messaging.

Eh, I’m sorry, fairly conservative fella who happens to like fashion. What can I say? Made me laugh. Carry on but the troll is strong on this one……..

White nationalists are working to identify their “top people” — or at least any racist with a college degree — to staff a potential Donald Trump administration.

William Johnson, chairman of the white nationalist American Freedom Party, and other
organized racists who back the Republican presidential nominee see a
chance to set White House policy if Trump is elected next month, reported The Guardian.

Johnson, who briefly was a Trump delegate from California, and Richard Spencer, director of the National Policy Institute and originator of the term “alt-right,” believe Trump might
pack his cabinet with white supremacists.

“I want Jared Taylor [of American Renaissance] as UN Ambassador, and Kevin MacDonald [an evolutionary psychologist] as secretary of health and Ann Coulter as homeland security,” Johnson said, recalling a conversation he had with Spencer three months ago.

Spencer said at the time that his wish list was “a pipe dream,” but now they believe it could become a reality.

“If Trump wins, all the establishment Republicans, they’re gone,” Johnson said. “They hate him! So who’s left? If we can lobby, we can put our people in there.”

Johnson and other members of his white nationalist organization, which is working to turn the United States into a white-only ethnostate, have been poring over “The Plum Book” that lists thousands of civil service positions in the federal government.

“It’s plum because of the color, but also because of the plum positions – there are 20,000 jobs in that book that are open to a new administration,” Johnson said.

“So we need to identify our top people!” said Eric, a neo-Nazi who moved on from Buddhism to Norse and Celtic religion.

“Just anyone with a college degree!” Johnson said.

The Guardian reported that Eric was practically bouncing in his seat with excitement about helping to serve as Trump’s transition team.

A couple of things….we don’t appreciate your language using bullsh**. We also don’t care for this garbage that somehow white supremacists will have civil service hiring authority in Trump’s administration.

The take from REAL americans

The first post-debate polls are coming in, and once again, viewers are declaring Hillary Clinton the winner.

Pundits and republican apologists have been busy trying to spin Sunday night’s debate as a
positive for Trump, because he didn’t actually grab anyone’s crotch on stage. But
regular Americans who actually watched the event have reached a
different conclusion.

Some people watch the entire game. Some an inning or two, others just their guy.

I chose to watch a reality show. This one was on during the political comedy hour.

Your time was better utilized.

My point was that it is a series or game, and not just the play in front of you.

Let’s move ahead 3 months. Will the Republicans congress even allow electricity to be turned on in the White House?

Clinton never said how she would fix the ACA? Congress will never let her do anything that takes less money from populists.

Why don’t you tell us her plan to get a fix for the ACA through congress?

America is responsible for the destruction of Syria and the middle-east. That AIPAC money was just to hard to resist.

The CNN poll also included 58 percent who were going to vote for Hillary anyway. So not all of her fans thought she won.

Why? On what grounds?

Trump announced, though he “hated to say it,” that if he wins, he
will appoint a special prosecutor to go after Hillary Clinton. Because
nothing says democracy like threatening to lock up your opponent.

On Syria, Donald Trump explicitly disagreed with Mike Pence
saying “He and I haven’t spoken and we disagree.” Where Pence was ready
to go after Assad’s assets to protect Aleppo, Donald Trump instead
turned his back on the rebels, saying we “don’t know who they are” and
calling them worse than Assad and Russia. At one point Trump said “Syria
is Russia,” and as he always does, Donald Trump supported Russia. Putin
got his money’s worth tonight.

Given the choice between Pence and Putin, Trump went with Putin.

Trump demonstrated that he has a peculiar form of X-ray vision,
saying that Hillary Clinton has “tremendous hate in her heart,” then
repeating the remark.

Trump admitted to not paying any taxes. Though he dodged the
question the first time, when asked directly he said that “Of course” he
took advantage of the tax loophole that allowed him to avoid taxes for
years. Pressed further, his response on this was the same as it was on
several other question—other people did it. So there.

Trump denied his previous sex tape scandal, the one in which he
tweeted that the nation should go and look at a sex tape which doesn’t
exist.

Trump repeatedly challenged Hillary Clinton over why she, as a
single senator, had not changed the tax code. “If you were an effective
senator, you could have done it!” Making it unclear if Donald Trump
knows how the government works. Actually, making it clear that he
doesn’t.

Trump lied about his position on Iraq. Again. Because there’s no amount of pointing out his lies that will keep him from lying.

Confronted on Russian hacking, Trump not only repeated his previous
statements that Hillary doesn’t know it was Russia—even though two
federal agencies have said it was definitely Russia—and then followed up
with the even more incredible statement: “Maybe there is no hacking.”
Maybe.

Overall, Trump spent the first 20 minutes ranting, then the remainder
of the night merely acting like a creepy stalker. And through it all he
provided enough soundbites to power Hillary through a raft of
commercials where Donald is forced to listen to his own words.

We don’t have a dog in that fight. Unless you count the “donors” to one of Hillary’s foundation or furthering the Muslim Brotherhood.

If Trump threatened Killary, GOOD! Lock her up. She should have a special investigator. Everything she does is a lie and she needs a full audit. This is the candidate our legislators have given us. So everyone hold your nose, grab your photo ID, and go VOTE TRUMP!

Perhaps Hillary should go to her ‘safe place’.

The time for your cherry’s and butterfly’s conversation is over. This country and our founding fathers fought for is about to come to an end. So you can sit there and have your polite conversation while the rest of us try and save our country. BTW you’re welcome.