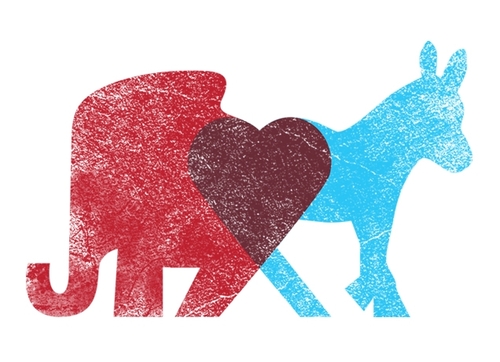 Bi-Partisanship in the Commonwealth and the Capital

The Civil War I’ve predicted and responded to in Virginia has taught me a great deal about partisan politics. Our Party is currently split between an Establishment Candidate who has spent two whole years meeting with and reaching out to activist groups in Virginia and a populist, anti-establishment, anti-Republican candidate from Prince William.

Ed Gillespie has tried to reach out to every faction of the Republican Party. Unfortunately, there are passionate factions that reject corporate welfare recipients and special interests embracing the front runner of our GOP ticket. Corey Stewart is capitalizing on the grassroots’ frustration with RPV.

Therefore, it is clear that there is no way to get a conservative agenda through the legislature. Period.

Only 17% of Americans wanted Speaker Ryan and President Trump’s healthcare bill. We can blame the Democrats, but that would be an easy target and an even easier excuse.

This tells us that the Republican Party is unable to govern. The left and right wings of the GOP are incapable of coming together and making decisions.

The Democrat Party has moved so far to the left that most Democrats now consider themselves Independent. Many of these people voted for Donald Trump. Trump is doing what many of these Independents wanted in the first place: he bombed Syria, he got rid of President Obama’s executive orders, and he pushed for a replacement plan to Obamacare.

Republicans don’t want to replace Obamacare. We want to repeal it. However, powerful interests within the Republican and Democrat Parties will never allow that to happen.

The days of political parties controlling Congress are over. We need intellectuals within both parties to sell compromises and alternatives. We need to pursue bi-partisanship. We need to work together.

The House Freedom Caucus will never get legislation from here to there. Period. Neither will the Tuesday Group. Neither will Congresswoman Cathy McMorris Rodgers and the Republican Study Committee.

We can hold all the ideals that are right in the world, but none of them matter if they have no part in that which becomes law. We have got to stop hating Democrats. Our hatred for Democrats has made it impossible for Democrats that we agree with to run for office and win. Our hatred of Democrats has allowed us to vote for Republicans we don’t believe in.

Republicans have bought into a Scorched Earth philosophy that griws fundraising, but will never increase success in the area of public policy.

We need Democrats. We need Libertarians. We need Conservatives. We need Constitutionalists. That is – if we want to write legislation and see it become law. Sometimes I think that isn’t what we want. Sometimes I think we want to make sure that the only Republicans that have power are Republicans that support our agendas. If that is the case, then how do we defeat Democrats? There are a large number of Americans in this country; and some of them support us and some of them do not.

Bi-Partisanship in the Commonwealth and the Capital was last modified: April 8th, 2017 by Steven Brodie Tucker
19 comments