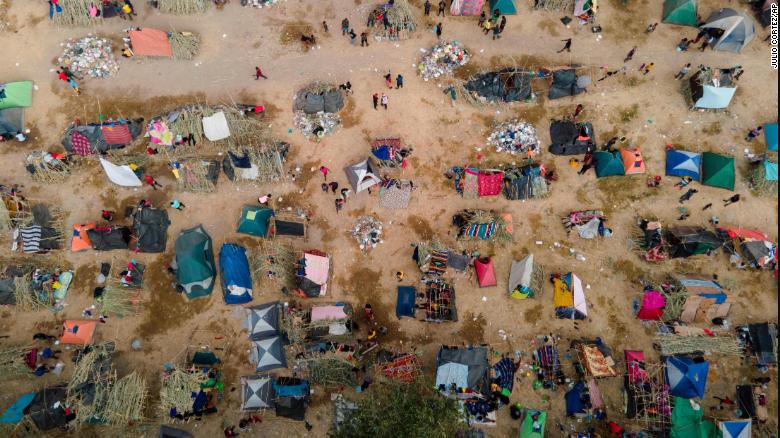 Some of the 12,000 illegal immigrants camped in the border town of Del Rio Texas. (source: CNN.com)

The Biden administration has imposed a very stupid travel ban that gives worse treatment to nations that fought the spread of COVID-19. It is banning almost all travel from safe European countries with low COVID-19 death rates and high vaccination rates. Yet it is permitting travel from countries with high coronavirus death rates and low vaccination rates.

Visitors can’t travel to the U.S. from our NATO allies Portugal, Iceland, Belgium, and France, even though their populations are mostly vaccinated (81% in Portugal, 77% in Iceland, 72% in Belgium, and 64% in France).

But they can travel to the U.S. from Russia, which is only 28% vaccinated. On September 18, 793 Russians died of coronavirus, compared to 307 Americans and 28 French people. Far fewer people died in France, Portugal, Iceland, and Belgium, over the past week, than in Russia  (both in absolute numbers and percentage terms).

People can also travel to the U.S. from Malaysia, which had more deaths (376) than the entire U.S. on September 18, despite having only a tenth of America’s population. Malaysia, a predominantly Muslim southeast Asian country, had more deaths on Saturday than all of Western Europe. But Western Europeans, unlike Malaysians, can’t travel to the U.S.

Visitors can also come from other countries with high COVID death rates, such as Bulgaria and Moldova, which are only 22% vaccinated, and Albania, which is only 29% vaccinated.

People working legally in the U.S. are being trapped overseas due to this travel ban, even though they have jobs and families here. The American Enterprise Institute points out that the “travel ban restricts travel from countries with lower COVID-19 case rates than the countries from which travel is not restricted” and “lower infection rates than the US.” So if a foreign worker living legally in the U.S. “travels to a blacklisted country — where he is less likely to get infected than in the US — he is not allowed to return home.”

Meanwhile, thousands of unvaccinated people are pouring across our southern border “after Biden said illegal immigrants won’t have to get vaccinated,” reports the London Daily Mail. They are coming from Mexico, where COVID-19 is raging, and 765 people died on September 18 — a far higher daily death toll than in the U.S.

But you can’t come from the United Kingdom, unless you have a special exemption. As John Sopel of the BBC noted,

As I am writing this, Prime Minister Boris Johnson is in the air on his way to the US. A couple of dozen journalists will be on the plane with him. An advance party is already in Washington DC. Every one of those will be allowed in because the American authorities have granted them a National Interest Exemption. Without it, you cannot enter the US from the UK…But why? Or to put it simply, what possible justification is there for President Joe Biden to keep this travel ban in place? It’s a blunt instrument that prevents family members from visiting sick relatives, grandparents meeting grandchildren, business-people… from coming into the country to invest.

One last covid funny for the day. Did anyone see the story about BLM protesting a restaurant in New York where they were requiring proof of Fauci’s Leaky vaccination to enter?

Here’s the funny funny part. The story started out as TEXANS who refuse the vaccination cause riot at New York restaurant. All the usual idiots in the media and twitter jumped on that. Ignorant REDNECKS CAN GO BACK TO TEXAS…

Umm… but wait. It turns out the party demanding entrance were… get this TBE troll boys… (BLACK). ooops… which then prompted the BLM crowd to show up to protest at the restaurant with the usual chants and bullhorns. HA!!!
Then the media had to step back and ask about racial justice etc….

So Eric and John…. You CAN mess with TEXAS but you cannot mess with blacks..

Maybe AOC is right. It is time to tax rich Democrat party contributors and multinational corporations to pay for the open border that they support. Quick… someone name me a billionaire that doesn’t openly support the Democrat party? Buffet? Soros.. Zuckerburg… all of the billionaires at Google… Bill Gates.. etc. TAX THEM. Tax the Open Border Bushes too. You installed Biden to achieve this open border… so now you pay for it.
Yeah the covid hypocrisy is ripe.. Biden’s not letting it stand in the way of opening the border that Trump somewhat shut down. That was among that stupid puppets first administrative acts.
So for the vaccine mandate democrats who come here… DHS send people way into the interior… The projected figures of new arrivals since your dopey President took office has levels in the millions. The equivalent of 11 United States are soon to enter the US.
There is no magic dust that is going to turn these people into tax positive contributors… that ship has sailed. The middle class got sucked away with NAFTA, WT agreements, MNF for China.. So, what is left of the US taxpaying base gets to foot the bill for mass migration… especially at the local level.
Democrats get voters… corporations get customers… if you are afraid of covid… you get more spreaders.
Oh well what does it matter?

Any idea what Biden’s reason is?

Tyrants have always used everything available to assert and maintain control.

His corporate donors.. those slimy creatures that spread their influence via K St lobbyists want mass immigration. If you are asking about the part about not requiring Fauci’s magical shot for illegals.
The rest of it is just incomprehensible. Like everything related to Covid. That starts with Fauci funding a Chinese lab… to do gain of function experiments… At the base of this is why is the US funding a lab in a country where we have a 600 billion dollar trade deficit? Then it extends to the cover up that Daszak led with Fauci’s support to call the virus zoological. So the two could cover their asses as they knew damn well what they were funding in China. Oh right it’s zoological. NO MERS or SARs before Covid 19 had ever emerged to being human to human transmittable. But when you are messing around with the cleavage sites for spike proteins…in the lab… GEEZ whiz… could Fauci have funded the pandemic? AND
NOTHING IS GOING TO HAPPEN to him. Even though he violated the NIH policy of reviewing riskier grants… Wuhan was exempt from that review.

But soon TBE’s trolls will be here to tell you about how the rednecks aren’t getting vaxed… Right boys they aren’t. Do you trust a government that funded the thing that you are supposed to be afraid of?