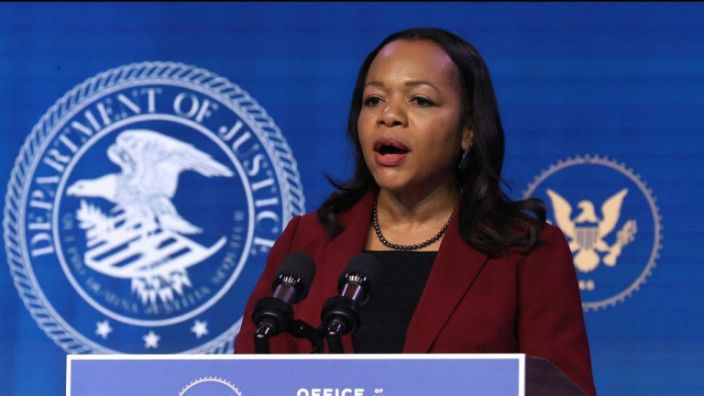 President Biden has nominated lawyer Kristen Clarke to be Assistant Attorney General for Civil Rights. Clarke has said that blacks are genetically superior to whites. â€œMelanin endows blacks with greater mental, physical and spiritual abilities,â€ while â€œmost whites are unable to produce melanin because their pineal glands are often calcified or non-functioning,â€ wrote Clarke in the Harvard Crimson newspaper in 1994. If Clarke still believes blacks are superior to whites, and is involved in formulating the Biden administrationâ€™s affirmative-action policies, her racist views may affect their legality, by tainting their motivation.

On January 10, Biden said his administration will give â€œpriorityâ€ to â€œBlack, Latino, Asian and Native American-ownedâ€ businesses. Bidenâ€™s racial-equity plan calls for a major expansion of affirmative action, and more race-based federal spending.

That is presumptively unconstitutional: The Supreme Court has said that giving priority to particular racial groups should be done only as a â€œlast resort,â€ and thus is subject to â€œstrict scrutinyâ€ by the courts. Strict scrutiny means the government must show that using race is a necessary and narrowly-tailored way to achieve  a â€œcompelling government interest.â€ Just remedying societal discrimination against black people is not reason enough to give them a racial preference. Instead, the government must generally show that a racial preference is necessary to remedy the governmentâ€˜s own recent, systemic, intentional discrimination, or a prima facie case of such discrimination. (See Richmond v. J.A. Croson Co. (1989); Hammon v. Barry (1987); Builders Association v. Chicago (2001); Middleton v. Flint (1996)).Such discrimination generally does not exist at federal agencies. Moreover, Biden cannot give a preference to all racial minorities, just because some racial minority groups may have experienced discrimination. (See L. Feriozzi Concrete Co. v. CRDA (2001)).

But even if such discrimination did exist, the government still canâ€™t use race if its motive for doing so is racist, rather than to remedy its own past wrongs. An improper motive for using race taints an otherwise valid affirmative-action program, under Supreme Court decisions like Shaw v. Hunt. Remedying governmental discrimination must be the governmentâ€™s â€œactual purposeâ€ for using race, and the governmentâ€™s use of race is thus illegal if another motive â€œactually precipitate[d] the use of race.â€ (See Shaw v. Hunt (1996)).

So if Clarke signs off on federal affirmative action programs out of a belief in black superiority, that may render those affirmative-action programs unconstitutional, even if there actually were evidence of recent, systemic, intentional discrimination by the government against black people.

While Clarke has expressed racist views against white people, some of the policies she has espoused could harm black people, too. For example, Clarke advocates defunding the police. Last year, in Newsweek, Clarke wrote three times, â€œWe must invest less in police.â€

That would result in more violent crime and killings. America already spends a smaller share of its economy on the police than the European Union does. Europe has a lower murder rate â€” and fewer police killings. A larger police force deters crime by catching a higher percentage of criminals, and thus increasing the probability of punishment. An overstretched police department is less knowledgeable about the community it serves, and more likely to use force unnecessarily.

By increasing the murder rate, defunding the police will harm minorities most, because they are disproportionately the victims of homicide. In 2019, about half of all homicide victims in America were Black, even though only 13% of Americans are Black.