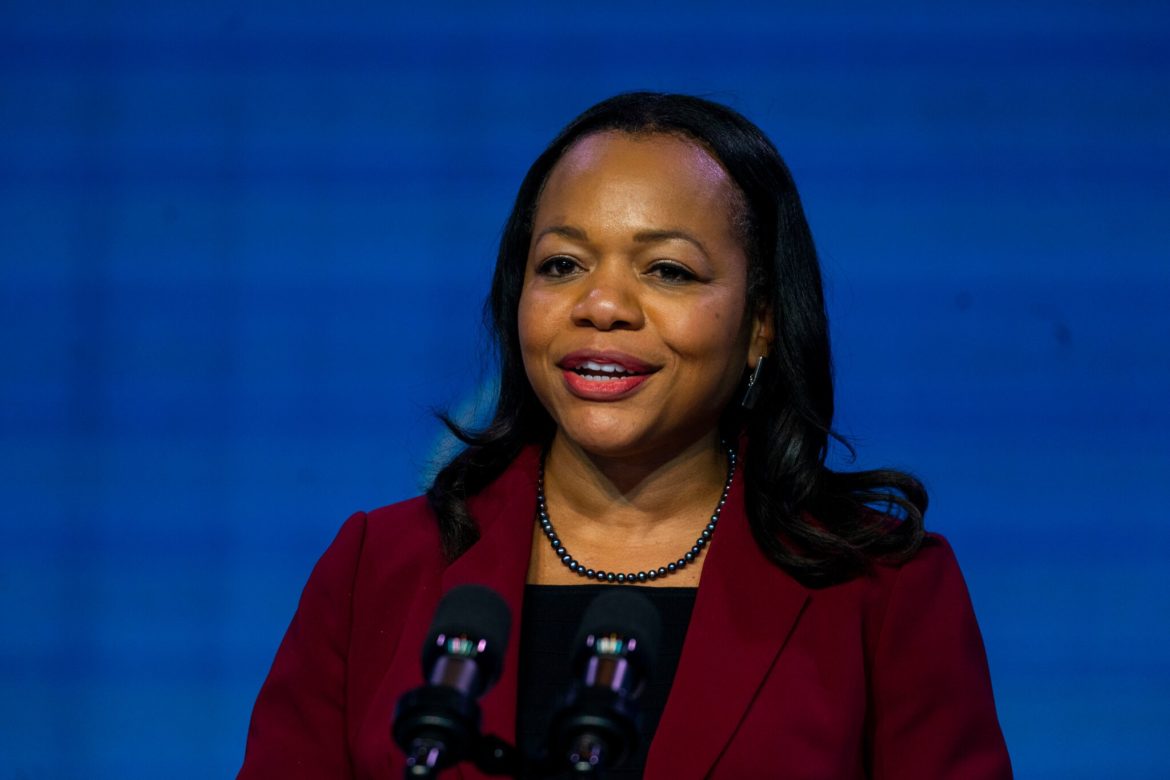 President Biden nominated lawyer Kristen Clarke to run the Justice Department’s Civil Rights Division, even though she once said that whites are inferior to blacks, and she has long opposed civil rights for white victims of racial discrimination.

“Melanin endows blacks with greater mental, physical and spiritual abilities,” while “most whites are unable to produce melanin because their pineal glands are often calcified or non-functioning,” wrote Clarke in the Harvard Crimson newspaper in 1994.

Clarke now claims her anti-white statements were satirical, in contrast to the past, when she stood by them. But they occurred in a serious discussion, and she made these statements at a place and time where even shocking racial claims about whites were made in all seriousness.

Clarke and I both attended the same school, Harvard University. There, I encountered black students who believed crackpot racial theories that echoed Clarke’s statements (such as the idea that blacks are, by nature, warm, communal, spiritual people, unlike whites, who are coldhearted oppressors). These bizarre racial claims were made without any hint of humor or irony. The black secretary of the Harvard Law School student government told me in all sincerity that his kids would fight mine in a race war some day. And I had thought he was my friend!

I don’t believe Kristen Clarke, because she is a blatant liar. In the same April 14 hearing where she claimed her racist remarks were made in jest, she also denied having supported defunding the police, in an article in which she stated three times, “We must invest less in police.”

As the Washington Times notes,

During a contentious confirmation hearing before the Senate Judiciary Committee, Republicans grilled Ms. Clarke about a piece she authored for Newsweek in June. The article was headlined: “I Prosecuted Police Killings. Defund the Police — But Be Strategic.”…

“Do you disagree with your article?” asked Sen. Ted Cruz, Texas Republican.

Ms. Clarke insisted that the headline does “not align well with the piece” and said she authored it to “make clear” her opposition to defunding the police.

Republicans said the op-ed explicitly endorses defunding the police, reading excerpts from it throughout the hearing.

Three paragraphs from the piece begin with “We must invest less in police.”

Republican Senators also quoted where Clarke had written, “I advocate for defunding policing operations that have…contributed to mass incarceration.” Given Clarke’s explicit advocacy of “defunding” the police and investing “less” in them, her denial of having done so was not credible. She was lying through her teeth. Her lie was as obvious as that of the man caught committing adultery, who tells his wife, “who are you going to believe? Me or your lying eyes?”

But as the Washington Free Beacon notes:

The most bald-faced of the lies Kristen Clarke offered in her own defense relates to her activism while a Harvard University undergraduate in the 1990s.

Pressed about a 1994 letter published in the Harvard Crimson making the case that blacks are intellectually and physically superior to whites, Clarke waved it off as a “satirical” attempt to refute The Bell Curve…Everybody knew she was joking, she said, when she…pointed to the work of the writer Carol Barnes to assert that “human mental processes are controlled by melanin—that same chemical which gives Blacks their superior physical and mental abilities.”…

In Wednesday’s hearing, Clarke assured lawmakers that “contemporaneous reporting by the campus paper made very clear” she harbored no racist views.

False. The editors of the Crimson called on her to retract her claims. In an editorial titled, “Clarke Should Retract Statements,” they wrote: “We searched in vain for a hint of irony in Clarke’s letter.” She had, they concluded, “resorted to bigotry, pure and simple.”

Indeed, “even her defenders” didn’t claim it was a “joke.” As liberal Newsweek notes, despite “Clarke’s recent assertions that her 1994” article was satirical, she did not convey that it was “not serious at the time.”

Moreover, this wasn’t the only racist incident Clarke was involved in. As the Free Beacon notes, Clarke invited to Harvard a man who was deadly serious about his racism and anti-semitism: “indeed Clarke invited the racist black ‘scholar’ Tony Martin to Harvard’s campus to discuss his book The Jewish Onslaught—another move the Crimson condemned.”

As the National Review notes,

shortly after her Harvard Crimson piece, Clarke invited the anti-Semitic writer Tony Martin, author of The Jewish Onslaught, to speak on campus. Under fire for the invitation, she dug in and praised Martin as someone “who bases his information [on] indisputable fact.” After she was recently announced as Biden’s nominee, Clarke admitted that the invitation to Martin was a mistake. But she would not walk back her signing of a letter in 2019 supporting Tamika Mallory, a Women’s March co-founder who, according to an investigation by Tablet, “asserted that Jewish people bore a special collective responsibility as exploiters of black and brown people.

Far from being satirical, Clarke’s racial prejudice was real and long-lasting. It infected her life’s work as a “civil rights” activist. In 2008, as a prominent lawyer, Clarke attacked the Civil Rights Division’s decision to sue Ike Brown, a black political boss in Mississippi, for blatantly discriminating against white voters. Clarke reportedly did not believe civil-rights laws should be used to protect white victims of discrimination.

As Quin Hillyer notes in the Washington Examiner, Clarke “blasted” the Justice Department “for pressing a case against a man named Ike Brown, who ran a black political machine in Mississippi’s Noxubee County that was notorious for its hardball tactics and racial animus toward white people. Even after Brown was caught and found liable in U.S. District Court for multitudinous, fraudulent voting-related practices that were flagrant violations of the Voting Rights Act, Clarke argued that the case should never have been filed.”What is most disturbing about Clarke’s position is that it flouts court rulings saying white people are, indeed, protected by the civil-rights laws. The Supreme Court ruled that voting-rights provisions protect people of all races, not just minorities, in Rice v. Cayetano (2000).  In 1976, the Supreme Court unanimously ruled that it’s illegal to fire white people because they are white. Racially harassing people because they are white is also illegal. But Clarke simply refused to accept the fact that whites, like other people, have civil rights.
Clarke has supported college admissions policies that discriminate against Asians and whites.

Clarke was also deceptive about other things in her record. As the National Review notes, at the Senate hearing on her nomination, she misleadingly “downplayed her role as merely ‘a student providing support’ for a conference … at which speakers repeatedly referred to an array of … convicts, including several convicted cop-killers, as ‘political prisoners.’ The transcript of the event referred to her several times as an organizer, with speakers thanking her for her work.”