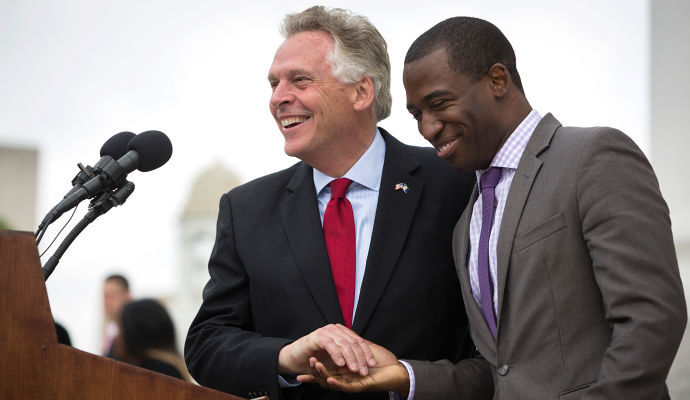 After withdrawing from the 2009 and 2013 gubernatorial races rather than face his opponent for the nomination in a convention, former Lieutenant Governor Bill Bolling declared that the Republican Party had become too conservative.

It’s just a challenging time for the Republican Party when a conservative, mainstream guy like me doesn’t really feel comfortable with his party,” Bolling said. “The party has moved too far, and it’s become too extreme and too ideological.”

The man who was known as the “Hanover Hun” for his conservative voting record in the Virginia Senate (a record nearly identical to that of his 2013 rival, Ken Cuccinelli), then said he didn’t really mean all those conservative things he’d previously stood for.

[His departure from the race] left him in a unique position, rare among politicians, to say what he really thinks.

It’s worth pointing out that this is exactly how conventions are useful as nomination tools, empowering high-information voters to weed out the disingenuous candidates who only say what they think you want to hear.  Bolling went on to flirt with the prospect of running as an independent against Cuccinelli, and generally to undermine the Cuccinelli campaign in subtle and not-so-subtle ways.

Earlier this year Bolling wrote that he’s still the same conservative he’s always been, and that it’s the GOP who has left him, not the other way around, criticizing the party for becoming too focused on “rigid ideological purity” at the expense of winning elections:

Unfortunately, there are many in the Republican Party today who would rather lose elections and maintain a sense of rigid ideological purity than win elections and actually have a chance to accomplish something meaningful. I have no time for that.

This sense that Bolling cares deeply about Republicans winning elections makes his most recent political activity appear rather curious.  You see, his PAC just donated $2500 to the campaign of Levar Stoney.

So who is Levar Stoney?  He is a protege of Governor Terry McAuliffe, and a politico who first came to notoriety for lying to investigators about an incident in Wisconsin in 2004 in which Democrat operatives slashed the tires of vans hired by the Republican Party to drive voters to the polls.  During the trial, he told jurors that he one day wanted to be elected to the U.S. Senate.

Later, Stoney worked for various Virginia Democrats, and then took a job at Terry McAuliffe’s crony capitalist boondoggle, Greentech.  From there he became deputy campaign manager for McAuliffe’s gubernatorial campaign, from which he transitioned to become Secretary of the Commonwealth in McAuliffe’s administration.  He’s now running for Mayor of Richmond.

Richmond’s mayoral election is this November, at the same time McAuliffe’s number one priority, Hillary Clinton, is on the ballot statewide.  Democrats are expected to formally endorse Stoney, who has been raising boatloads of cash from McAuliffe’s fundraising network (hence all of the donations from outside Richmond, and indeed outside Virginia).

Why is Stoney so important to the Democrats?  Well, as an African-American who is closely affiliated with the Clinton network, Democrats are counting on a well-funded Stoney being able to generate a historic African-American turnout in Richmond to assist Hillary’s efforts statewide, offsetting her huge negatives among the demographic groups dominant elsewhere in the state.

If driving up turnout for Hillary Clinton and installing a McAuliffe lackey as Mayor of Richmond are the kind of results he’s looking for, count me out.  I’ll stick to being one of those so-called “extreme voices” Bolling excoriates for having the temerity to actually believe in the conservative principles we work to promote.

Sounds like Bolling has other cool things to do.

The Uniparty is alive and well.

I’m firmly convinced you could spin a multi-car pileup on I95 right outside Richmond as yet another clear example on why for Virginia conventions are the only sane political nominating process. Really, you appear to have a real talent in this area.. One slight word of caution for those constantly beating this drum though, when you use words like “empowering high-information voters to weed out the disingenuous candidates” to describe the enlightened few, a Democrat or other for that matter, might well refer to this type of electorate stereotyping as a “dog whistle”.

We the party ordained vs you the low information voters (perhaps not too bright as well?). While Bill Bolling may be yesterday’s news maybe his ” rigid ideological purity” comment is not totally unworthy of consideration. Interesting that we recently heard Ken Cuccinelli also proclaim this barbarians at the party walls belief regarding Virginian conservatism. I doubt 2,500 bucks is going to swing a Hillary Clinton Virginia win, but that’s not what this is about is it.

So is this the “new conservatism” that you keep talking about that we are supposed to embrace? Support open primaries so Independents and Democrats can vote for left leaning candidates who pay lip service to social issues and pretend to support fiscal conservatism? How is that different than what Bill Bolling and the other establishment types are giving us now?

No it it not but I would happy to lay out my opinions on what it should be if given the correct forum. Regardless, it certainly doesn’t begin or end with sarcasm.

Who is the Republican in the race?

This is what we get with Establishment Republicans. Bill Bolling may be a little more overt in his treasonous behavior than most RINOs, usually it takes the form of crony capitalism, reaching across the isle by our elected officials after campaigning and winning as Conservatives, or officials like Senator Collins, McCain, etc. that expect us to hold our nose and vote for the next duplicitous RINO, whose turn it is to run for office.

Bill Bolling is so yesterday. He masks his unwillingness to compete in the Republican arena with vague charges that the rest of us are “too extreme and too ideological.” What does that mean? Is fiscal responsibility too extreme? Is Constitutionally limited government too extreme? I will never forget Bolling’s treasonous efforts to torpedo the Virginia Republican ticket in 2013. Be gone Bill Bolling.

Anybody expect anything different?

Bill Bolling has been bawling and calling fowl for years, and I would not consider him a member of the Republican Party if he chooses to support McAuliffe Democrats. The Grande Ole Party can do well without his endeavors and his dollars.