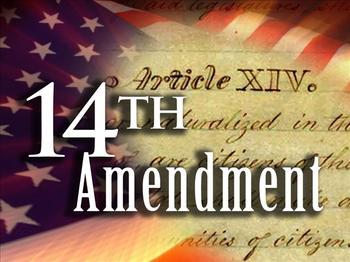 Birthright citizenship is NOT guaranteed by the Constitution

That amendment does indeed form the basis for the granting of such citizenship, but its scope is subject to Congressional interpretation.

Here’s how it reads, in pertinent part:

Section 1.
All persons born or naturalized in the United States, and subject to the jurisdiction thereof, are citizens of the United States and of the state wherein they reside. No state shall make or enforce any law which shall abridge the privileges or immunities of citizens of the United States; nor shall any state deprive any person of life, liberty, or property, without due process of law; nor deny to any person within its jurisdiction the equal protection of the laws.
…
Section 5.
The Congress shall have power to enforce, by appropriate legislation, the provisions of this article.

Some observers and commentators have said, in essence, that if you’re in the physical territory of the United States that you are subject to the jurisdiction of the United States. That is certainly how the 14th Amendment has been applied for most of the last century, but that’s by choice, not because it is a Constitutional requirement.

“Now, all that this amendment provides is, that all persons born in the United States and not subject to some foreign Power…shall be considered as citizens of the United States.— Sen. Reverdy Johnson (D-Md.), speaking on passage of the amendment in 1866

When the 14th Amendment was passed it was understood that “subject to the jurisdiction thereof” was meant to exclude those who were not fully within the political jurisdiction of this country. In fact, by operation of the laws passed by Congress pursuant to Section 5 of the 14th Amendment (principally the Civil Rights Act of 1866), Native Americans born within the United States were not guaranteed citizenship given their native allegiance to a separate sovereign (their respective tribes). It was not until 1923 that all Native Americans became entitled to U.S. citizenship just because they were born within our borders. Under the 1866 law, not only were Native Americans excluded from the definition of what it means to be “subject to the jurisdiction” of the United States, so were those persons “subject to any foreign power.”

This application is supported by the first judicial interpretations of the “subject to the jurisdiction thereof” clause of the 14th Amendment. In 1873, the Supreme Court gave its first take on this language:

The phrase, ‘subject to its jurisdiction’ was intended to exclude from its operation children of ministers, consuls, and citizens or subjects of foreign States born within the United States.— Slaughter-House Cases, 83 U.S. 36, 73 (1873)(emphasis added).

Open borders advocates tend to cite an 1898 Supreme Court case, United States v. Wong Kim Ark, as standing for the proposition that anyone born within U.S. borders is automatically a citizen. The problem with this is that it’s not the holding in Wong Kim, which only decided whether the child of a legal permanent resident of the United States should be considered a citizen. Moreover, to reach the conclusion desired by the open borders crowd, one has to read “subject to the jurisdiction thereof” clause out of existence. There are two citizenship requirements in the 14th Amendment: (a) that a person be born here, and (b) that they be subject to the jurisdiction of the United States. Saying that only (a) matters—that anyone born here is automatically subject to U.S. jurisdiction—is to say that (b) has no meaning when it clearly does, and has in the past facilitated meaningful limits on application of birthright citizenship.

There are lots of people who want you to believe (either because it’s easier that way for them politically, or because they’re honestly mistaken) that Section 5 of the 14th Amendment does not allow us to end to automatic birthright citizenship, and that to have a reasonable discussion on the subject is impossible because “Racist!”

Within our own party, there are folks who want to drive out anyone who thinks birthright citizenship is capable of reform, or even that reform might be needed. They’ll need some boxcars for that operation, I think, because there are an awful lot of people who, for instance, back presidential candidates who favor at least some kind of limitation on automatic birthright citizenship (at least 10 of the 17 Republican candidates, accounting for over 2/3rds of voters’ expressed candidate preferences).

That is, frankly, PC nonsense (see also, e.g., the grief Jeb Bush has gotten for using the term “anchor baby“). We have an immigration crisis facing us today precisely because such arguments attempting to delegitimize honest debate have been successfully deployed for decades, by leaders in both parties. Advocates for a sane and rational immigration system that makes sense for America cannot continue to allow themselves to be drowned out of the debate. As I’ve previously written, when the grievance mongers silence reasonable debate, all we’re left with are people who don’t approach the issue reasonably.

Personally, I’d rather prioritize enforcement of existing laws over fighting for new ones addressing birthright citizenship. But, unlike some, I’m open to arguments to the contrary.