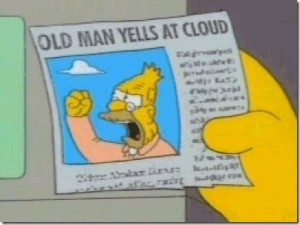 Apparently for no reason whatsoever, a long-shot candidate for the GOP nomination to replace Congressman Gerry Connolly (D-11) lashes at at Senate candidate Shak Hill and his staffers.

In an unbelievably bizarre blast email this morning, Republican Congressional candidate Gerald Geddes unleashed some vitriol at Shak Hill and two senior members of his campaign team. Without explaining himself, or offering any sense as to why a Congressional candidate in the 11th district would feel the need to say ANYTHING AT ALL about a Senate candidate who is not an opponent, Geddes says he wants to “kick his skinny butt all over VAs 11th district.”

The full text of the email is below. Somebody needs to get this guys some psychological help.

An open letter to Shak Hill, Steve Thomas and Chris Farmer:
If Shak joins my race I will kick his skinny butt all over VAs 11th district.
I’ll enjoy knocking Shak’s soft teeth down his whining throat.

Mr. Hill I seriously want you to compete for the 11th Congressional district, I assure you that the winner will go on to defeat Gerry Connolly.

Win or lose I will work tirelessly for the Republican nominee of the 11th district and our nominee for the US Senate.

[…] to say expansion was mandatory (which gave him cover to do what he wanted to do), that he earned a PolitiFact "Pants on Fire" rating on the […]

I’ve met Geddes. His deck has somewhat fewer than 52 cards in it, so I wouldn’t take him too seriously.

I laughed at this really, really hard. In all the emails I have ever gotten from Geddes and from the few speeches I have heard him give, I don’t think I have heard or read ONE coherent statement from Geddes.

This email makes absolutely NO sense whatsoever. Unless Shak is somehow considering droping his Senate bid and running for the House this email is just a pointless, irrelevant attack. I’m not sure, but I think Shak lives in the 10th and the filing deadline in the 11th is over, so I don’t think Shak could even run in the 11th(someone please correct me if I am wrong).

I guess Geddes is probably doing this for attention or he is trying to top Wasinger in this year’s Virginia Congressional Candidate Idiot of the Year Award.

Shak is in the tenth. Although there are no residency requirements for getting one’s “soft teeth [knocked] down [one’s] whining throat” other than to be a Virginia resident running against Geddes.

So let me get this right, Geddes wants someone who doesn’t live in his district and is in another race to run against him in the 11th? Makes perfect sense!

The Congressional races are getting interesting. Insults such as “raging bitch” being thrown out, sock puppets, faux outrage, people picking fights with Senate candidates. What a circus.

Good point Ryan! I think the 2014 VA races have become a three-ring circus, with a clown posse like no other I have ever seen at any of the nationally recognized companies such as the Ringling Bros. or the Big Apple Circus…

I must say Lamb Chops has to up his ante. I am still trying to recover from the utter shock and disbelief of both of the e-mails sent out this morning by Geddes, the second one doubling-down. Sock puppet alert: the limelight has been stolen from you!!!!

[…] Meet Gerald Geddes. He’s running for the unique pleasure of losing against Gerry Connelly in Virginia’s 11th District. We’d link to his website but his domain appears to have expired yesterday. […]

[…] Steve Albertson says that Geddes needs psychological help. I think, in my non-medical opinion, that that’s a good […]