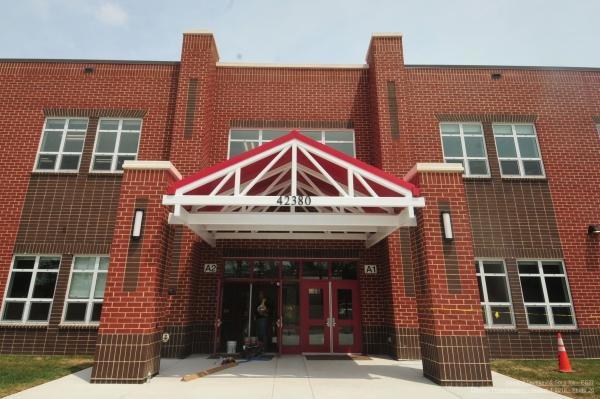 Recently Madison Trust Elementary school in Loudoun County was in the news when a PE teacher presented an obstacle course for the students and used it to discuss the obstacles slaves had to endure on the Underground Railroad as they tried to get to freedom.  The Principal, Dave Stewart, has apologized for the insensitivity of the exercise.  That story here.

This morning two black vans, with darkened windows, pulled up to the school, ran over safety cones, and unloaded a large group of Black Panthers. Children were arriving and the seven or eight Panthers simply followed the students into the school.   The Black Panthers were dressed in all black, stormed the principal’s office, brandishing large sticks as weapons, yelling and threatening Principal Dave Stewart.  The Panthers filmed the incident. The Sheriff’s office was called and 15 deputies, in marked and unmarked cars, arrived on the scene.  At this time it is not known if the deputies arrived before or after the Panthers left the scene.

In this incident safety protocols were not followed, the school was not put on lockdown, and parents were not notified of the incident. The staff and teachers were aware of the incident and frightened by it,  while it was downplayed by the principal, Dave Stewart, who called for a meeting with the teachers at 3:00 pm today. Staff at the school remained very concerned for their safety.

This incident shows once again why we need armed School Resource Officers in every school.  Candidate for Chairman of the Board, John Whitbeck, has been very vocal about this need to protect our students.  When contacted Whitbeck said,

“The safety of our children in our schools is of paramount importance.  The fact that any of these events occurred in our schools is outrageous and inconsistent with the mission of public education.  It further underscores the desperate need for us to expand our nationally recognized  School Resource Officer Program to every school in Loudoun County.”

More news on the incident when it becomes available.  We are awaiting the Sheriff’s report on the incident. As of 4:00 pm today they have not responded to our request for a report.

UPDATE:  We have heard from the Sheriff’s office, they said,

The Loudoun County Sheriff’s Office was called to Madison’s Trust Elementary School around 9:55 a.m. on March 1, 2019, after a school employee called 911 regarding subjects who were possibly being disorderly inside the school. Upon arrival, deputies found the situation to be peaceful and the group was leaving the school.  The situation at this time appears to have been a peaceful protest regarding recent events in the news surrounding the school. As indicated in a previous release by school officials today, there was no threat to the school.

Please note what this says and what it doesn’t say.  It doesn’t say who these ‘peaceful protestors’ were or why they were inside the school.  Is it at all surprising that the group left when many deputies descended on the school?  How did a group of 6 to 8 men walk into the school with our young students and make it to the Principal’s office?  Why did the Principal not turn them away and have them removed from the school?  Were they members of the Black Panthers as reported by teachers and staff in the school?

The Sheriff’s office and Loudoun County Public schools claim no one in the school were frightened or in danger.  That simply is not true.  The staff person who called 911 was fearful as were other teachers and staff in the school.  One teacher was frantically trying to lock all the doors to the school because of her terror.  How does the school system know no one was in danger?  Do they know these men were unarmed?  Do they know the intentions of this group of men?  Six or eight men dressed in all black, brandishing canes, clearly entered the school with the goal of intimidation.  They did not come to the school to stage a ‘peaceful protest’ in the principal’s office. That doesn’t even pass the laugh test.

Was protocol followed at the Madison Trust?  Can any group of men enter our schools, behind our students, and march into the Principal’s office for any reason they choose?  That’s nothing short of very dangerous for everyone in our schools.  Any group entering our schools without identification could be there to harm our students and teachers.  This is simply not acceptable.

I have not seen the release from the Loudoun Public Schools about this incident but not for lack of trying.  I will continue to search for it and post when I find it.

Second Update from the sheriff’s office:

The LCSO was called to the school around 9:55 a.m. on March 1, 2019, after a school employee called 911 regarding subjects who were possibly being disorderly inside the office of the school.

It was reported by school officials that the group entered the school’s vestibule by following a parent and student who were cleared to enter the school by staff through the electronic door access. The group continued into the office and some members showed identification and asked to speak with a school administrator to discuss how recent events in the news surrounding the school were being addressed. After being advised by a school administrator he could not discuss personnel matters, the group left the office with some members loudly saying ‘no justice, no peace’.

Upon arrival, deputies found the situation to be calm and observed a group of six people uniformly dressed in all black exiting the school. They were compliant with the responding deputies and one of the members self-identified the group as members of a Black Panther Party.

The situation at this time appears to have been a protest, and no threats were made towards the school or the school staff. As a precaution, an LCSO School Resource Officer remained on campus for the rest of the school day.

In light of today’s breach of visitor access, the Loudoun County Sheriff’s Office is reviewing the circumstances surrounding the group entering the school’s vestibule and office and will continue to work with school administrators and security staff regarding access to schools to identify any potential areas of concern, including strict visitor controls.

It’s good to know they are finally taking this seriously and taking some actions to protect our children in their schools.