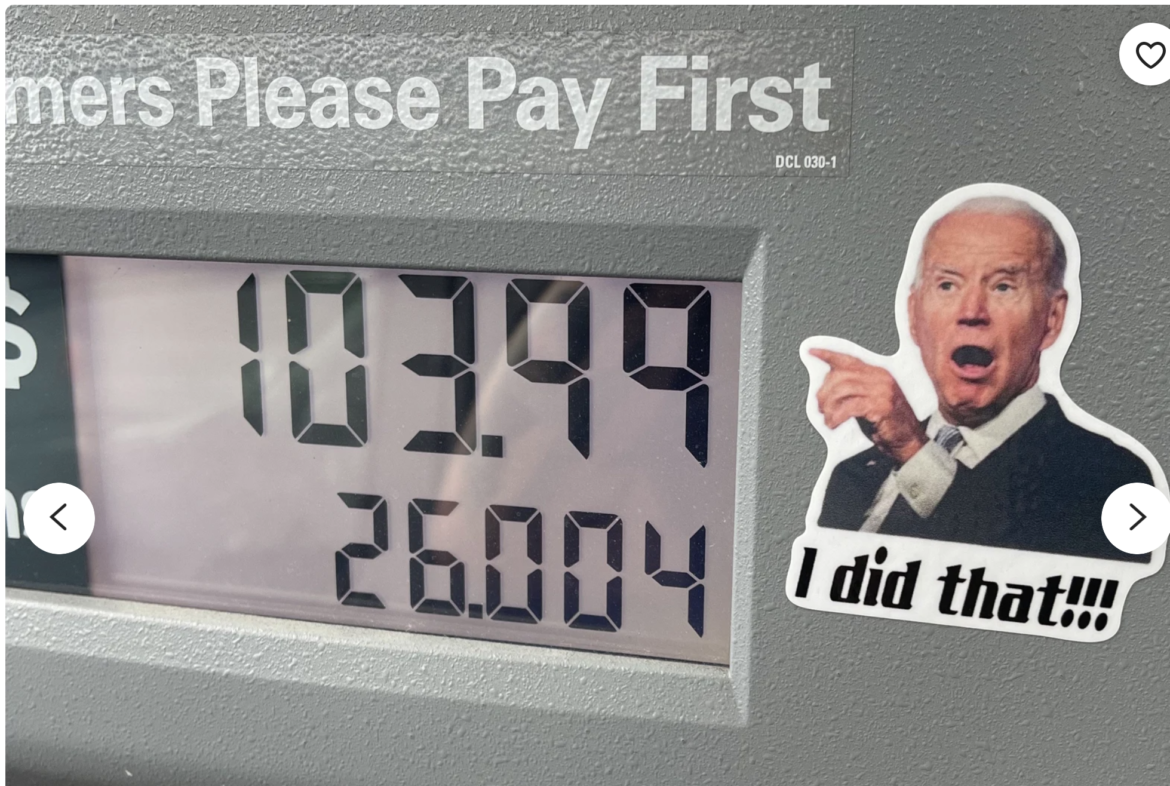 “Blame Biden for high gas prices, the president is running from his own hefty contributions to record gas prices and inflation,” says Reason Magazine:

>>>when it comes to energy specifically, the Biden administration has pursued a number of policies designed to make it more expensive to produce fossil-fuel energy in an effort to reach a goal of net-zero carbon emissions by 2050. In fact, environmentalists cheered Biden’s bold moves just a week into his presidency as “the most remarkable day in the history of America’s official response to the climate crisis.” As Bill McKibben wrote in The New Yorker, Biden’s actions marked “the official beginning of the end of the fossil-fuel era.”

The president’s measures have included halting new permits for drilling and leases on federal lands, shutting down the planned Keystone XL pipeline, and proposing the end of tax credits for new drilling and exploration projects. He’s been joined by congressional Democrats who have been working to tighten regulations loosened during the Trump years and otherwise clamp down on oil producers. At the state level, ousted Democratic Gov. Andrew Cuomo banned fracking in New York in 2014 and California has effectively stopped the practice in anticipation of a 2024 ban.

Even when such moves have been overturned by courts or only affect future operations, Biden and the Democrats have sent a loud and clear signal that the future will be green, even if renewable sources aren’t up to the task of supplying our energy needs. Currently, less than 13 percent of our energy comes from renewable sources and even as wind, solar, hydroelectric, and other sustainable sources get cheaper and more reliable, we’re a long way from independence on fossil fuels.<<<

President Biden is backing a big across-the-board increase in federal spending that will increase inflation (and prices) even further. “Economists agree Biden’s spending bill” will “exacerbate inflation,” reported Fox News in November. But Biden ignored the warnings from economists, spending trillions. That resulted in inflation reaching a four-decade high under Biden, and wholesale price inflation reached double digits by this February.

Biden wants to spend even more than big-spending Congressional leaders. Last May, Biden proposed a record $6 trillion budget that “would push federal spending to its highest sustained levels since World War II” as a share of our economy, reported the New York Times. It would have made the national debt skyrocket even faster, and resulted in even larger, persistently huge budget deficits. The Biden administration itself forecasted budget “deficits at more than $1 trillion for at least the next decade” if his budget plan were adopted, noted CNN.

While suppressing oil production at home, Biden is wooing foreign dictators in hopes they will sell the U.S. more oil. As Hot Air noted:

>>>If the Joe Biden administration has any strategy at all on energy, it appears to be of the rotating-despot variety. It seems Biden would desperately like any country other than his own to step up its production. That desperation has led the White House to send envoys to Nicolas Maduro, hoping to convince the Venezuelan tyrant to turn on the Russian tyrant to get more of the dirtiest oil available:

“A group of senior U.S. officials flew to Venezuela on Saturday for a meeting with President Nicolás Maduro’s government to discuss the possibility of easing sanctions on Venezuelan oil exports as the Biden administration weighs a ban on imports of Russian oil and gas, according to two people familiar with the situation….Venezuela, the Kremlin’s most important ally in South America, used to be a significant supplier of crude to the United States before exports were hobbled by domestic mismanagement and crippling sanctions from Washington.”

This is quite a change in American policy toward Maduro, who violently suppressed an uprising in the national assembly and has oppressed dissent for years in a starving Venezuela. Not only is he the same kind of tyrant as Putin (only less effective), Maduro is still holding a half-dozen American oil executives on bogus corruption charges. The Citgo Six got lured to Venezuela in 2017 and have been captives of Maduro ever since….

Maduro’s reward for keeping the men in prison will apparently be a new agreement to sell the US enough oil to keep prices down at the pump. Let’s not forget, by the way, that Venezuelan oil is particularly hard to refine thanks to its level of impurities, which means it will be even worse on the environment than the oil we pump in North America — worse even than the supposedly over-bituminous oil from the Alberta sands that would have come to our refineries over the Keystone XL pipeline.<<<

Ok lets see we get rid of all oil what are they going drive those electric cars on gravel roads? What are they going to use for tires? I guess could use wood! 🙂 These people do not think things through Can’t wait until the Brown outs & black outs when the power companies can not generate enough power to charge all of those electric cars & truck! Don’t tell me Solar and Wind will take care of that! PS Most of the Solar & Wind Generators come from China!

Biden turbocharged the American kleptocracy. He is the most corrupt president we’ve ever had. Americans will literally pay for failed Democrat policies with higher prices for everything. And that is exactly what the Radical Left wants!