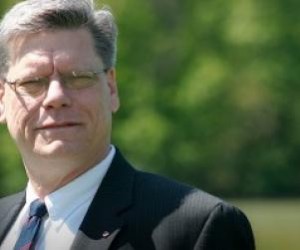 The Washington Post earlier this afternoon reported that embattled Republican Party of Virginia Treasurer Bob FitzSimmonds had offered his resignation after widespread criticism of remarks he made in a Facebook post.

FitzSimmonds spoke out against the President’s remarks about “the many achievements and contributions of Muslim Americans to building the very fabric of our nation and strengthening the core of our democracy,” when the President was marking Eid-al-Fitr, the feast day celebrating the end of the Muslim holy month of Ramadan. From the Post:

In response, FitzSimmonds wrote: “Exactly what part of our nation’s fabric was woven by Muslims?” he wrote. “What about Sikhs, Animists, and Jainists? Should we be thanking them too?”

The reaction to this comment was swift, with Democrats screeching about the intolerance and bigotry of the Republican Party of Virginia, and with embarrassed Republicans, including Speaker Bill Howell and Del. David Ramadan, calling for FitzSimmonds’ resignation from the GOP’s state central committee.

In an article posted this afternoon at 4:07 PM, Washington Post reporters Jenna Portnoy and Patricia Sullivan wrote that FitzSimmonds was poised to resign.

The treasurer of Virginia’s Republican Party has offered his resignation, two high-ranking party sources said, after questioning in a Facebook post whether Muslim Americans have contributed to U.S. society.

The Bull Elephant contacted FitzSimmonds seeking confirmation of this story. However, FitzSimmonds repudiated the story, and said that not only has he not offered his resignation, he has not even discussed the possibility with any party officials. “I have no plans to resign now or in the future,” FitzSimmonds told The Bull Elephant.

Readers of The Bull Elephant will remember FitzSimmonds as the central figure in Twaddlegate, another controversy involving a FitzSimmonds Facebook post. In that incident, FitzSimmonds plausibly claimed not to have intended to use a vulgarity in describing Del. Barbara Comstock.

In the current situation, however, the criticism against FitzSimmonds is more substantive than protesting an errant choice of diction. His post about Muslims and others in America have not been received well by the general public, nor by much of the GOP that has examined them. We will keep our readers informed of developments as this story unfolds.

Oh – if these Republican Party big wigs could be just as nasty to Democrats!

The main thing that bothers me about this whole fiasco is not the supposed insult to Muslims in Bob’s statement. What really bothers me is that Bob felt compelled to attack a completely innocuous and un-memorable press release. Who cares what Obama said marking the end of Ramadan? Really, who cares??? The President (and not just Obama, but ALL Presidents) releases statements like this during all kinds of religious holidays all the time. They are mealy-mouthed, throw-away statements designed to make sure people know that the President “cares” about their special day or religious holiday. In terms of policy or importance, these statements mean absolutely ZERO.

After his last Facebook fiasco you would have thought that Bob would have learned to count to 10 and re-read what he has written before hitting the “post” button, but I guess not. Now Bob has taken a non-issue (the President’s statement) and turned it into a colossal waste of time, not to mention playing into the stereotype’s the Democrats love to make about our party. Because Bob could not control himself to ignore this non-issue, we as a party are now dragged through the mud…again…..and forced to debate whether or not to remove him…..again.

Bob needs to remember that he holds a statewide position of importance in the party, and because of that, he is a public figure and needs to START ACTING LIKE IT! If he can’t learn how to pick your battles, or at least take a remedial course in public relations, he needs to step aside.

Steve: It looks like you (as a member of the State Central Committee) may be called on for a fire/keep decision on Fitzsimmonds. What’s your leaning on this vote?

Gee, I’m with Bob FitzSimmonds here. As a matter of fact he was quite eloquent and correct. I’m glad other people are calling out Obama’s overweening and OFFICIAL White House Press Release in praise of Muslim culture. I agree with Bob, Obama’s gushing statement is pure nonsense and I will go further and say it’s pandering – pure and simple. (It’s almost as bad as 4 years ago when Obama directed NASA to concentrate on making the “Muslim world feel good about their contributions to space and math”, instead of NASA’s previous mission of space exploration.)

Obama’s fulsome acclamation of the Muslims is especially preposterous when you consider that Obama has never said anything as remotely complimentary about other religions/cultures. Honestly, when’s the last time Obama proclaimed the virtues of the Jewish or Christian people – singling them out? I can’t remember him ever doing so.

When I think of people who have “built the fabric of our nation” our founding fathers come to my mind and I am grateful for them and their vision. I contrast that with Obama criticizing and complaining about these TRUE builders of the fabric of our nation on live TV (Feb. 6, 2012) “Our Founders designed a system that makes it more difficult to bring about change than I would like sometimes.”

President Obama made an official White House Press Release on this matter – speaking FOR America. As Americans every one of has a right to speak out on this and made our voices heard without the P.C. police jumping down our throats in an attempt to silence us. Neither Obama nor Muslims are untouchable here.

Maybe it makes some people uncomfortable when Obama’s marked and public preference for and allegiance to Muslims is pointed out. Tough.

Bob FitzSimmonds – please continue to hold fast and do NOT kowtow to the P.C. police in any way! You certainly owe no one an apology; on the contrary – many Americans feel your same and are glad you spoke up. Thank you.

The policy of “Diversity” requires that everyone get an “A,” notbent. “Achievements and contributions” are all relative. Getting up and going to work is as big an achievement as writing the Constitution or creating the atomic bomb. Maya Angelou is every bit the literary equal of Shakespeare. “Diversity” does not give 1st, 2nd or 3rd prizes.; everyone gets a blue ribbon.

Fitzsimmonds is right on the basic issue; I’ve no idea about the political wisdom of his statement.

If the State Central Committee chooses to address Fitzsimmonds’ statement, I hope they’ll kill two birds with one stone and address Shaun Kenny’s description of part of our base as bigots. Let’s do a thorough housecleaning if we do one at all.

I understand the optics are bad, and Fitzsimmonds showed poor judgement since he’s a party official, but can someone educate me on “the many achievements and contributions of Muslim Americans to building the very fabric of our nation and strengthening the core of our democracy,” I’m not familiar with this.

Well … there are Muslim doctors, teachers, IT professionals, car mechanics, daycare providers, government workers, husbands, fathers, mothers, daughters, friends, etc etc etc. You do know that “Muslim” doesn’t just mean a guy with a bomb on yelling “allah” right? It can also mean immigrants from Pakistan that come here to make a better life. It can mean Kurdish immigrants looking for freedom. Contributing to building the fabric of our nation is anyone who comes here and becomes part of our society and works hard at their craft, pays taxes, votes, and is a good citizen.

What bothers me is so many people seem unwilling to believe that Muslims can contribute to American society.

“Contributing to building the fabric of our nation is anyone who comes
here and becomes part of our society and works hard at their craft, pays
taxes, votes, and is a good citizen.”

Thanks for that, Chris, and having had many Muslim friends, I think I can place it into proper perspective.

That’s what my pug said too!

Time for Bob to use an alias.

“I have no plans to resign now or in the future,” FitzSimmonds told The Bull Elephant.

Then he should make plans…or have them made for him.

Wow! Eight guest votes for taking him out. I hope those voters know that according to RPV rules it is the firing squad which is blind folded not the target.

No rhetoric, just facts. How did muslims build the very fabric of America? And don’t say actual fabric. No levity.