With the Firehouse Primary 6 days away I’ve received so many mailers from the 6 candidates running for Congress in the 10th district that I considering using them to repaper a powder room in my house.  The best mailer has come from Delegate Bob Marshall.  On the front is a picture of Bob and his sweet wife of 38 years,  Cathy.  A wonderful  picture of a devoted and loving couple: 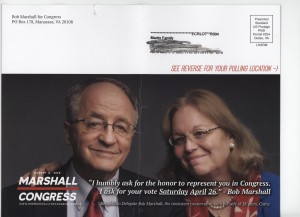 On the back of the flyer is a list of what Bob hopes to accomplish as a Congressman and another excellent picture of Bob.  (Whoever is doing his photography is a great photographer.)  The best part is  information for when and where the voter can cast their vote on Saturday, April 26th.  The voting location is specific to the voter’s address.  What a great idea!  This was the first mailer to link the voter’s address with their polling placce and it was done in a such professional manner, seamlessly.  That’s what makes this best mailer in the 10th district.  The mailer even has a little scissors line to cut the information part to take to the polls. 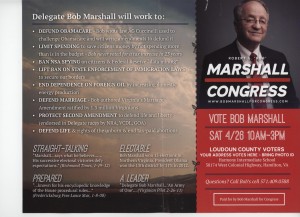