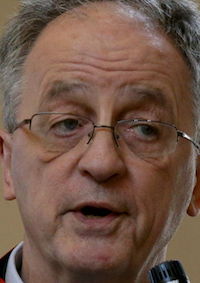 Del. Bob Marshall Enters 10th Congressional Race Constitutional Conservative with 22 Years of General Assembly Experience
“After prayerful consideration and a lot of positive outreach from family, friends, and supporters, I am hereby announcing that I am running for Congress in the 10th Congressional District of the Commonwealth of Virginia.”

Delegate Bob Marshall announced, “I believe I have a record that has served Virginians well, the ability to win in November, and the fortitude to make a difference in Washington in the years to come.”

Delegate Bob Marshall has won 12 general elections (and one primary election) to the Virginia General Assembly from Prince William and Loudoun counties and has fought for the people of Virginia, the Constitution, and our freedom. In 22 years of service, Marshall hasn’t voted for a single tax increase.

Marshall successfully sued Democrat Governor Tim Kaine in 2007 which blocked 14 unconstitutional taxes from crushing Virginia tax payers. He authored the Health Care Freedom Act to challenge Obamacare, wrote the Partial Birth Abortion ban law and the One-Man, One-Woman Constitutional Amendment which was overwhelmingly ratified by Virginians at the polls in 2006.

Marshall has secured support for his legislation from groups across the political spectrum to:
1. Protect personal data on driver’s licenses (HB 1587, 2009);
2. Prohibit Virginia from aiding the federal government in the arrest, detention without trial or legal counsel of individuals merely suspected of anti-government activities (HB 1160, 2012);
3. Require a search warrant for police monitoring live GPS tracking by cell phones, or other electronic devices (HB 17, 2014, passed House of Delegates).

Most recently, Marshall has taken on Democrat Attorney General Mark Herring, who has broken his oath to defend the laws of Virginia. Marshall recently secured signatures from 52 of his republican and democrat colleagues to ask Gov. McAuliffe to appoint legal counsel to defend the 2006 voter approved Marriage Amendment.

America is facing the most serious financial, moral and leadership crisis since our Civil War. Bob Marshall understands Congress and its rules of procedure, and (perhaps most importantly) he knows what it takes to move legislation, to achieve results, and to lead. Marshall pledged, “In Washington:
“I will not vote to increase taxes.
I will be on the front lines to defund and dismantle Obamacare to protect families, businesses, the economy and health care.
I will vote to block all new or expanded federal entitlement programs to reduce the federal debt.
I will oppose the creation or maintenance of a police surveillance state to spy on us, and will work to make federal agencies focus on terrorists, not citizens.
I will promote domestic energy production to free us from our current, unnecessary dependence on foreign oil.
I will be a tireless fighter for our constitutional rights including life, liberty, and private property.
I will oppose the executive assault on congressional powers.

“I know that our rights come from the hand of our Creator, that government receives its power from the people through their elected representatives, the purpose of government is to protect these rights, and government leaders must be servants, not masters.

“Experience shows that the means best able to secure these rights are the institutions of private property and limited government with elected officials who answer to and are held accountable to the public.”

Marshall has represented about one-third of the current 10th Congressional District at one time or another (Loudoun and Prince William). Most recently, he won a district that went for President Obama by a margin of 11.4%. He has a proven track record of winning elections in tough districts against well-funded opponents.

A Republican “Fire House Primary” will be held on Saturday, April 26 with ten polling locations throughout the 10th CD, run by the Republican Party, not the state.
See www.bob marshall.co.

Learn more about Del. Marshall at his website, here.

[…] Delegate Bob Marshall has won 12 general elections (and one primary election) to the Virginia General Assembly from Prince William and Loudoun counties and has fought for the people of Virginia, the Constitution, and our freedom. In 22 years of service, Marshall hasn’t voted for a single tax increase.  (continued here) […]

Stop giving this guy a pulpit to pontificate from…he’s as toxic for our brand as Todd Akin. This is a sure fire way to alienate independents in the 10th. Congrats.

Thanks! I’m reminded of how late Gov. Perry entered the 2012 presidential election and was wondering if you felt that Del. Marshall’s late entry would affect the viability of his campaign.

Colin, I don’t think his entry at this time harms his chances…there’s still plenty of time, and plenty of people who haven’t made up their minds. I plan to post a more extensive analysis on this and related questions tomorrow.