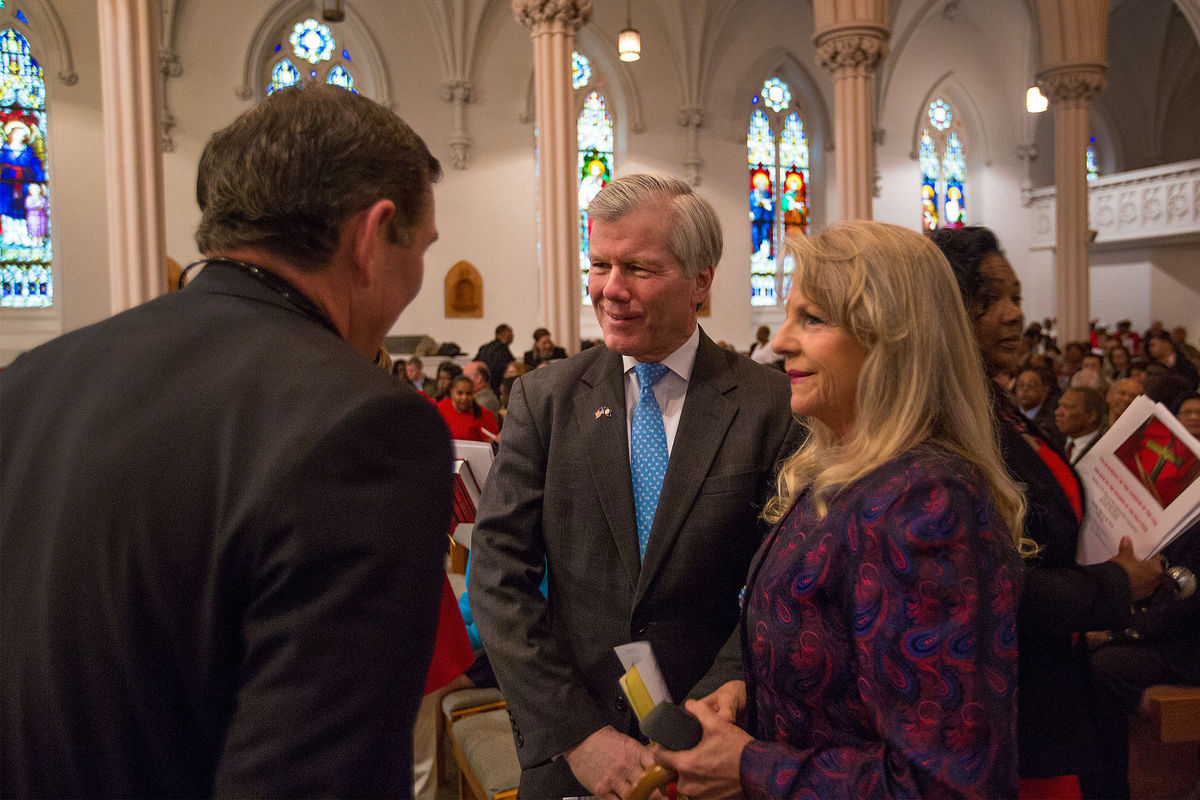 On Wednesday the Supreme Court will hear oral arguments in former Governor Bob McDonnell’s appeal of his conviction of accepting gifts in exchange for favors while in office.  The Supreme Court is expected to rule on McDonnell’s case in June.  He will learn then if he will spend two years in prison.

In the meantime, McDonnell has stayed busy with a new business, charity work, and attending church services with his wife.  Jeff McWaters, a former state Senator, hosts a prayer group several times a month which the former Governor attends.  He says McDonnell is optimistic about his future,

“This is a guy who’s just trying to get back to a normal life,” McWaters said. “His faith is so strong he’s really feeling like he will be vindicated. … He confidently anticipates that the Supreme Court will look at that mountain of legal thought and will vindicate him.

“However, I think he’s a realist. Bob knows that there’s a chance that that might not happen, and I think he accepts that.”

I’ve even heard him joke around and say, ‘Hey, I got through Army boot camp. I’ll get through this,’ ” McWaters said.

“He’s very aware that people are watching how he’s handling this.”

After McDonnell’s conviction he went to work in a friend’s company in Virginia Beach, Bay Mechanical Inc. While he still works for the company, in 2015 he opened his own consulting business with his sister Maureen. The McDonnell group does small business and corporate consulting.  Each week he reaches out to someone who is suffering in an effort to help others.

During the trial McDonnell and his wife Maureen were separated but it appears they have reconciled. The couple has been seen out together since June.  Maureen was also sentence to prison, for a year and day for her part in the Jonnie Williams saga of gifts and money for influence. Her case is also on appeal.

More on how McDonnell is spending his time here.

Still irritates me what McDonnell has gone through while Witch Hillary waltzes around cackling and coughing for POTUS. Slap on the wrist and let them go, far bigger and worse corruption to be dealt with.

And some conservatives joined in the schadenfreude as well

Bob McDonnell is a devout Catholic. I’ve known him for years since he was a Delegate from Virginia Beach. He and my good friend Bill Mims have been attending a prayer meeting weekly. He did not find religion because of his troubles. He is a good and decent man who would never knowingly break the law. I’m so happy to see that he and Maureen have apparently reconciled. They have wonderful kids who have supported them both through this whole ordeal. They deserve to be a happy family again. He’s already lost so much from this.

Most convicts find Jesus while they are in prison. Governor McDonnell has found Jesus before he has even served a day of his sentence. Quite admirable.

Governor McDonnell is a good man who did not surround himself with good people. Where were his advisors, his staff, his party when this was going down?

Good men make a point of surrounding themselves with other good men and women.

Kinda surprised to see that he’s reconciled with his wife. Being thrown under the bus in a criminal trial would seem to me to be the definition of “irreconcilable differences.”

For better or worse does include ‘cra cra’

Oh it was a kneecapping frequently deployed to take out good conservative Republicans. It’s what they do.

OK, as long as all are included