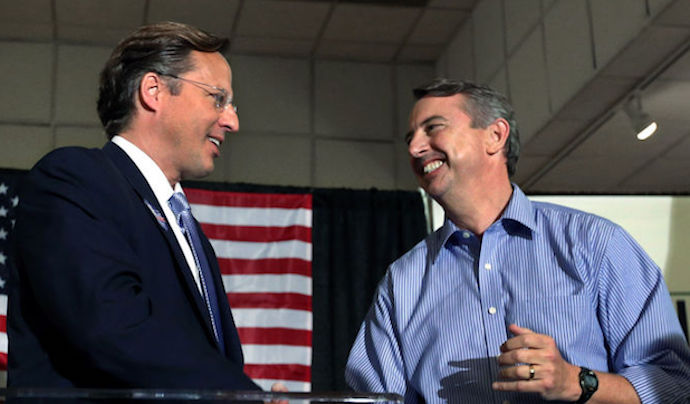 Few things in politics are more annoying than elected officials claiming credit for how many jobs they’ve “created.” Presidents, governors and members of Congress don’t create jobs, but they can enact policies that make it easier for the private sector to do so.

With a new Republican administration and a Republican Congress committed to giving power back to the states, the chance to elect a Republican governor here in Virginia in 2017 brings an opportunity to shake off the economic doldrums of the last eight years, throw out federal and state policies that hinder job creation and stifle our economy, and replace them with lower taxes, less regulation and an education system that produces the well-prepared workers businesses need to grow.

Such policies will foster an environment for a dynamic economy where private-sector job creation is thriving, take-home pay is rising, and people are lifting themselves out of poverty. For too long, the policies of federal and state government have done the opposite.

Obamacare drove up health-care costs and limited many workers to part-time jobs. Dodd–Frank brought an onslaught of financial regulations that constrained access to capital for entrepreneurs. The EPA did all in its power to make energy prices “necessarily skyrocket” and kill jobs by waging a war on coal and preventing oil and gas exploration off our deep-sea coast. Sequestration cost Virginia more than $9 billion in economic activity and tens of thousands of jobs.

Gov. Terry McAuliffe and Lt. Gov. Ralph Northam doubled-down on an outdated, top-down economic development strategy, emphasizing corporate whale hunting and dubious handouts instead of creating the conditions where the private sector can expand and every region of Virginia can capitalize on its distinctive strengths. They wasted four years pushing Obamacare’s Medicaid expansion despite its enormous costs. State agencies acted as extensions of the Washington regulatory state; the administration even attempted to circumvent the legislature to enforce the EPA’s soon-to-be-dead energy restrictions.

The effects of these failures are clear. Five years ago, Virginia ranked first or second on CNBC’s list of best states for business. Under the McAuliffe–Northam administration, we have dropped out of the top 10. Our growth rate in 2014 ranked 48th of 50 states. Our labor-force participation rate hit a 10-year low in 2016.

We must reform our policies, change the tired way of doing things, and make sure we keep the promise of Virginia—and America—alive for the next generation. To do this, we need to enact conservative policies based on constitutional principles of limited, effective government at the federal and state level.

We need to modernize our tax code and cut taxes so families can keep more of their paychecks and small businesses can more easily expand. Congress is working on comprehensive tax reform for the country, and Virginia’s next governor will need to put forward a plan to lower the cost of doing business in Virginia in a meaningful way.

We need to give parents more choices in and control of our children’s education, make college and post-secondary degrees more affordable and align high schools, community colleges and four-year universities to marketplace needs so graduates have the right skills to get good-paying jobs.

It is time to eliminate federal mandates that needlessly drive up college costs and cut the number of strings attached to federal workforce training funding. Virginia colleges and universities need to confer affordable degrees that respond to the demands of the marketplace.

The focus must be on policy changes that promote opportunity for the people—not new stimulus programs or sugar-high press releases touting the number of jobs deals that tend to benefit the rich and powerful or the special interests. Lower taxes, less regulation and a well-prepared and agile workforce are the fundamentals of economic success. The role of government—including the president, Congress and the governor—is to provide a foundation. When that’s done, the private sector can build on it.