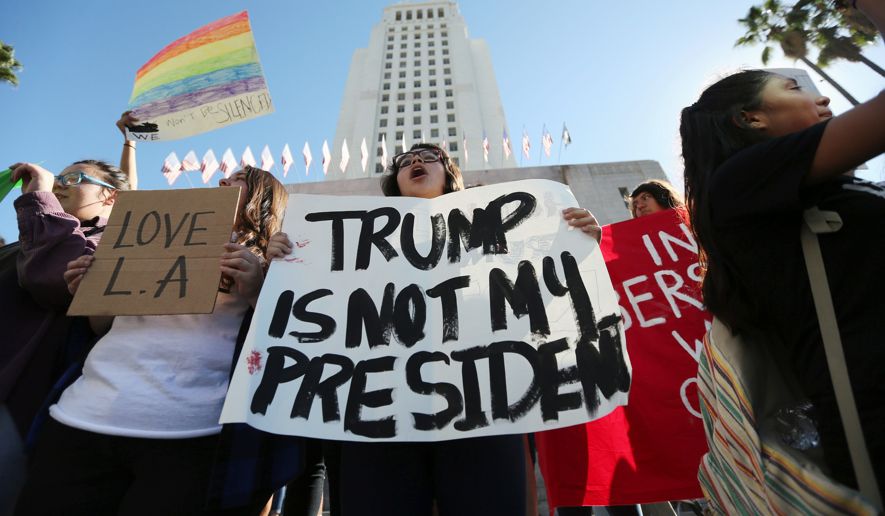 Brat; Republicans Under Orchestrated Attack by the Left

Since Donald Trump won the presidency, the Democrat Party has committed to a strategy of resistance. Three days ago, Virginia Senator and defeated VP-Nominee, Tim Kaine called on Democrats to take the fight against Trump to the streets. While Republican pundits have insinuated that this was a call for violence, I think we all know, deep down, that it was a call for civil unrest (not violence). Understand, on November 8th, all Democrats knew, for sure, that Hillary Clinton was the next President of the United States, that they’d have a chance to take control of SCOTUS for 50 years, that all GOP resistance to the tax, welfare, and regulatory state would be futile for a decade. Then, they woke up to hear that Trump had won and Hillary Clinton couldn’t even wheel her bones to a microphone.

They are angry. I think they are angrier than Republicans were when Obama won. They aren’t going down without a fight.

These same 18-20 protesters have been trolling his social media pages all day, every day, for the last week. Every other Republican Congressman is having their phones blown up by angry liberals armed with the same histrionic talking-points. This is why, last week, I wrote an article encouraging Republicans to call their representatives in D.C. and Richmond and encourage them. The pressure our representatives are feeling is real. The folks working in the local offices of Republican Congressmen are describing last week in language fitting the end of a Shakespearean play.

This is an organized political tactic orchestrated by Tim Kaine, Mark Warner, George Soros, and the DNC. Media in the Commonwealth will be more than happy to cover a handful of protesters, but they’ll never cover rooms packed full of Republican supporters. This partnership between Democrats and the media will serve as wave after wave of resistance and unrest directed at elected Republican officials. The vivacity of these waves will depend on the margin of victory these representatives enjoyed in the last election.

There is a reason why Congresswoman Comstock felt it necessary to immediately come out against Trump’s hiring freeze and vetting orders. There’s a reason why Congressman Dave Brat, the most accessible Congressman in all of Virginia held an emergency online townhall to address constituents caught up in an orchestrated campaign by the Democrat Party smearing Brat for being inaccessible to his constituents. This is what the Alinskites do. They will attack you for your strengths. Democrats in the 1st District have even tried to smear Congressman Wittman as being neglectful of the US military. That would be like saying that Senator Mark Warner neglects the teachers union.

I understand that many of these Democrat protesters are paid to spend their time and energy bullying Republican legislators, but that is no excuse for Republicans to sit on their hands. When the going gets tough, Republicans get busy with something else. We think our job is done the day after an election, when in truth, that is only the beginning of our civic duty. When Republicans fold (as they are folding left and right in the General Assembly today), we get furious with them and call them RINO’s, yet we never consider the fact that their offices are getting thousands of phone calls every day threatening them, demanding they vote against X, Y, and Z, and they have absolutely zero Republican support. What do you expect them to do?

If average Republicans are going to sit on their hands for the next four years, fine. I’ll speak to the Trump voters.

Trump Voters – if you want President Donald Trump to have any chance of fulfilling his promises, then he needs you to call every Republican and Democrat Congressman in the Commonwealth and demand that they support the president. You guys were active during the campaign – not just active. You guys were omnipresent. You couldn’t find a thread without a Trump Supporter whipped into a frenzy on behalf of their candidate. If you want Trump to be successful, then you need to rediscover the energy you had during the campaign and Up…Your…Game!

You discovered your power in 2016. Now is not the time to let up. Now is the time to show America that if they thought you were loud during Trump’s campaign, that they ain’t seen nothing yet!