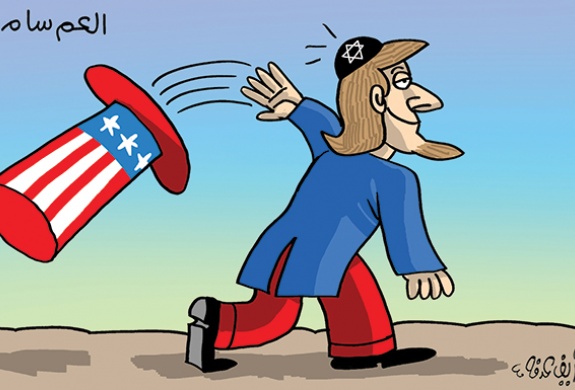 Unless you’ve been living under a rock, you know that the Republican Party of Virginia (RPV) has accused Democrat Leslie Cockburn of “virulent anti-Semitism.”   Cockburn is the Democrat nominee to replace retiring Rep. Tom Garrett in Virginia’s Fifth District Congressional.

RPV’s accusation is based on a book Cockburn co-authored with her husband, Andrew Cockburn. Dangerous Liaison: The Inside Story of the U.S.-Israeli Covert Relationship ostensibly examines and critiques the close relationship between the United States and the state of Israel, a relationship that has flourished under Presidents of both parties since modern Israel’s inception in 1948.

In reality, the book is packed with virtually every cockamamie kooky theory leveled by enemies of Israel and anti-Semites worldwide, eager to prove the age-old suspicion that some sort of Jewish conspiracy is behind virtually all of the world’s evils.  Chief among these slanders is the idea that the U.S. government is essentially little more than an Israeli puppet. As Angelo Codevilla wrote in a contemporaneous review in Commentary:

This book is no less than a history of the world since 1948, with the United States of America cast as the chief evildoer, and Israel as the evil genie. As the Cockburns see it, Israel, playing Iago to America’s Othello, has brought out the worst in this stupid, great power. Israel’s leaders, unprincipled, cynical addicts to military force and dirty tricks, manipulate America through American Jews—’women with blue hair and pseudo-athletic men.’ These Jews have so corrupted America’s politics with their money that U.S. Presidents, too, have been led to betray our national interests by joining in massive coverups of Israeli misdeeds, including the illegal transfer of U.S. military technology on a scale ‘much bigger than [spy Jonathan] Pollard.'”

But Cockburn’s book doesn’t stop there.  It goes on to essentially blame the Jews for the Cold War; for the South American drug trade; for Idi Amin’s reign in Uganda; for the long suffering of the Kurds at the hands of Turks, Arabs, and Persians; and, unbelievably, for Saddam Hussein’s invasion of Kuwait.  Codevilla explains this allegation:

In 1990-91, Saddam Hussein started the Gulf War not out of any desire for Kuwait and Saudi Arabia but because of his belief in ‘a conspiracy between Israel and the U.S. to attack him’—a belief that this book says is ‘correct.'”

The book is replete with much more of this type of lunacy that we won’t address here.  But, you may ask, why is this problematic, and why have Virginia Republicans leveled the charge of anti-Semitism?

Because these types of charges–especially when served up with a slick journalistic veneer and the tut-tutting approval of “respectable” progressives—serve to perpetuate and amplify ancient and ignorant prejudices…the sort of prejudices that have led to pogroms, persecutions, and a Holocaust.  As the Anti-Defamation League explains about similar sentiments expressed in Arab media, these arguments “resonate with an age-old anti-Semitic theme of malevolent Jewish power found in the Protocols of the Elders of Zion, a fabricated document purporting to show Jews scheming to achieve world domination.”

You don’t believe me when I say that Cockburn’s attempt to legitimize these types of slanders is actually harmful?  Don’t believe that they’re anti-Semitic, but instead are just thoughtful “critiques” of U.S. foreign policy?  Well, think again.

Cockburn has defended her own book as “a very good book … a very serious book,” when questioned about allegations of anti-Semitism.  Well, there are a number of neo-Nazis and white nationalists who agree with that sentiment, and a lot of the other things Cockburn has written.

Leslie Cockburn and her writing have been featured on a number of fringe, racist, alt-right blogs. The first, Stormfront, is a prominent online gathering place for neo-Nazis and white supremacists.  Cockburn’s book is used as source material for a number of stereotypical claims that international “Jewry” are behind the scenes, secretly controlling the government of the United States.

Readers may recall that this same website played an active role in pushing the Charlottesville event last year that eventually led to the death of three people. Leslie Cockburn’s work is cited favorably there.  Let that sink in for a while.

The second is the National-Anarchist Movement, a pseudo-anarchism group that advocates for things like “racial separatism” in the United States. This gem of a website appears to devote a significant amount of its space to ideas such as these:

ALTHOUGH people around the world are quite aware of the disproportionate influence of Jewish pressure groups within the various governmental and mass media appendages of Europe and North America, most of which are completely under their control, few are prepared to come out and say so for fear of persecution or incurring the usual threats of ‘anti-Semitism’. It is a fact, however, that ever since ambitious European monarchs first plunged us into the financial vortex of the burgeoning international debt system, an elite coterie of Jews and their allies have effectively manipulated world events for their own interests.”

Sound familiar?  It should.  The authors encourage their readers to learn more by reading Cockburn’s book.

Here’s another, this time from an outfit calling themselves “Overlords of Chaos.”  This charming group of individuals tells us all about the “New World Order” and how everything is unfolding according to the Zionist plot to rule the world.  Leslie Cockburn is cited very favorably for this proposition.

But it doesn’t stop there. In a debate at Oxford in 2007, Cockburn’s co-author did not make any attempt to disguise his and his wife’s ugly conspiracy theories. When speaking on their book, Andrew Cockburn said flatly that “the Israel lobby in the United States dictates American policy.”  Apparently frustrated that he can’t say these things without being “demonized” for hostility to influential Jews, he goes on to whine about the hated power of the so-called “Israel Lobby”:

I mean, you know, we’ve had comparisons of the National Rifle Association lobby, very powerful, supremely powerful in Congress, but you can get up and run for office against the National Rifle Association for gun control and no-one tries to demonise you or drive you out of public life. That’s different with the Israel lobby. It’s across, it’s the Congress, it’s the executive branch and it’s in the culture, in the media.”

Leslie Cockburn is running to represent the Congressional district that includes Charlottesville, and she’s running on a message she says stands opposed to those who brought so much hate to the streets of one of the finest cities in the Commonwealth.  But the record shows that her message instead has resonated with the very people she professes to oppose.

Cockburn’s problematic past has already scared off some of her fellow Democrats (ask yourself why Tim Kaine has repeatedly refused to endorse Leslie Cockburn).  We suspect that it will continue to do so.