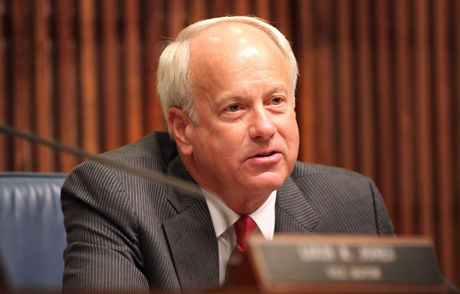 *BREAKING* Mayor of Virginia’s largest city is stepping down

Mayor of VA’s largest city, Will Sessoms, stepping down as Mayor

A ‘huge political announcement’ coming at 11 am was billed on WAVY TV 10 this morning, and sources have now confirmed that Virginia Beach Mayor, Will Sessoms, is resigning from his post as Virginia Beach mayor.

Sessoms, who succeeded the late former mayor Meyera Oberndorf in 2009, has served 2 terms and oversaw tremendous economic growth in the city after the worst recession since the 1930s. However he has not been without controversy, as he was convicted of conflict of interest for his role in several high profile votes where his former employer Towne Bank benefited in land development contracts. Sessoms continued to serve as President on the Towne Bank Board of Directors during his first term as mayor.

Sessoms was formerly a city councilman and vice mayor and was actually endorsed by John McCain’s son Doug McCain. He is rumored to be a candidate for a state level job in transportation, and updates will be made available as this story develops.
*BREAKING* Mayor of Virginia’s largest city is stepping down was last modified: April 18th, 2018 by Guest Contributor Dylan Lloyd

And his pension is figured on the highest position held right?

Yep, and he still gets over 200k a year from townebank