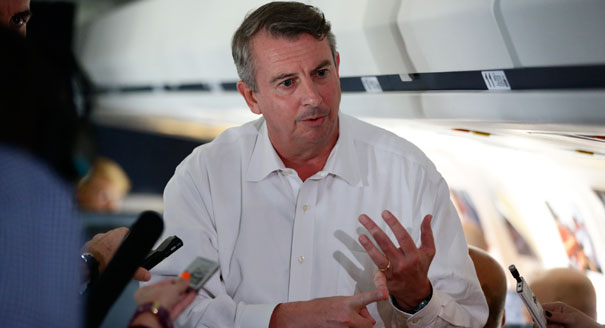 Obenshain Out, Gillespie In for Governor 2017

The DailyPress.com in an as-yet unconfirmed report says that Ed Gillespie will run for Governor in 2017 after Mark Obenshain declined to run.

Obenshain’s aide, Nick Collette, has confirmed that Obenshain will not run for Governor in 2017.  This begs the question, what are Ken Cuccinelli’s plans?  He’s everywhere, at every event, seemingly running for something. Will he challenge Gillespie for Governor?  Or wait and run for Senate in 2018? And, will First District Congressman Rob Wittman, long rumored to be interested in higher office, throw his hat into the ring?

More news as it emerges.

UPDATE: Sources close to the Gillespie camp have indeed indicated Ed is planning a run for Governor, but has not made any decisions to announce a run. The situation, for now, remains fluid.

It should be noted that Gillespie fully supported Obenshain’s 2013 run for Attorney General, and that the two have remained close since then, including when Obenshain was chief surrogate for Gillespie’s 2014 run for U.S. Senate. As had long been rumored, Gillespie was deferring to Obenshain for the 2017 run, and now that Obenshain has stepped back from that, Gillespie will indeed step up.

Gillespie has been a grassroots dynamo in recent months, criss-crossing the state in support of dozens of candidates for local and General Assembly races, building up appreciable amounts of good will in the process.

Obenshain Out, Gillespie In for Governor 2017 was last modified: September 28th, 2015 by Jeanine Martin

Leadership Challenge to be Mounted in Virginia Senate - The Bull Elephant November 9, 2015 at 10:26 am

[…] often is Sen. Bill Stanley (R-Franklin), but also mentioned (now that he’s announced he is not going to run for Governor) is Sen. Mark Obenshain […]

Cuccinelli has not moved on. He’s everywhere at every political event. He’ll definitely run for something.

I hope this augurs a run for U.S. Senate in 2018 for Mark Obenshain.

Businessman and entrepreneur Pete Snyder, the man “in-the-know” state Democrats call the “most dangerous Republican in Virginia,” will run for Governor in 2017 now that Senator Obenshain is out. Snyder — I’ll predict this right here — will defeat Ed Gillespie in a Richmond GOP convention. Other candidates like U.S. Rep. Rob Wittman will be a factor. But head to head -Snyder wins a convention over Gillespie. Remember: I predicted Donald J. Trump would be the GOP nominee back in May — the first to do so. Snyder will be a convention juggernaut. Right time. Right place.

Why would Pete run against the wishes of his closest allies (Obenshain and Gillespie)?

Sorry I missed the funeral…of the person who died and put Gillespie in charge of the VA GOP…or was that K Street? Pete is his own man.

Funny what you miss when you’re otherwise preoccupied online.

Ed. was fine as senator, but all along I’ve been calling Tmac a carpetbagger who only landed in VA due to it being close to DC. The same could be thrown against Ed., and governor is more of a state representative than senator, where he’d be one of 100. I am thinking there is a deal somewhere. Okay, wish Ed. the best, still will vote for him over the Dem. Okay, so it is settled. Ed G. is the next Gov. of VA. Guess I at least sorta have my state back, way better than the present situation, but one more screw up, and I’m moving to NC., where everyone’s Republican.

nobody should be afraid of this … steel sharpens steel.

What about Cantor? He has not gone off gentle into that good night..

Cuccinelli for Senate 2017. Let’s kick Tim Kaine right to the curb. Make him answer for the toll road fiasco, among other things.

not to mention kaine is voting to the left on lenin in the Senate.