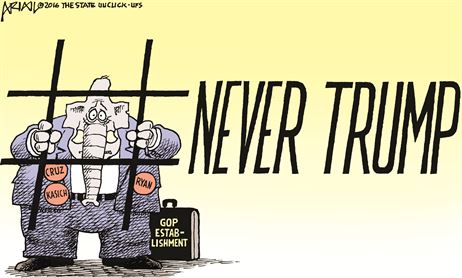 Trump and the GOP establshment

No misprints here. Most of the candidates that publically supported the president’s agenda, and accepted endorsements from him, won.  In fact, 9 of the 11 candidates with whom President Trump campaigned in the final week before the elections, were victorious.

Establishment Republicans that initially resisted the president’s policies in 2017 were more likely to have lost in the 2018 primary or general election, ala Barbara Comstock in the Virginia 10th congressional district.

Republican candidates in the house and senate that enthusiastically aligned themselves as the party of Trump in 2018 were the biggest winners. Between Labor Day and Election Day, President Trump held 30 rallies for 43 candidates in competitive races, drawing nearly half a million people. Most of those candidates won.

While President Trumps’ MAGA rallies clearly did a great deal to energize the Republican base, he was also instrumental in shaping a campaign agenda that greatly enhanced the Republicans’ odds in 2018. A booming economy, rising wages and near full employment headlined that agenda.

For comparison, Barack Obama held just nine rallies for Democrat candidates during his first midterm elections in 2010 and wound up losing 63 seats in the House — costing his party majority control of the chamber — and six seats in the Senate.

Since 1910, the President’s party has lost an average of 30 House seats in midterm elections, meaning the Democrats’ gains in the 2018 elections were merely average, unlike the “blue wave” rhetoric, that they are proffering.

One of the biggest takeaways from the 2108 election that we need to hammer home into 2019 is the slogan of “jobs, not mobs,” reminding voters that the GOP has delivered historic economic prosperity while the Democrats have done nothing but throw fits about President Trump’s many accomplishments.

I think its fair to say that the House of Representatives in the next two years will do absolutely nothing to help the poor, nothing to boost the economy, and nothing to push any additional tax relief for working Americans.

As Republicans begin to look to the 2020 elections, there is a tremendous opportunity to reshape the next hundred years of American history. That is not rhetoric! Two years from today, if the American people could give President Trump 60 Republican Senate seats and a Republican House majority, this country could be transformed back into the beacon of liberty in the world.

In the Presidents first two years with a razor-thin majority in the Senate and a House majority, he was able to turn America back into firm world leadership, from the front, not behind.

The difference between going back to the Obama malaise/mediocrity and a return to American Exceptionalism will not be at President Trump’s feet or the Senates feet. It will be at the discretion of the Republican National Committee. The RNC has not been enthusiastically supportive of the president.

The RNC did not put sufficient resources into many races in the mid-terms. Democrat Virginia Senator Tim Kaines Republican opponent, Corey Stewart, received very little support from the national party, and the results reflected that.

Another HUGE problem for Republican and President Trump is the number of Democrats and NEVER -TRUMPERS still in appointed positions. This has to change. Especially in the Justice and Defense Departments.

The president and the Republican Party cannot effectively govern with Democrat sycophants working against the interests of the President and the American people from the inside.

My personal opinion is that this issue has a more negative effect on serving the American people than even Democrats having control of the House for two years. The Democrats and NEVER TRUMP’ers in the administration have to go as soon as possible.

I’m not going to get depressed over liberals and socialists doing their MOBS NOT JOBS and INVESTIGATE, NOT LEGISLATE agenda in the House. At this moment, it is still very likely that our posterity has a bright future with President Trump and Republicans controlling the future of our country.