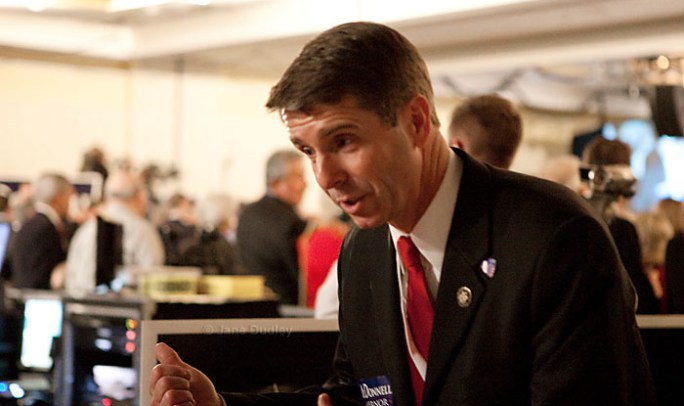 Citing his lone role representing Virginia on the House Armed Services Committee, and the potential to complement former Rep. Randy Forbes if Forbes is named Secretary of the Navy, First District Congressman Rob Wittman today confirmed suspicions that he was not going to formally run for the GOP nomination to replace Governor Terry McAuliffe.

Almost exactly one year ago, at the 2015 RPV Advance at The Homestead Resort, Wittman announced his intentions to seek the Governor’s mansion in 2017. Â Since then, Wittman has had to concentrate on his own 2016 re-election bid while his erstwhile chief rivals, former U.S. Senate nominee Ed Gillespie and Prince William County Board of Supervisors Chairman Corey Stewart, were able to concentrate on raising their own profiles—and stacks of non-federal campaign cash.

A couple of changes in the political landscape appear to have also played a role in Wittman’s recalculation. Â First, Congressional redistricting and Rep. Randy Forbes’ decision to run in the 2nd District (unsuccessfully) instead of defending the newly-redrawn 4th District means that Virginia lost its senior representative on the House Armed Services Committee, a body crucial to the defense industry in Virginia. Â This means that Forbes’ seat as chairman of the Seapower Subcommittee is also opening up, which could give Wittman the opportunity to be Virginia’s senior voice on issues crucial to its economy and security. Â In that role he could potentially complement Forbes, who sources have indicated is in a leading position to become President Trump’s Secretary of the Navy.

Second, the RPV State Central Committee reversed course on the method of nomination for 2017. Â Instead of using a convention, where the affable Wittman’s popularity among grassroots conservatives would have made him a strong contender, the body chose to nominate by a state-run open primary. Â This latter option clearly favors candidates with the time and wherewithal to raise their name identification and huge piles of cash—something Gillespie and Stewart have a good head start in doing relative to Wittman. Â In such a scenario, Wittman, together with future also-ran Sen. Frank Wagner (R-Virginia Beach), would serve as spoilers to frontrunner Ed Gillespie to the benefit of Corey Stewart.

For this reason, Wittman’s departure is a blow to segment of the party uncomfortable with other options, and probably benefits Gillespie more than the other candidates.

However, Wittman appears to not have taken his eye off a potential future run for Governor. Â According to multiple sources close to the Congressman, Wittman plans to spend significant time helping the Republican nominee win in 2017, and thenÂ over the next four years making sure he gets to know grassroots activists all over the state, helping with fundraisers and events, and speaking at committee meetings and fundraisers. Â According to these sources, a run by Wittman in 2021 very much remains an option. Â With his positioning so far this year, conventional wisdom suggests Wittman is already the frontrunner for that nomination.

In the meantime, a whisper campaign appears to be emerging around Denver Riggleman as a possible maverick candidate for the 2017 contest. Â Allies of the former intelligence officer and current operator of the independent Silverback Distillery have suggested that Riggleman may be preparing a guerrilla outsider campaign to upset the GOP applecart in 2017. Â Political operatives close to Riggleman have suggested he, like Wittman one year ago, may use this weekend’s RPV Advance in Richmond to make a big announcement.

Stay tuned this weekend…TBE will be on hand and in force to cover events at this year’s RPV Advance.

Hmm…original from BD? I suppose there’s a first time for everything. (Just kidding, of course!!). I didn’t get it from there, but will take your word for it and add a photo credit. Thanks for letting us know.

Not a big deal. I just thought it was cool. Jane Dudley took the photo for us.

I just don’t know where there is going to be room between Gillespie and Stewart for anyone else except for a guerilla-type candidate who will just spend millions on ads because this is a primary.