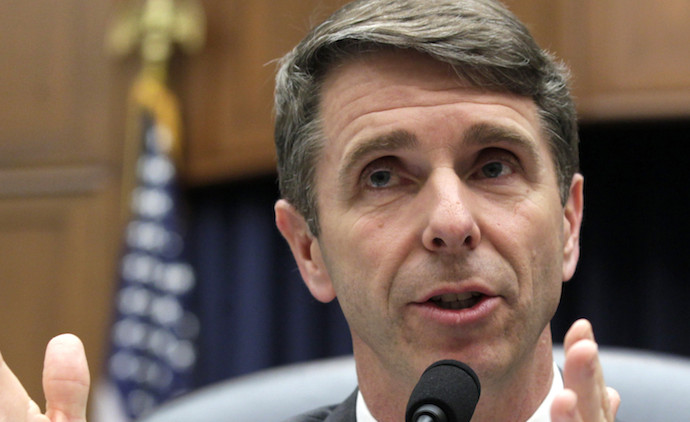 At a breakfast fundraiser in Fredericksburg, Virginia’s Republican Representative from the First District offered his support for Utah Republican Jason Chaffetz to be the next Speaker of the House.  Chaffetz was in attendance as the headliner for the event. 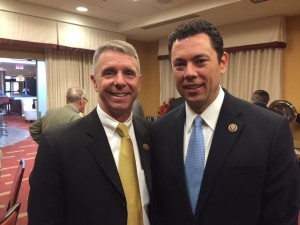 “Jason is the exact type of person we need in Congress as a leader.  I look forward to him being successful in his run for Speaker,” said Wittman to significant applause from the group composed largely of GOP activists and local business leaders.  Chaffetz welcomed the support. “We need a Speaker who speaks,” Chaffetz remarked. “And we want leaders who do what they say they’re going to do.”

Wittman’s announcement comes just two days ahead of the vote among House Republicans to choose their next candidate for Speaker.  Current House Speaker John Boehner (R-OH) last week announced his intention to retire at the end of this month.

Chaffetz has positioned himself as a figure who can unite the factions among House Republicans, capitalizing on his reputation for being fair and level-headed, with a conscientious style of running the House Oversight and Government Reform Committee.

Most Congressional sources indicate that McCarthy is likely to win the Thursday vote of the Republican Conference, though Chaffetz claims to be gaining on McCarthy, in part because of McCarthy’s fumbling of a question about what Republicans in the House have accomplished recently.  The California Republican said in his response that the House investigation into the Benghazi scandal had been launched as a means of damaging Hillary Clinton–a perception that Rep. Trey Gowdy (R-SC) and other Republicans leading the investigation have assiduously guarded against.

However, even if McCarthy wins Thursday’s vote, the key test will come on October 29th, when the election of the next Speaker will come before the full House.  A majority of 218 votes is needed to ensure victory on the first ballot, and Chaffetz claims that at least 50 conservatives—more than needed to deny McCarthy a majority—will refuse to vote for McCarthy.  This could force a reconsideration that could benefit Chaffetz (or the long-shot candidate for Speaker, Florida Rep. Daniel Webster).  Or, it could prompt a deal with Democrats, a number of whom could “take a walk” for the Speaker vote to ensure pro-McCarthy Republicans constitute an absolute majority.

According to numerous sources in Washington and in the First District, the former House of Delegates member is considering a run to return to Richmond in 2017 as Governor.  A spokesman for Wittman declined to comment. [NB: See update below]

UPDATE: The Wittman campaign provided the following statement to The Bull Elephant regarding the possibility of the Congressman running for Governor in 2017:

Rep. Wittman thinks highly of both Senator Obenshain and Mr. Gillespie and has joined them on the campaign trail in the past. Making sure Virginia’s next governor is a Republican is one of his top priorities.

Jason Chaffetz, Trey Gowdy and Paul Ryan would be a great improvement but how about a Virginia Congressman?
Derwin Booker

I’m glad Rob is listening to his constituents on this. I for one, have been calling his office daily since the morning Boehner announced he is retiring. We need an aggressive conservative leader who will take the fight to the Democrats, and can effectively speak to the American people at every opportunity. That person is not Kevin McCarthy.

If the choice is between Chaffetz and McCarthy, I will take Chaffetz hands down. At least he can formulate his thoughts in a public setting. I will be asking Meadows tomorrow at the Leadership Institute breakfast if he supports Chaffetz.Should be interesting.

Nevertheless, Rick, given his record Chaffetz would be a signal that the Republican caucus is intent on playing the same deceptive game with conservatives. We need a clear signal that they instead want to treat us with a new seriousness and honesty. Either Daniel Webster or Tom Price would be preferable in that regard.

How is Daniel Webster more conservative than Chaffetz? Not arguing…I just wouldn’t have thought that based on what I’ve seen on voting records.

Webster has also endorsed Jeb Bush, but Steve you’re right, his voting record is pretty terrible. According to Conservative Review, Chaffetz scores an 82% compared to a 64% for Webster, 74% for Scalise, 72% for Price and 45% for McCarthy (slightly better than Boehner’s 37%).

I would love to see an uprising and have someone like Amash get the nod. The best choice might not actually be the Rep with the best voting record but rather one that is fair and will actually bring the House back to general order versus being driven by ideological motivations, good or bad.

I’m not sure voting record percentages would show Webster is more “conservative” than Chaffetz, but from what I’ve heard and read, many conservatives see Webster as a principled legislator who as Speaker would give conservative concerns fair treatment, whereas they suspect Chaffetz of being yet another opportunist.

This is borne out by their pre-Congressional records — as a state legislator, Webster was very conservative on some issues in Florida; before Congress, Chaffetz was, well Huntsman’s man. Webster has been a quiet and steady, mostly conservative hand in the game for many, many years. Chaffetz has that boy-in-a-hurry look.

But, like you said, Steve, not arguing, just airing some thoughts…

If your interested, dig around a little on line in Utah state party politics and I believe you will find that Chaffetz has closely aligned himself with the state’s conservative headhunters. Does that unequivocally imply that he would bring that to the Speaker’s role, no, but he also had no issue in the House acting as Boehner’s hatchet man, stripping North Carolina Conservative Mark Meadows of his subcommitteee chairmanship, either. I look at the behavior not the vote percentiles which can be very misleading. Webster has no such baggage train trailing behind him.

Chaffetz was the campaign manager for Utah gubernatorial candidate Jon Huntsman in 2004. When Huntsman won the race, Chaffetz became his chief of staff.

Yes, that Jon Huntsman, possibly the most liberal Republican to seek the nomination to run for President prior to John Kasich.

Chaffetz recently showed his colors by firing Congressman Mark Meadows from his committee because of his criticism of Boehner.

This is not good.

If you ever have the opportunity to see the videos, that may be still floating around online, of a couple of local Utah political gatherings including Jason Chaffetz and Mike Lee, take a look they are hilarious. Chaffetz is trying to put the “my buddy arm hug” on Lee for the video recorder and the look on Lee’s face and his body language is screaming where is the hole in the meeting room floor that I can jump into to get away from this guy. It’s Chaffetz’s Utah mentors and his Republican political crony’s that have been the driving force to primary Mike Lee out of his seat, the single most rock solid conservative in the US Senate. I think I might actually prefer McCarthy as he is just another California wimp, that thought if Cantor wrote him up as a “Young Gun” he actually was one!