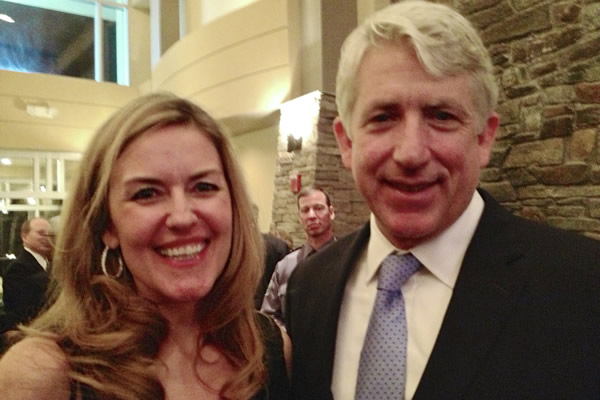 On Thursday state Senator Jennifer Wexton will announce a run for Congress in the 10th district against Congresswoman Barbara Comstock. WextonÂ has been a member of the state Senate since 2014.

The DCCC (Democratic Congressional Campaign Â Committee) had chosen the chair of the Loudoun Board of Supervisors, PhyllisÂ Randlall,Â to run against Comstock. Â When Randall declined WextonÂ was their second choice.

Governor McAuliffe could be a major problem in WextonÂ campaign if he wants his wife to be the DemocraticÂ nominee against Comstock. Â We previously wrote about the possibility of Dorothy McAuliff running against Comstock here.Â Â Will Governor McAuliffe do what he did to Democrat Tom Mulrine in 2015? Â Leesburg lawyer Tom Mulrine had filed to run against Senator Dick Black in the 13th district. Mulrine was working hard to be the nominee and was circulating his petitions to get on the ballot when Governor McAuliffe decided Mulrine could not run and put Dr. Jill McCabe into the race in his place.Â Despite spending $1.6 million Â McCabe lost the race to Dick Black by 5%. Will McAuliffe pull Wexton from the race to insert his wife? Â Or someone else?

With so many other peopleÂ runningÂ in the 10th district as we have reported here, here, and here,Â it will be interesting to see if Wexton’s nomination will be a coronation, (assuming McAuliffe approves) or if one of the grassroots candidates will prevail. Â With Tom’Â Perriello’s Â rise in his bid for Governor, this may be the year that other Democratic grassroots candidates will prevail. Â If so, that could be bad news for the DCCC candidate, Jennifer Wexton.

[…] we have previously reported, here and here, Democrats are lining up to take on Congresswoman Comstock but they will have a difficult […]

This is all just very, very interesting.

More importantly, I think it portends of future Democratic norms in upheaval. They have been marching like Nazi stromtroopers for years. HQ picks a candidate, and the rest fall in line. Now, with an insurgent Left, they have their hands full.

Running against Comstock will be a nice end to Wexton’s career.

I hope you’re right. The problem is Loudoun is developing condos and apartments at a rapid rate. The more densely populated we become, the more that favors the liberals.

Does Wexton actually live in the 10th or is she still using the phony address from her state senate campaign?

She lives in the 10th, Leesburg. She represents the area in the state Senate.

Given the current anger in the Democratic base towards any type of coronation, Ms. McAuliffe would have a very difficult road to travel to get the nomination. Ms. Wexton has to be seen as the odds on favorite to be the Democratic nominee. But if there are alot of challengers, one never knows……..

Until Falconer is removed from Comstock’s campaign there is no hope for others who enter the race. She made a pigs ear into a silk purse with Barbara Comstock. If Falconer wanted to she could get Vogel elected as a ethics candidate and Ed gillispie as a candidate to believe in, thankfully she only works for Babs!