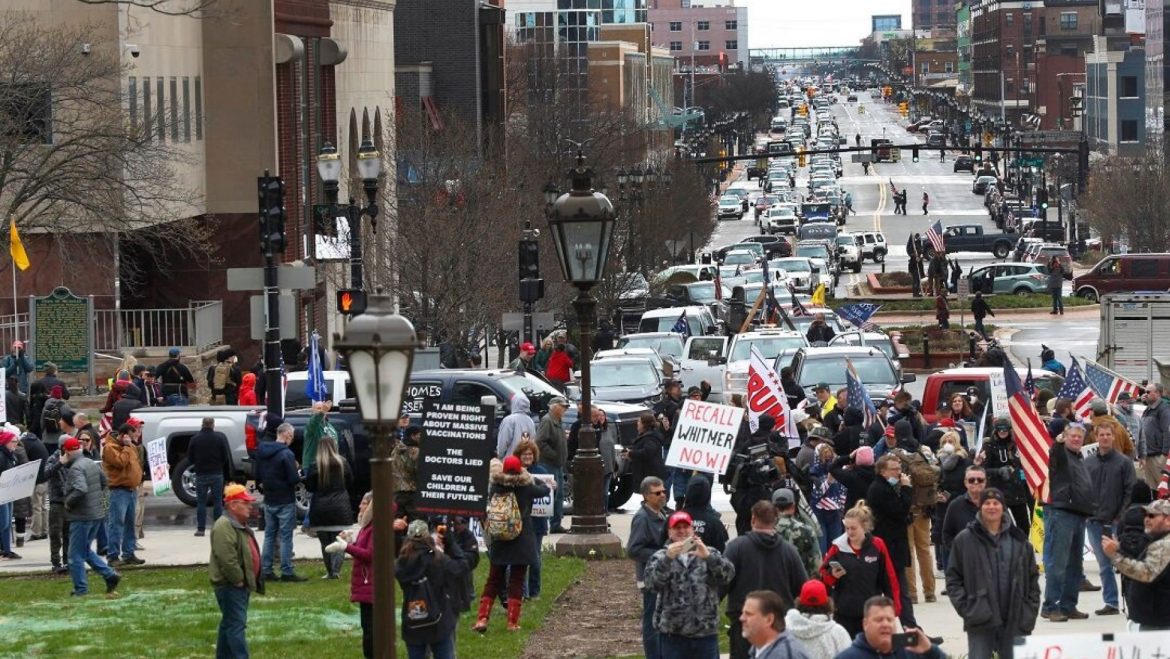 The Corona-virus (i.e., COVID-19) outbreak has reached the breaking-point – not necessarily in numbers of virus-cases or deaths, but economically, from a nearly nation-wide closure of business, which has cut off income for millions of citizens and put over 30 million out of work. As the print- and broadcast-media usually report only the most sensational items related to the shutdown – see opening photo – it is difficult to obtain a coherent overall picture of the situation. Accordingly, I present below a chronology of re-open dates announced by all 50 states, plus the District of Columbia. The political party of each state’s governor is also noted [X].

At this writing, 10 states have issued no shutdown order. Another 15 plan to open on May 1st, under various protocols designed to protect people from the virus. Those 25 states are –

Another 19 states, plus DC, plan to reopen by May 31st; three states will open on June 10th; and three have set no date to reopen. These 26 jurisdictions are as follow:

(** Update: West Virginia Governor Jim Justice says the Stay-at-Home order will be lifted Monday, May 4, and replaced with a new executive order called the “Safer at Home” order.)

We can also construct the following summary, by political party of governors:

What do these data tell us? First – that Republican governors mostly seem inclined to re-open business in their states as early as possible, while Democrat governors prefer to keep things closed longer. Maryland (June 10th) has a Republican governor, but the state’s political slant is strongly Democrat; ditto for West Virginia, which has issued no planned open-date.

We can also see that states in New England (NH, RI, VT, CT) and the Middle Atlantic region (PA, NJ, NY) generally plan to open later. Some of that inclination might be due to high-density populations. But New Hampshire and Vermont are not densely populated, and there are vast, rural areas in Pennsylvania and New York where the need for a general shutdown to prevent spread of the virus seems dubious.

This leaves politics as a likely motivation for extended closure in those areas. Maine – also sparsely populated – re-opened on April 30th. Massachusetts, with a Republican governor, imposed no general shutdown, but all “non-essential” businesses have been ordered closed until May 4th.

Some governors seem to be enjoying their new-found power to control the lives of their citizens. Governor Gavin Newsome of California has just issued an order closing all state parks and all beaches along its thousand-mile coastline. New York Governor Andrew Cuomo – garnering new fame from his daily briefings on the Corona-situation in his state – is inspiring some Democrats to fervently hope that he might somehow take up the torch when fading Joe Biden crashes and burns. And in the once-genteel capital of the Old Confederacy, Governor Ralph Northam is brandishing dictatorial chops that he has kept hidden until now. (Who knew?)

But the natives are restless. At this writing, mass protests over extended business shutdowns have arisen in Pennsylvania, California, Michigan, Ohio, Kentucky, Minnesota, North Carolina and Utah. This is not a complete list. At this writing, a complete tally of states where protests have occurred is impossible to find because Mainstream Media organs – most of which favor extended business-shutdowns – have either ignored the protests or given them scant coverage. Reporters and politicians have labeled protests as “organized Republican political events,” but closer inquiry shows that the participants cross political lines. Millions of people, in desperate financial straits, simply want to get back to work.

Recent days have featured vigorous debates on radio and TV talk-shows about how we can break the business-shutdown stranglehold which has millions of citizens by the throat. Opinions have ranged from “going to court” to “going to the mattresses.” It’s been an education.

From where I’m standing, the court-solution looks like a very slender reed. Conventional wisdom holds that courts are entirely neutral in deciding if laws and executive edicts are Constitutional or not. But wise old bunnies (including Yours Truly) who have watched courts wax and wane on Constitutionality over the years, see court-ordered relief from the disastrous work-stoppage as unreliable. Judges, like all other “civil serpents,” have no dog in this fight because they have no concerns about income. They know those direct-deposits will keep hitting their accounts on payday, no matter how long the hoi polloi are kept idle. In this respect, judges and politicians are all cut from the same cloth.

“Going to the mattresses,” as Don Corleone would put it, might come closer to an effective way to overturn the extended shutdowns that are subjecting millions of people to financial ruin – but probably without the tommy-guns and car-bombs. Today’s tyrannical over-reaches by governors and mayors will likely be stopped by the same kind of “civil disobedience” that helped blacks beat Jim Crow laws and gain full citizenship rights in the South. Those reprehensible laws had been enacted to protect society from incursions of “undesirables.” (Just sayin’…)

At first, the liberal media will oppose the civil disobedience campaign because they believe the extended shutdowns will weaken Mr. Trump and possibly defeat him in the fall. But that opposition won’t last. Most reporters are drawn to a good fight like moths to a flame. Protests are in their blood, and they’ll keep covering them. They won’t be able to help themselves.

As I see it, the saving element in all this is that politicians who espouse extreme policies inevitably go too far. As evidence, consider California Governor Gavin Newsom’s beach-closings. Shutting down California’s prime attraction? Are you kidding me? Think all those beach-bums and bunnies will vote the guv in for another term? Fahgedaboutit.

After enough footage is aired of normal-looking Americans marching, singing and shouting for their right to work and support their families, political opposition from hardline governors will start to fall like trees in a gale. The Constitution contains no provisions for cancelling citizens’ rights because of an illness. We’ve never operated this way before. Let’s nip it in the bud, before any of them gets used to it.

“We must not be led into adopting for ourselves the evils of war in time of peace, upon any pretext whatever. The word ‘civilization’ means not only peace by the non-regimentation of the people such as is required in war. Civilization means that officials and authorities, whether uniformed or not, whether armed or not, are made to realize that they are servants and not masters.” (Winston Churchill, 1936)

Breaking the Stranglehold was last modified: May 2nd, 2020 by Woody Zimmerman